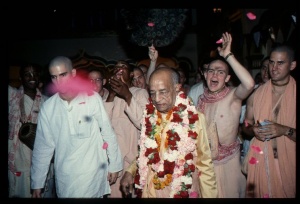 “‘In Dvāpara-yuga the Personality of Godhead appears in a blackish hue. He is dressed in yellow, He holds His own weapons, and He is decorated with the Kaustubha jewel and the mark of Śrīvatsa. That is how His symptoms are described.’

This is a quotation from Śrīmad-Bhāgavatam (SB 11.5.27). The śyāma color is not exactly blackish. Śrīla Bhaktisiddhānta Sarasvatī Ṭhākura compares it to the color of the atasī flower. It is not that Lord Kṛṣṇa Himself appears in a blackish color in all the Dvāpara-yugas. In other Dvāpara-yugas, previous to Lord Kṛṣṇa’s appearance, the Supreme Lord appeared in a greenish body by His own personal expansion. This is mentioned in the Viṣṇu Purāṇa, Hari-vaṁśa and Mahābhārata.