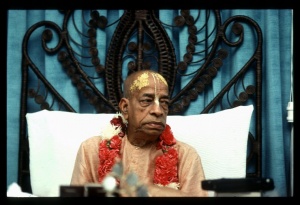 When Kāśī Miśra heard the proposal, he said, “I am very fortunate that Śrī Caitanya Mahāprabhu, the Lord of all prabhus, will stay at my home.”

In this verse the word prabhupāda, referring to Śrī Caitanya Mahāprabhu, is significant. Regarding this, Śrīla Bhaktisiddhānta Sarasvatī Gosvāmī Prabhupāda comments, “Śrī Caitanya Mahāprabhu is the Supreme Personality of Godhead Himself, Śrī Kṛṣṇa, and all His servants address Him as Prabhupāda. This means that there are many prabhus taking shelter under His lotus feet.” The pure Vaiṣṇava is addressed as prabhu, and this address is an etiquette observed between Vaiṣṇavas. When many prabhus remain under the shelter of the lotus feet of another prabhu, the address Prabhupāda is given. Śrī Nityānanda Prabhu and Śrī Advaita Prabhu are also addressed as Prabhupāda. Śrī Caitanya Mahāprabhu, Śrī Advaita Prabhu and Śrī Nityānanda Prabhu are all viṣṇu-tattva, the Supreme Personality of Godhead, Lord Viṣṇu. Therefore all living entities are under Their lotus feet. Lord Viṣṇu is the eternal Lord of everyone, and the representative of Lord Viṣṇu is the Lord’s confidential servant. Such a person acts as the spiritual master for neophyte Vaiṣṇavas; therefore the spiritual master is as respectable as Śrī Kṛṣṇa Caitanya or Lord Viṣṇu Himself. For this reason the spiritual master is addressed as Oṁ Viṣṇupāda or Prabhupāda. The ācārya, the spiritual master, is generally respected by others as Śrīpāda, and the initiated Vaiṣṇavas are addressed as Prabhu. Prabhu, Prabhupāda and Viṣṇupāda are described in revealed scriptures like Śrīmad-Bhāgavatam, Caitanya-caritāmṛta and Caitanya-bhāgavata. In this regard, these scriptures present evidence accepted by unalloyed devotees.

The prākṛta-sahajiyās are not even worthy of being called Vaiṣṇavas. They think that only caste gosvāmīs should be called Prabhupāda. Such ignorant sahajiyās call themselves vaiṣṇava-dāsa-anudāsa, which means the servant of the servant of the Vaiṣṇavas (CC Madhya 13.80). However, they are opposed to addressing a pure Vaiṣṇava as Prabhupāda. In other words, they are envious of a bona fide spiritual master who is addressed as Prabhupāda, and they commit offenses by considering a bona fide spiritual master an ordinary human being or a member of a certain caste. Śrīla Bhaktisiddhānta Sarasvatī Ṭhākura describes such sahajiyās as most unfortunate. Because of their misconceptions, they fall into a hellish condition.