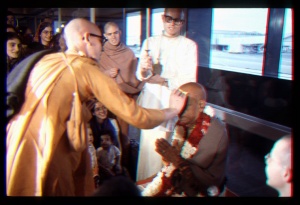 The most famous and formidable transcendental literature is the book named Gopāla-campū. In this book the eternal pastimes of the Lord are established, and the transcendental mellows enjoyed in Vṛndāvana are completely described.

In his Anubhāṣya, Śrīla Bhaktisiddhānta Sarasvatī Ṭhākura gives the following information about the Gopāla-campū. The Gopāla-campū is divided into two parts. The first part is called the eastern wave, and the second part is called the northern wave. In the first part there are thirty-three supplications and in the second part thirty-seven supplications. In the first part, completed in 1510 Śakābda (A.D. 1588), the following subject matters are discussed: (1) Vṛndāvana and Goloka; (2) the killing of the Pūtanā demon, the gopīs’ returning home under the instructions of mother Yaśodā, the bathing of Lord Kṛṣṇa and Balarāma, snigdha-kaṇṭha and madhu-kaṇṭha; (3) the dream of mother Yaśodā; (4) the Janmāṣṭamī ceremony; (5) the meeting between Nanda Mahārāja and Vasudeva, and the killing of the Pūtanā demon; (6) the pastimes of awakening from bed, the deliverance of the demon Śakaṭa, and the name-giving ceremony; (7) the killing of the Tṛṇāvarta demon, Lord Kṛṣṇa’s eating dirt, Lord Kṛṣṇa’s childish naughtiness, and Lord Kṛṣṇa as a thief; (8) churning of the yogurt, Kṛṣṇa’s drinking from the breast of mother Yaśodā, the breaking of the yogurt pot, Kṛṣṇa bound with ropes, the deliverance of the two brothers (Yamalārjuna) and the lamentation of mother Yaśodā; (9) entering Śrī Vṛndāvana; (10) the killing of Vatsāsura, Bakāsura and Vyomāsura; (11) the killing of Aghāsura and the bewilderment of Lord Brahmā; (12) the tending of the cows in the forest; (13) taking care of the cows and chastising the Kāliya serpent; (14) the killing of Gardabhāsura (the ass demon), and the praise of Kṛṣṇa; (15) the previous attraction of the gopīs; (16) the killing of Pralambāsura and the eating of the forest fire; (17) the gopīs’ attempt to approach Kṛṣṇa; (18) the lifting of Govardhana Hill; (19) bathing Kṛṣṇa with milk; (20) the return of Nanda Mahārāja from the custody of Varuṇa and the vision of Goloka Vṛndāvana by the gopas; (21) the performance of the rituals in Kātyāyanī-vrata and the worship of the goddess Durgā; (22) the begging of food from the wives of the brāhmaṇas performing sacrifices; (23) the meeting of Kṛṣṇa and the gopīs; (24) Kṛṣṇa’s enjoying the company of the gopīs, the disappearance of Rādhā and Kṛṣṇa from the scene, and the search for Them by the gopīs; (25) the reappearance of Kṛṣṇa; (26) the determination of the gopīs; (27) pastimes in the waters of the Yamunā; (28) the deliverance of Nanda Mahārāja from the clutches of the serpent; (29) various pastimes in solitary places; (30) the killing of Śaṅkhacūḍa and the Hori; (31) the killing of Ariṣṭāsura; (32) the killing of the Keśī demon; (33) the appearance of Śrī Nārada Muni and a description of the year in which the book was completed.

In the second part, known as Uttara-campū, the following subject matters are discussed: (1) attraction for Vrajabhūmi; (2) the cruel activities of Akrūra; (3) Kṛṣṇa’s departure for Mathurā; (4) a description of the city of Mathurā; (5) the killing of Kaṁsa; (6) Nanda Mahārāja’s separation from Kṛṣṇa and Balarāma; (7) Nanda Mahārāja’s entrance into Vṛndāvana without Kṛṣṇa and Balarāma; (8) the studies of Kṛṣṇa and Balarāma; (9) how the son of the teacher of Kṛṣṇa and Balarāma was returned; (10) Uddhava’s visit to Vṛndāvana; (11) Rādhārāṇī’s talking with the messenger bumblebee; (12) the return of Uddhava from Vṛndāvana; (13) the binding of Jarāsandha; (14) the killing of the yavana Jarāsandha; (15) the marriage of Balarāma; (16) the marriage of Rukmiṇī; (17) seven marriages; (18) the killing of Narakāsura, the taking of the pārijāta flower from heaven and Kṛṣṇa’s marriage to 16,000 princesses; (19) victory over Bāṇāsura; (20) a description of Balarāma’s return to Vraja; (21) the killing of Pauṇḍraka (the imitation Viṣṇu); (22) the killing of Dvivida and thoughts of Hastināpura; (23) departure for Kurukṣetra; (24) how the residents of Vṛndāvana and Dvārakā met at Kurukṣetra; (25) Kṛṣṇa’s consultation with Uddhava; (26) the deliverance of the king; (27) the performance of the Rājasūya sacrifice; (28) the killing of Śālva; (29) Kṛṣṇa’s considering returning to Vṛndāvana; (30) Kṛṣṇa’s revisiting Vṛndāvana; (31) the adjustment of obstructions by Śrīmatī Rādhārāṇī and others; (32) everything completed; (33) the residence of Rādhā and Mādhava; (34) decorating Śrīmatī Rādhārāṇī and Kṛṣṇa; (35) the marriage ceremony of Śrīmatī Rādhārāṇī and Kṛṣṇa; (36) the meeting of Śrīmatī Rādhārāṇī and Kṛṣṇa; and (37) entering Goloka.