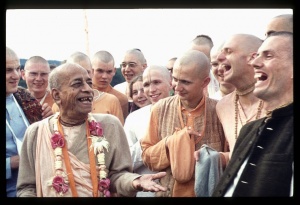 "I have vowed to chant ten million names in a month. I have taken this vow, but now it is nearing its end."

If one regularly chants 333,333 names daily for a month (30 days) and then chants ten more names, he will thus chant ten million names. In this way a devotee worships the Supreme Personality of Godhead. Such worship is called yajña. Yajñaiḥ saṅkīrtana-prāyair yajanti hi su-medhasaḥ: (SB 11.5.32) those whose intelligence is brilliant accept this hari-nāma-yajña, the yajña of chanting the holy name of the Lord. By performing this yajña, one satisfies the Supreme Personality of Godhead and thus attains perfection in spiritual life. According to external vision, Haridāsa Ṭhākura belonged to a Muslim family. Nevertheless, because he engaged himself in performing the yajña of chanting the Hare Kṛṣṇa mahā-mantra, he became a regularly initiated brāhmaṇa. As stated in Śrīmad-Bhāgavatam (SB 3.33.6):

Even if a devotee comes from a family of dog-eaters, if he surrenders to the Personality of Godhead he immediately becomes a qualified brāhmaṇa and is immediately fit to perform yajña, whereas a person born in a family of brāhmaṇas has to wait until completing the reformatory processes before he may be called saṁskṛta, purified. It is further said in Śrīmad-Bhāgavatam (SB 12.1.40):

"In the Age of Kali, mlecchas, or lowborn people who have not undergone the purifying process of saṁskāra, who do not know how to apply that process in actual life, and who are covered by the modes of passion and ignorance will take the posts of administrators. They will devour the citizens with their atheistic activities." A person who is not purified by the prescribed process of saṁskāra is called asaṁskṛta, but if one remains kriyā-hīna even after being purified by initiation—in other words, if one fails to actually apply the principles of purity in his life—he remains an unpurified mleccha or yavana. On the other hand, we find that Haridāsa Ṭhākura, although born in a mleccha or yavana family, became Nāmācārya Haridāsa Ṭhākura because he performed the nāma-yajña a minimum of 300,000 times every day.

Herein we find that Haridāsa Ṭhākura strictly followed his regulative principle of chanting 300,000 names. Thus when the prostitute became restless, he informed her that first he had to finish his chanting and then he would be able to satisfy her. Actually Haridāsa Ṭhākura chanted the holy name of the Lord for three nights continuously and gave the prostitute a chance to hear him. Thus she became purified, as will be seen in the following verses.