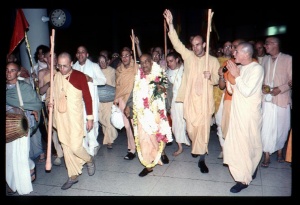 Thus, I, Kṛṣṇadāsa, the servant of Śrīla Rūpa Gosvāmī, have sung of four divisions of the Lord’s pastimes in this chapter: the Lord’s devotion to His mother, His words of madness, His rubbing His face against the walls at night, and His dancing at the appearance of Lord Kṛṣṇa’s fragrance.