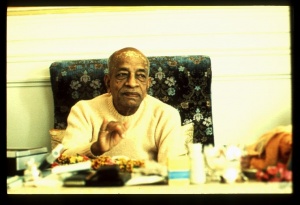 "This introduction is technically called udghātyaka, and the whole scene is called vīthī. You are so expert in dramatic expression that each of my statements before you is like a wave from an ocean of impudence."

In this connection Śrīla Bhaktisiddhānta Sarasvatī Ṭhākura again quotes the following verse from the Sāhitya-darpaṇa (6.288):

Thus the technical names for the five kinds of introductory scenes of the drama are listed as udghātyaka, kathodghāta, prayogātiśaya, pravartaka and avalagita. When Śrīla Rāmānanda Rāya inquired which of these five Śrīla Rūpa Gosvāmī had used to accomplish the technical introduction to his drama Lalita-mādhava, Rūpa Gosvāmī replied that he had used the introduction technically called udghātyaka. According to the Bhāratī-vṛtti, three technical terms used are prarocanā, vīthī and prahasanā. Thus Rūpa Gosvāmī also mentioned vīthī, which is a technical term for a certain type of expression. According to the Sāhitya-darpaṇa (6.520):

The vīthī beginning of a drama consists of only one scene. In that scene, one of the heroes enters the stage, and by means of opposing statements uttered by a voice from the sky (offstage), he introduces the abundant conjugal mellow and other mellows to some degree. In the course of the introduction, all the seeds of the play are planted. This introduction is called udghātyaka because the player dances on the stage. This term also indicates that the full moon enters the stage. In this case, when the word naṭatā ("dancing on the stage") is linked with the moon, its meaning is obscure, but because the meaning becomes very clear when the word naṭatā is linked with Kṛṣṇa, this type of introduction is called udghātyaka.