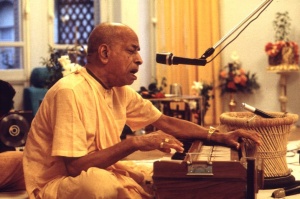 “‘You are a fool,’ he said. ‘You are not qualified to study Vedānta philosophy, and therefore You must always chant the holy name of Kṛṣṇa. This is the essence of all mantras, or Vedic hymns.

Kṛṣṇa is the origin of everything. Therefore when a person is fully Kṛṣṇa conscious it is to be understood that his relationship with Kṛṣṇa has been fully confirmed. Lacking Kṛṣṇa consciousness, one is only partially related with Kṛṣṇa and is therefore not in his constitutional position. Although Śrī Caitanya Mahāprabhu is the Supreme Personality of Godhead Kṛṣṇa, the spiritual master of the entire universe, He nevertheless took the position of a disciple in order to teach by example how a devotee should strictly follow the orders of a spiritual master in executing the duty of always chanting the Hare Kṛṣṇa mahā-mantra. One who is very much attracted to the study of Vedānta philosophy must take lessons from Śrī Caitanya Mahāprabhu. In this age, no one is actually competent to study Vedānta, and therefore it is better that one chant the holy name of the Lord, which is the essence of all Vedic knowledge, as Kṛṣṇa Himself confirms in the Bhagavad-gītā (BG 15.15):

“By all the Vedas, I am to be known. Indeed, I am the compiler of Vedānta, and I am the knower of the Vedas.”

One who imperfectly knows Kṛṣṇa consciousness cannot know Vedānta philosophy. A showy display of Vedānta study without Kṛṣṇa consciousness is a feature of the external energy, māyā, and as long as one is attracted by the inebrieties of this ever-changing material energy, he deviates from devotion to the Supreme Personality of Godhead. An actual follower of Vedānta philosophy is a devotee of Lord Viṣṇu, who is the greatest of the great and the maintainer of the entire universe. Unless one surpasses the field of activities in service to the limited, one cannot reach the unlimited. Knowledge of the unlimited is actual brahma-jñāna, or knowledge of the Supreme. Those who are addicted to fruitive activities and speculative knowledge cannot understand the value of the holy name of Lord Kṛṣṇa, which is always completely pure, eternally liberated and full of spiritual bliss. One who has taken shelter of the holy name of the Lord, which is identical with the Lord, does not have to study Vedānta philosophy, for he has already completed all such study.

One who is unfit to chant the holy name of Kṛṣṇa but thinks that the holy name is different from Kṛṣṇa and thus takes shelter of Vedānta study in order to understand Him must be considered a number one fool, as confirmed by Caitanya Mahāprabhu by His personal behavior, and philosophical speculators who want to make Vedānta philosophy an academic career are also considered to be within the material energy. A person who always chants the holy name of the Lord, however, is already beyond the ocean of nescience, and thus even a person born in a low family who engages in chanting the holy name of the Lord is considered to be beyond the study of Vedānta philosophy. In this connection Śrīmad-Bhāgavatam (SB 3.33.7) states:

“If a person born in a family of dog-eaters takes to the chanting of the holy name of Kṛṣṇa, it is to be understood that in his previous life he must have executed all kinds of austerities and penances and performed all the Vedic yajñas.” Another quotation states:

“A person who chants the two syllables ha-ri has already studied the four Vedas—Sāma, Ṛg, Yajur and Atharva.” Taking advantage of these verses, there are some sahajiyās who, taking everything very cheaply, consider themselves elevated Vaiṣṇavas but do not care even to touch the Vedānta-sūtra or Vedānta philosophy. A real Vaiṣṇava should, however, study Vedānta philosophy, but if after studying Vedānta one does not adopt the chanting of the holy name of the Lord, he is no better than a Māyāvādī. Therefore, one should not be a Māyāvādī, yet one should not be unaware of the subject matter of Vedānta philosophy. Indeed, Caitanya Mahāprabhu exhibited His knowledge of Vedānta in His discourses with Prakāśānanda Sarasvatī. Thus it is to be understood that a Vaiṣṇava should be completely conversant with Vedānta philosophy, yet he should not think that studying Vedānta is all in all and therefore be unattached to the chanting of the holy name. A devotee must know the importance of simultaneously understanding Vedānta philosophy and chanting the holy names. If by studying Vedānta one becomes an impersonalist, he has not been able to understand Vedānta. This is confirmed in the Bhagavad-gītā (BG 15.15). Vedānta means “the end of knowledge.” The ultimate end of knowledge is knowledge of Kṛṣṇa, who is identical with His holy name. Cheap Vaiṣṇavas (sahajiyās) do not care to study the Vedānta philosophy as commented upon by the four ācāryas. In the Gauḍīya-sampradāya there is a Vedānta commentary called the Govinda-bhāṣya, but the sahajiyās consider such commentaries to be untouchable philosophical speculation, and they consider the ācāryas to be mixed devotees. Thus they clear their way to hell.