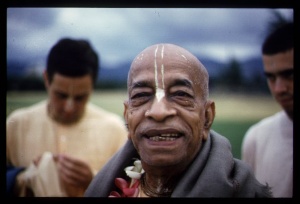 The argument of Śrī Caitanya Mahāprabhu described in this verse can be very easily understood even by a common man if he simply thinks of the activities of the sun, which has been giving off unlimited amounts of heat and light since time immemorial and yet has not even slightly decreased in power. Modern science believes that it is by sunshine that the entire cosmic manifestation is maintained, and actually one can see how the actions and reactions of sunshine maintain order throughout the universe. The growth of vegetables and even the rotation of the planets take place due to the heat and light of the sun. Sometimes, therefore, modern scientists consider the sun to be the original cause of creation, not knowing that the sun is only a medium, for it is also created by the supreme energy of the Supreme Personality of Godhead. Aside from the sun and the touchstone, there are many other material things that transform their energy in different ways and yet remain as they are. It is not necessary, therefore, for the original cause, the Supreme Personality of Godhead, to change due to the changes or transformations of His different energies.

The falsity of Śrīpāda Śaṅkarācārya's explanation of vivarta-vāda and pariṇāma-vāda has been detected by the Vaiṣṇava ācāryas, especially Jīva Gosvāmī, whose opinion is that actually Śaṅkara did not understand the Vedānta-sūtra. In Śaṅkara's explanation of one sūtra, ānanda-mayo 'bhyāsāt, he has interpreted the affix mayaṭ with such word jugglery that this very explanation proves that he had little knowledge of the Vedānta-sūtra but simply wanted to support his impersonalism through the aphorisms of the Vedānta philosophy. Actually, however, he failed to do so because he could not put forward strong arguments. In this connection, Śrīla Jīva Gosvāmī cites the phrase brahma pucchaṁ pratiṣṭhā (Taittirīya Upaniṣad 2.5), which gives Vedic evidence that Brahman is the origin of everything. In explaining this verse, Śrīpāda Śaṅkarācārya interpreted various Sanskrit words in such a way that he implied, according to Jīva Gosvāmī, that Vyāsadeva had very little knowledge of higher logic. Such unscrupulous deviation from the real meaning of the Vedānta-sūtra has created a class of men who by word jugglery try to derive various indirect meanings from the Vedic literatures, especially the Bhagavad-gītā. One of them has even explained that the word kurukṣetra refers to the body. Such interpretations imply, however, that neither Lord Kṛṣṇa nor Vyāsadeva had a proper sense of word usage or etymological adjustment. They lead one to assume that since Lord Kṛṣṇa could not personally sense the meaning of what He was speaking and Vyāsadeva did not know the meaning of what he was writing, Lord Kṛṣṇa left His book to be explained later by the Māyāvādīs. Such interpretations merely prove, however, that their proponents have very little philosophical sense.

Instead of wasting one's time falsely deriving such indirect meanings from the Vedānta-sūtra and other Vedic scriptures, one should accept the words of these books as they are. In presenting the Bhagavad-gītā As It Is, therefore, we have not changed the meaning of the original words. Similarly, if one studies the Vedānta-sūtra as it is, without whimsical and capricious adulteration, one can understand the Vedanta-sūtra very easily. Śrīla Vyāsadeva therefore explains the Vedānta-sūtra, beginning from the first sūtra, janmādy asya yataḥ, in his Śrīmad-Bhāgavatam (SB 1.1.1):

"I meditate upon Him [Lord Śrī Kṛṣṇa], the transcendent reality, who is the primeval cause of all causes, from whom all manifested universes arise, in whom they dwell, and by whom they are destroyed. I meditate upon that eternally effulgent Lord, who is directly and indirectly conscious of all manifestations and yet is fully independent." The Supreme Personality of Godhead knows very well how to do everything perfectly. He is abhijña, always fully conscious. The Lord therefore says in the Bhagavad-gītā (BG 7.26) that He knows everything, past, present and future, but that no one but a devotee knows Him as He is. Therefore, the Absolute Truth, the Personality of Godhead, is at least partially understood by devotees of the Lord, but the Māyāvādī philosophers, who unnecessarily speculate to understand the Absolute Truth, simply waste their time.