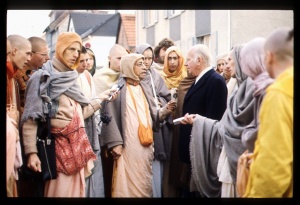 The Lord said, “Vedānta philosophy consists of words spoken by the Supreme Personality of Godhead Nārāyaṇa in the form of Vyāsadeva.

The Vedānta-sūtra, which consists of aphorisms revealing the method of understanding Vedic knowledge, is the concise form of all Vedic knowledge. It begins with the words athāto brahma jijñāsā: “Now is the time to inquire about the Absolute Truth.” The human form of life is especially meant for this purpose, and therefore the Vedānta-sūtra very concisely explains the human mission. This is confirmed by the words of the Vāyu and Skanda Purāṇas, which define a sūtra as follows:

“A sūtra is a compilation of aphorisms that expresses the essence of all knowledge in a minimum of words. It must be universally applicable and faultless in its linguistic presentation.” Anyone familiar with such sūtras must be aware of the Vedānta-sūtra, which is well known among scholars by the following additional names: (1) Brahma-sūtra, (2) Śārīraka, (3) Vyāsa-sūtra, (4) Bādarāyaṇa-sūtra, (5) Uttara-mīmāṁsā and (6) Vedānta-darśana.

There are four chapters (adhyāyas) in the Vedānta-sūtra, and there are four divisions (pādas) in each chapter. Therefore the Vedānta-sūtra may be referred to as ṣoḍaśa-pāda, or sixteen divisions of aphorisms. The theme of each and every division is fully described in terms of five different subject matters (adhikaraṇas), which are technically called pratijñā, hetu, udāharaṇa, upanaya and nigamana. Every theme must necessarily be explained with reference to pratijñā, or a solemn declaration of the purpose of the treatise. The solemn declaration given in the beginning of the Vedānta-sūtra is athāto brahma jijñāsā, which indicates that this book was written with the solemn declaration to inquire about the Absolute Truth. Similarly, reasons must be expressed (hetu), examples must be given in terms of various facts (udāharaṇa), the theme must gradually be brought nearer for understanding (upanaya), and finally it must be supported by authoritative quotations from the Vedic śāstras (nigamana).

According to the great dictionary compiler Hemacandra, also known as Koṣakāra, Vedānta refers to the purport of the Upaniṣads and the Brāhmaṇa portion of the Vedas. Professor Apte, in his dictionary, describes the Brāhmaṇa portion of the Vedas as that portion which states the rules for employment of hymns at various sacrifices and gives detailed explanations of their origin, sometimes with lengthy illustrations in the form of legends and stories. It is distinct from the mantra portion of the Vedas. Hemacandra says that the supplement of the Vedas is called the Vedānta-sūtra. Veda means knowledge, and anta means the end. In other words, proper understanding of the ultimate purport of the Vedas is called Vedānta knowledge. Such knowledge, as given in the aphorisms of the Vedānta-sūtra, must be supported by the Upaniṣads.

According to learned scholars, there are three different sources of knowledge, which are called prasthāna-traya. According to these scholars, Vedānta is one of such sources, for it presents Vedic knowledge on the basis of logic and sound arguments. In the Bhagavad-gītā (BG 13.5) the Lord says, brahma-sūtra-padaiś caiva hetumadbhir viniścitaiḥ: “Understanding of the ultimate goal of life is ascertained in the Brahma-sūtra by legitimate logic and argument concerning cause and effect.” Therefore the Vedānta-sūtra is known as nyāya-prasthāna, the Upaniṣads are known as śruti-prasthāna, and the Gītā, Mahābhārata and Purāṇas are known as smṛti-prasthāna. All scientific knowledge of transcendence must be supported by śruti, smṛti and a sound logical basis.

It is said that both the Vedic knowledge and the supplement of the Vedas called the Sātvata-pañcarātra emanated from the breathing of Nārāyaṇa, the Supreme Personality of Godhead. The Vedānta-sūtra aphorisms were compiled by Śrīla Vyāsadeva, a powerful incarnation of Śrī Nārāyaṇa, although it is sometimes said that they were compiled by a great sage named Apāntaratamā. The Pañcarātra and Vedānta-sūtra, however, express the same opinions. Śrī Caitanya Mahāprabhu therefore confirms that there is no difference in opinion between the two, and He declares that because the Vedānta-sūtra was compiled by Śrīla Vyāsadeva, it may be understood to have emanated from the breathing of Śrī Nārāyaṇa. Śrīla Bhaktisiddhānta Sarasvatī Ṭhākura comments that while Vyāsadeva was compiling the Vedānta-sūtra, seven of his great saintly contemporaries were also engaged in similar work. These saints were Ātreya Ṛṣi, Āśmarathya, Auḍulomi, Kārṣṇājini, Kāśakṛtsna, Jaimini and Bādarī. In addition, it is stated that Pārāśarī and Karmandī-bhikṣu also discussed the Vedānta-sūtra aphorisms before Vyāsadeva.