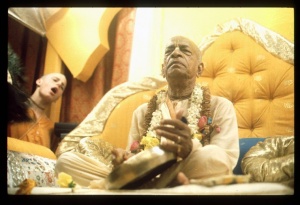 “Where am I, a small creature of seven spans the measure of my own hand? I am enclosed in the universe composed of material nature, the total material energy, false ego, ether, air, water and earth. And what is Your glory? Unlimited universes pass through the pores of Your body just like particles of dust passing through the opening of a window.”

When Lord Brahmā, after having stolen all Kṛṣṇa’s calves and cowherd boys, returned and saw that the calves and boys were still roaming with Kṛṣṇa, he offered this prayer (SB 10.14.11) in his defeat. A conditioned soul, even one so great as Brahmā, who manages the affairs of the entire universe, cannot compare to the Personality of Godhead, for He can produce numberless universes simply by the spiritual rays emanating from the pores of His body. Material scientists should take lessons from the utterances of Śrī Brahmā regarding our insignificance in comparison to God. In these prayers of Brahmā there is much to learn for those who are falsely puffed up by the accumulation of power.