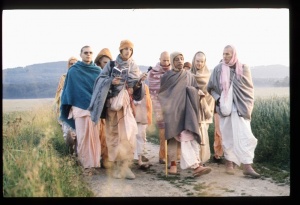 “O my Lord, those influenced by demoniac principles cannot realize You, although You are clearly the Supreme by dint of Your exalted activities, forms, character and uncommon power, which are confirmed by all the revealed scriptures in the quality of goodness and the celebrated transcendentalists in the divine nature.”

This is a verse from the Stotra-ratna (12) of Yāmunācārya, the spiritual master of Rāmānujācārya. The authentic scriptures describe the transcendental activities, features, form and qualities of Kṛṣṇa, and Kṛṣṇa explains Himself in the Bhagavad-gītā, the most authentic scripture in the world. He is further explained in Śrīmad-Bhāgavatam, which is considered the explanation of the Vedānta-sūtra. Lord Kṛṣṇa is accepted as the Supreme Personality of Godhead by these authentic scriptures, not simply by vox populi. In the modern age a certain class of fools think that they can vote anyone into the position of God, as they can vote a man into the position of a political executive head. But the transcendental Supreme Personality of Godhead is perfectly described in the authentic scriptures. In the Bhagavad-gītā the Lord says that only fools deride Him, thinking that anyone can speak like Kṛṣṇa.

Even according to historical references, Kṛṣṇa’s activities are most uncommon. Kṛṣṇa has affirmed, “I am God,” and He has acted accordingly. Māyāvādīs think that everyone can claim to be God, but that is their illusion, for no one else can perform such extraordinary activities as Kṛṣṇa. When He was a child on the lap of His mother, He killed the demon Pūtanā. Then He killed the demons Tṛṇāvarta, Vatsāsura and Baka. When He was a little more grown up, He killed the demons Aghāsura and Ṛṣabhāsura. Therefore God is God from the very beginning. The idea that someone can become God by meditation is ridiculous. By hard endeavor one may realize his godly nature, but he will never become God. The asuras, or demons, who think that anyone can become God, are condemned.

The authentic scriptures are compiled by personalities like Vyāsadeva, Nārada, Asita and Parāśara, who are not ordinary men. All the followers of the Vedic way of life have accepted these famous personalities, whose authentic scriptures conform to the Vedic literature. Nevertheless, the demoniac do not believe their statements, and they purposely oppose the Supreme Personality of Godhead and His devotees. Today it is fashionable for common men to write whimsical words as so-called incarnations of God and be accepted as authentic by other common men. This demoniac mentality is condemned in the Seventh Chapter of the Bhagavad-gītā, wherein it is said that those who are miscreants and the lowest of mankind, who are fools and asses, cannot accept the Supreme Personality of Godhead because of their demoniac nature. They are compared to ulūkas, or owls, who cannot open their eyes in the sunlight. Because they cannot bear the sunlight, they hide themselves from it and never see it. They cannot believe that there is such illumination.