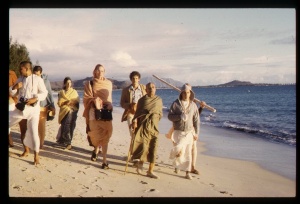 O son of Pṛthā, those who are not deluded, the great souls, are under the protection of the divine nature. They are fully engaged in devotional service because they know Me as the Supreme Personality of Godhead, original and inexhaustible.

The mahātmā does not divert his attention to anything outside Kṛṣṇa, because he knows perfectly well that Kṛṣṇa is the original Supreme Person, the cause of all causes. There is no doubt about it. Such a mahātmā, or great soul, develops through association with other mahātmās, pure devotees. Pure devotees are not even attracted by Kṛṣṇa's other features, such as the four-armed Mahā-Viṣṇu. They are simply attracted by the two-armed form of Kṛṣṇa. They are not attracted to other features of Kṛṣṇa, nor are they concerned with any form of a demigod or of a human being. They meditate only upon Kṛṣṇa in Kṛṣṇa consciousness. They are always engaged in the unswerving service of the Lord in Kṛṣṇa consciousness.