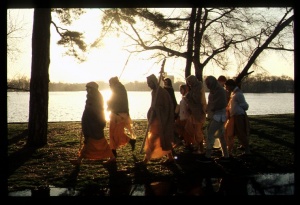 O son of Kuntī [Arjuna], I am the taste of water, the light of the sun and the moon, the syllable om in the Vedic mantras; I am the sound in ether and ability in man.

This verse explains how the Lord is all-pervasive by His diverse material and spiritual energies. The Supreme Lord can be preliminarily perceived by His different energies, and in this way He is realized impersonally. As the demigod in the sun is a person and is perceived by his all-pervading energy, the sunshine, similarly, the Lord, although in His eternal abode, is perceived by His all-pervading, diffusive energies. The taste of water is the active principle of water. No one likes to drink sea water because the pure taste of water is mixed with salt. Attraction for water depends on the purity of the taste, and this pure taste is one of the energies of the Lord. The impersonalist perceives the presence of the Lord in water by its taste, and the personalist also glorifies the Lord for His kindly supplying water to quench man's thirst. That is the way of perceiving the Supreme. Practically speaking, there is no conflict between personalism and impersonalism. One who knows God knows that the impersonal conception and personal conception are simultaneously present in everything and that there is no contradiction. Therefore Lord Caitanya established His sublime doctrine: acintya-bheda and abheda-tattvam-simultaneously one and different.

The light of the sun and the moon is also originally emanating from the brahmajyoti, which is the impersonal effulgence of the Lord. Similarly praṇava or the omkāra transcendental sound used in the beginning of every Vedic hymn to address the Supreme Lord also emanates from Him. Because the impersonalists are very much afraid of addressing the Supreme Lord Kṛṣṇa by His innumerable names, they prefer to vibrate the transcendental sound omkāra. But they do not realize that omkāra is the sound representation of Kṛṣṇa. The jurisdiction of Kṛṣṇa consciousness extends everywhere, and one who knows Kṛṣṇa consciousness is blessed. Those who do not know Kṛṣṇa are in illusion, and so knowledge of Kṛṣṇa is liberation, and ignorance of Him is bondage.