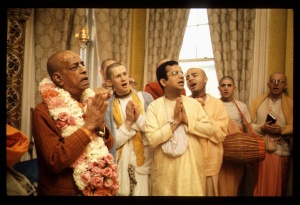 O conqueror of wealth, there is no truth superior to Me. Everything rests upon Me, as pearls are strung on a thread.

The impersonalist puts more stress on the word arūpam. But this arūpam is not impersonal. It indicates the transcendental form of eternity, bliss and knowledge as described in the Brahma-saṁhitā quoted above. Other verses in the Śvetāśvatara Upaniṣad (3.8-9) substantiate this as follows:

"I know that Supreme Personality of Godhead who is transcendental to all material conceptions of darkness. Only he who knows Him can transcend the bonds of birth and death. There is no way for liberation other than this knowledge of that Supreme Person.

"There is no truth superior to that Supreme Person, because He is the supermost. He is smaller than the smallest, and He is greater than the greatest. He is situated as a silent tree, and He illumines the transcendental sky, and as a tree spreads its roots, He spreads His extensive energies."

From these verses one concludes that the Supreme Absolute Truth is the Supreme Personality of Godhead, who is all-pervading by His multi-energies, both material and spiritual.