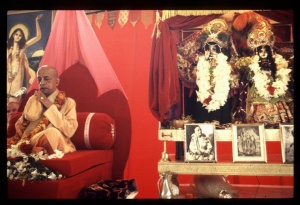 Those who are interested in self-realization, in terms of mind and sense control, offer the functions of all the senses, as well as the vital force [breath], as oblations into the fire of the controlled mind.

The yoga system conceived by Patañjali is referred to herein. In the Yoga-sūtra of Patañjali, the soul is called pratyag-ātmā and parag-ātmā. As long as the soul is attached to sense enjoyment, it is called parag-ātmā. The soul is subjected to the functions of ten kinds of air at work within the body, and this is perceived through the breathing system. The Pātañjala system of yoga instructs one on how to control the functions of the body's air in a technical manner so that ultimately all the functions of the air within become favorable for purifying the soul of material attachment. According to this yoga system, pratyag ātmā is the ultimate goal. This pratyag ātmā is a withdrawal from activities in matter. The senses interact with the sense objects, like the ear for hearing, eyes for seeing, nose for smelling, tongue for tasting, hand for touching, and all of them are thus engaged in activities outside the self. They are called the functions of the prāṇa-vāyu. The apāna-vāyu goes downwards, vyāna-vāyu acts to shrink and expand, samāna-vāyu adjusts equilibrium, udāna-vāyu goes upwards-and when one is enlightened, one engages all these in searching for self-realization.