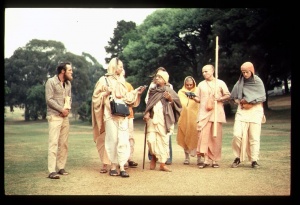 Attraction and repulsion for sense objects are felt by embodied beings, but one should not fall under the control of senses and sense objects because they are stumbling blocks on the path of self-realization.

Those who are in Kṛṣṇa consciousness are naturally reluctant to engage in material sense gratifications. But those who are not in such consciousness should follow the rules and regulations of the revealed scriptures. Unrestricted sense enjoyment is the cause of material encagement, but one who follows the rules and regulations of the revealed scriptures does not become entangled by the sense objects. For example, sex enjoyment is a necessity for the conditioned soul, and sex enjoyment is allowed under the license of marriage ties. For example, according to scriptural injunctions, one is forbidden to engage in sex relationships with any women other than one's wife. All other women are to be considered as one's mother. But, in spite of such injunctions, a man is still inclined to have sex relationships with other women. These propensities are to be curbed; otherwise they will be stumbling blocks on the path of self-realization. As long as the material body is there, the necessities of the material body are allowed, but under rules and regulations. And yet, we should not rely upon the control of such allowances. One has to follow those rules and regulations, unattached to them, because practice of sense gratifications under regulations may also lead one to go astray—as much as there is always the chance of an accident, even on the royal roads. Although they may be very carefully maintained, no one can guarantee that there will be no danger even on the safest road. The sense enjoyment spirit has been current a very long, long time, owing to material association. Therefore, in spite of regulated sense enjoyment, there is every chance of falling down; therefore any attachment for regulated sense enjoyment must also be avoided by all means. But action in the loving service of Kṛṣṇa detaches one from all kinds of sensory activities. Therefore, no one should try to be detached from Kṛṣṇa consciousness at any stage of life. The whole purpose of detachment from all kinds of sense attachment is ultimately to become situated on the platform of Kṛṣṇa consciousness.