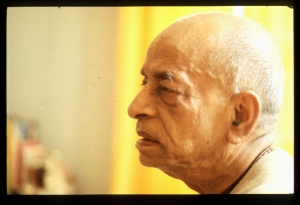 Thus I have explained to you the most confidential of all knowledge. Deliberate on this fully, and then do what you wish to do.

The Lord has already explained to Arjuna the knowledge of brahmabhūta. One who is in the brahma-bhūta condition is joyful; he never laments, nor does he desire anything. That is due to confidential knowledge. Kṛṣṇa also discloses knowledge of the Supersoul. This is also Brahman knowledge, knowledge of Brahman, but it is superior.

Here Lord Kṛṣṇa telIs Arjuna that he can do as he chooses. God does not interfere with the little independence of the living entity. In Bhagavad-gītā, the Lord has explained in all respects how one can elevate his living condition. The best advice imparted to Arjuna is to surrender unto the Supersoul seated within his heart. By right discrimination, one should agree to act according to the order of the Supersoul. That will help one become situated constantly in Kṛṣṇa consciousness, the highest perfectional stage of human life. Arjuna is being directly ordered by the Personality of Godhead to fight. Surrender to the Supreme Personality of Godhead is in the best interest of the living entities. It is not for the interest of the Supreme. Before surrendering, one is free to deliberate on this subject as far as the intelligence goes; that is the best way to accept the instruction of the Supreme Personality of Godhead. Such instruction comes also through the spiritual master, the bona fide representative of Kṛṣṇa.