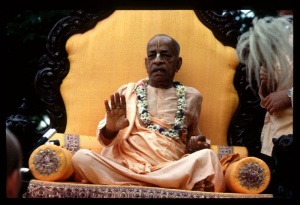 Prabhupāda: They bow down like stick. This is called daṇḍavat. Daṇḍa means "stick"; vat means "like." When you fall down, just like a stick falls, before superior, that is called daṇḍavat. Not by simply saying daṇḍavat . . . eh, one must fall down. So Brahmā fell down, and his four heads touched the lotus feet of Kṛṣṇa, and with ecstasy, and he was crying. It is to be taken as of his head . . . of Kṛṣṇa's lotus feet. Hmm. (break) . . . like a human child, Parabrahma: brahmeti paramātmeti bhagavān iti . . . (SB 1.2.11). The Supreme Lord is narākṛti: like human being. Not catur-bāhu. Nārāyaṇa is catur-bāhu, but the Supreme Person is like human being. (coughs heavily) And why all the authorities said, "Made after war"?

Pradyumna: No, "Man is made in the image of God."

Pradyumna: Then it says that Lord Brahmā very hastily got down from his vāhana, tvareṇa, tvareyā, nija-dho . . . (break) . . . and fell down with his body on the earth. So his iti . . . (break) . . . so there's some . . . there's that rule that the devas never touch the ground when they go. It says, iti niyamola . . . (break) . . . this regulation, he went down . . . he touched the earth because it was Kṛṣṇa. So even of Brahmā . . . (break) The last verse we read was about how Brahmā saw the . . . er, Kṛṣṇa was there, the Supreme Brahman, and then he got down from his carrier, his swan carrier, and he did obeisances, daṇḍavat, and he touched the lotus feet of Kṛṣṇa. And he, he was crying, and so his tears were washing the feet of Kṛṣṇa.

Prabhupāda: . . . cause of everything . . . (indistinct) . . . there's a child loitering in Vṛndāvana, there's morsels of food. That's extraordinary for him.

Pradyumna: Root cause of everything. Point is that it says that he fell down on the ground.

Pradyumna: You commented that there is a rule that the demigods never touch the ground.

Pradyumna: . . . of being a demigod, or it was disappeared?

Prabhupāda: Yes. (break) . . . disappeared. He gave up voluntarily. They have no question. (break)

Pradyumna: Then, ah, he touched Kṛṣṇa's feet with the tips, tip of his helmet or of his crown. So it said with his four tips of his helmets. So it's mentioned that Brahmā has four heads, one head in each direction, so it's commented. He said catur-diks-titam (break) So he put all his heads . . . (break)

Prabhupāda: Although he has got his brain working all round, everything was surrendered to cowherd boy Kṛṣṇa. (break)

Pradyumna: With an effort he put all his . . . he put his forehead on the ground, touched his forehead, lowered his foreheads. (break) Commented, er, it is mentioned that he washed the feet of Kṛṣṇa, with mud-aśru . . .

Pradyumna: So it says why is this word su used, su-jalaiḥ? It says aśru nama bha . . . (break)

Pradyumna: Form of bhakty-anubhāva, or transformation of ecstatic love?

Prabhupāda: Ah, yes. Transformation. That is the right word. (break)

Pradyumna: . . . āste (break) . . . rising up repeatedly. (break) Here there's a verb is used, āste, so patanāste is present tense, varta-manakal. So Śukadeva Goswāmī is narrating it. It should be past tense. So why is . . . this question comes, why is this varta-manakal(?)? Why is this present tense? So it says patan . . . (break) . . . Śukadeva Muni also. (break) . . . making obeisances again and again at the feet of Kṛṣṇa. Utthāyotthāya kṛṣṇasya cirasya pādayoḥ patanāste mahitvaṁ . . . (break)

Prabhupāda: The presence of the Supreme Personality of Godhead just like a human child. That made him astounding. Hmm. Aham ihasi nandaṁ vande yasyālinde paraṁ brahma (CC Madhya 19.96). There is a verse. You know it?

Pradyumna: Yes. It is in the Śrī Caitanya-caritāmṛta.

"Let others study Vedas, Smṛti, Bhārata, Mahābhārata, Bhagavad-gītā and praise all material existence, but I am going to worship Nanda Mahārāja, whose courtyard is being crawled by the Supreme Brahman. Nanda Mahārāja is so great that the Parabrahman is crawling there. So I’ll worship." Aham ihasi nandaṁ vande. Hmm. (break)

Prabhupāda: Hmm. All the invite offered prayers that "Here is the Supreme Person. Naturally you are astounded . . ." (break)

Pradyumna: He is describing Kṛṣṇa. First of all he describes Kṛṣṇa.

Prabhupāda: Prayers by Brahmā to Kṛṣṇa is described . . . (break) Brahmā, instead of glorifying the opulence of Kṛṣṇa, how he arrived to the affection of Nanda Mahārāja, Yaśodā-māyi, that he has specificated many times. (break) And this appreciation cannot be achieved by Vedic knowledge but through the association of pure devotees. (break)

Prabhupāda: Those who have not come from the disciplic succession, they are śrama eva hi kevalam (SB 1.2.8). Their endeavor to understand the supreme authority is simply waste of time, and teṣāṁ kleśa eva vaśiṣyate, their only result is that whatever kleśa, labor for . . . (indistinct) . . . actually, they know that . . . (break) . . . brahmā-vāda . . . (break) . . . but it is very difficult to understand Bhagavān by this speculation, because he is unaware of unlimited transcendental qualities. Hmm. (break) . . . without master, Kṛṣṇa, and nobody can understand Him. The speculative process is futile. (break) Śrī Īśopaniṣad also, anyone who is favored by Kṛṣṇa, he can only understand. (break) . . . this nonsense. (break) Brahmā tried to show his limited opulence. Now he came to the understanding that it is not possible. While offering prayers he tried to rectify the mistake . . . (break) . . . I’m passing stool. (break) . . . it says in Bhagavad-gītā, what is mercy of Kṛṣṇa, they think is imagination. (break) So Brahmā verifier, the eternity of writing transcendental words and the nature of . . . flickering nature of material world. (break) That is also compared in the Bhagavad-gītā, yo me jānāti tattvataḥ . . .

Prabhupāda: Ah, janma karma me divya yo jānāti tattvataḥ. He can be liberated; otherwise not. (break) . . . limited conception of the Absolute Truth is the platform of liberation and bondage. Conditioned soul on the limited platform, he is baddhajib bound up by the laws of liberation and bondage. Liberation means to understand Bhagavān, janma karma me divyam yo jānāti tattvataḥ . . . (break) That liberation can be attained only by devotional service.

Otherwise it is not possible. (break) Actually, the speculative process is not sufficient; it is different from self-realization. (break) The Māyāvādīs, they think this is all imagination, so they give up the real path of progress and remain on this . . . (break) . . . that is the sign of their ignorance. Bhakti udapāśānām. The path of bhakti they give up. Yasyatim bhaktim upāsanā kevala paśyanti ye ke kevaloduram. Kevala udaram. Simply to understand the science, tesam, for them, that labor is only gain and nothing more. (breaks) . . . Kṛṣṇa's mercy, nobody can understand the Absolute Truth. (break) So Brahmā desired, and he thought of living entities in Vṛndāvana, considering their fortune. (break) Hmm.

Pradyumna: Offered himself to the feet of Kṛṣṇa (indistinct Sanskrit), praising Him, bhagavān kī pradakin koriyā, circumbulated the Supreme Lord then went away, prastan korile. Then Kṛṣṇa, brahma prahuta pashu gun ku hey . . . (break) . . . brought back all those calves and boys that had been taken by Brahmā back to the bank, the sandy bank of the Yamunā.