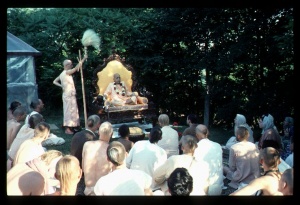 Tamāla Kṛṣṇa: This . . . At noontime you seemed to be getting a little taste. Did you have a little? You said gradually.

Tamāla Kṛṣṇa: So I don't think there is any problem. I mean, what you ate today was more than I saw you eat in three months, Śrīla Prabhupāda. You ate a Love Feast today. So whenever we eat a Love Feast, we never have much appetite in the evening. Usually we simply chant.

Prabhupāda: So I am trying to drink a little fruit juice.

Bhakti-caru: Prabhupāda wanted to drink some of this sweet lemon juice.

Prabhupāda: What do you think?

Tamāla Kṛṣṇa: Maybe your sister can suggest some good drink.

Bhakti-caru: The sweet lemon. I'll just get it, yes.

Tamāla Kṛṣṇa: I'm suggesting that it should be sweet.

Prabhupāda: So keep it. When I require, give me little.

Upendra: So you don't want any now?

Tamāla Kṛṣṇa: Bhakti-caru? Make it, and then keep it ready, and as Prabhupāda wants it . . .

Tamāla Kṛṣṇa: Oh. Ātreya Ṛṣi says it should be made fresh.

Prabhupāda: Yes. That lemon should be preserved, not otherwise.

Tamāla Kṛṣṇa: Utilized. Okay. Keep the lemon. Don't use it for anything else. That's what you have to tell him. Preserve it only for this purpose. That was a very funny joke you told, Śrīla Prabhupāda, about the doctor, con-doctor? Everybody was relishing it.

Prabhupāda: Where is Kīrtanānanda? He is annoyed (avoiding?)? (Tamāla Kṛṣṇa laughs)

Tamāla Kṛṣṇa: Upendra said because he has a night shift, sometimes he rests at this time. You wanted to see him?

Tamāla Kṛṣṇa: Hari-śauri? He's bathing, Śrīla Prabhupāda. (break) . . . comfortably, Śrīla Prabhupāda? (pause) Śrīla Prabhupāda? We . . . In order to finish the Bombay temple, we're making a . . . We're sending some money to them for completion. So we have a committee called the Māyāpur-Vṛndāvana committee. Persons on the committee are Jayapatākā Swami, Girirāja, Gopāla Kṛṣṇa, Ātreya Ṛṣi, Rāmeśvara Mahārāja, Gurukṛpā Mahārāja and myself. That committee was formed by the GBC last Māyāpur festival. So they decided that they would give a loan. Because the BBT was a little short of money . . . The BBT sends the money to Bombay. So the BBT wants to loan some money from the Māyāpur-Vṛndāvana account in Los Angeles, and they'll pay it back with the same bank interest.

Tamāla Kṛṣṇa: Make a loan from Los Angeles to the BBT, and the BBT will repay it with the regular bank interest. Is that all right? Had you given power of attorney, now that the MV trust has approved it, Girirāja and I can sign on your behalf. See, we'll never sign on our own. We only sign after we get authority from the respective committee or from Your Divine Grace.

Tamāla Kṛṣṇa: Make the body centered? Which place is not centered, Śrīla Prabhupāda?

Tamāla Kṛṣṇa: Is that all right? You said you were . . . to the devotees who came to came to see you from the Gauḍīya Maṭha, you said you were mahā-patita. But they said, "Mahā-patita-pāvana." We all appreciated that, Śrīla Prabhupāda. Actually, Śrīla Prabhupāda, I don't think that your Godbrothers really have any bad feelings. If, as you describe, because you had to preach amongst such fallen persons as us, the offense is really on our part, not on yours. I think actually they know that. Of course, they're a little sorry that they could not do what you did, but actually the offense is ours. We are not very trained up. It is not your fault. It is just that we are so fallen that we are only now beginning to learn a little etiquette. So sometimes, not purposely, but because we're very fallen, we sometimes make mistakes and offenses. And because we've taken shelter of Your Divine Grace, you are always giving us protection. (pause) (Yaśodānandana chants Brahma-saṁhitā) (break)

Prabhupāda: . . . they will appreciate tomorrow.

Prabhupāda: Somebody, important man was to come this evening?

Haṁsadūta: An important man was to come this evening? You mean for the conference, Śrīla Prabhupāda? I don't think any men have come yet, Prabhupāda. Svarūpa Dāmodara is here, but I think they're planning to come tomorrow and the following days.

Bhavānanda: Dr. Mishra, I think, is going to inaugurate the conference, and his friend, Dr. Chowdury, have just arrived. We've checked them into their room. They're taking a little prasādam. Svarūpa Dāmodara is with them.

Haṁsadūta: Yes, some men have come.

Paramānanda: We've worked very hard to follow your . . . (indistinct) . . . We're very much encouraged how it's working out. We've been discussing it for many hours here, and it seems like it's going to work out very nicely.

Prabhupāda: The program is there. If you follow, immediately success. You are leaving?

Paramānanda: Also, I would like to offer you the obeisances of Gaura Hari Prabhu and Bhūrijana, who may not be able to come and see you. They're also working very dedicatedly to developing this project, and they wanted very much to come and see you.

Tamāla Kṛṣṇa: His brother is here.

Dhṛṣṭadyumna: My brother is an architect, Śrīla Prabhupāda, and he's helping us to design the community plan for the small village and the temple. He's working very hard to help set up an ideal Vedic community. So . . .

Prabhupāda: Keep always engaged yourself in Kṛṣṇa activity. That is wanted. Jaya.

Tamāla Kṛṣṇa: I was just . . . Everything you say is important to us, so I was just explaining to Jayādvaita Prabhu to make sure that if you speak about these . . . (microphone moving) What would you like? Turning over? Okay.

Prabhupāda: Turn me over occasionally this way and that way, even I do not say.

Tamāla Kṛṣṇa: Oh. Of course, we'll ask you first, but we'll do it.

Svarūpa Dāmodara: For the Institute?

Prabhupāda: Some place in Delhi for Institute.

Svarūpa Dāmodara: No. They haven't offered that place. Did they? No.

Tamāla Kṛṣṇa: No. It was what you told Prabhupāda earlier.

Svarūpa Dāmodara: No, they didn't offer a place, but they wanted to help to establish a center for the Bhaktivedanta Institute.

Prabhupāda: How to help?

Svarūpa Dāmodara: Various ways—money and supporting us. They said it's very essential.

Prabhupāda: Who supported with money? Will they helpful with money, or what sort of support?

Svarūpa Dāmodara: Actually, he was speaking in general terms. This Professor Malsanda, he's the head of the Physiology Department in the All-India Institute of Medical Sciences. He's a very religious man. He's also a very well known scholar. He's medical doctor by profession. Also he belongs to many different scientific worldwide organizations, and he feels very strongly that we should have a center in Delhi for the Bhaktivedanta Institute.

Prabhupāda: So money is required.

Svarūpa Dāmodara: So he didn't say anything specifically, but he said he would be very happy to help us in establishing a center there. He's very favorable to our philosophy, and he invited me to his own home, and we discussed at great length about the philosophy that we are trying to present in the scientific community, and he feels that it's very genuine and we should . . . They should help us to push forward.

Prabhupāda: So with this cooperation, this Institution will be very prestigious. So if it is possible, organize. But don't overburden.

Tamāla Kṛṣṇa: What is that overburden?

Prabhupāda: Other business may not suffer.

Tamāla Kṛṣṇa: Hmm. Publishing books should not suffer, and lecturing, like that.

Prabhupāda: We have already place in Bombay.

Prabhupāda: So if Bombay is sufficient, don't bother in Delhi.

Svarūpa Dāmodara: Yes. I will do it slowly, first of all to make sure that whatever we have done is going on nicely; then we can expand later on. But in India it is true that everybody I met, very respectful to Śrīla Prabhupāda's movement and to what we are trying to do.

Prabhupāda: Yes. That much we want to keep. The people may not think of it as bogus.

Svarūpa Dāmodara: Our chief guest for tomorrow has already arrived. And he's very impressed. I took a tour of our temples, also the gurukula. And they're very impressed with the whole building and the whole program that we have here. Very nice. He brought also an architect. He's a retired engineer, Chowdury from . . . together. Also we already have a mathematician from Delhi University for tomorrow. So I took three of them tour of our temple and gave them nice prasāda. They were very impressed.

Prabhupāda: In the beginning, when I was selling Back to Godhead alone, one practical businessman, Mr. Bande(?) I think, he said, "Swāmījī, why you have made Vṛndāvana headquarter? (laughs) It is not a place for . . ." (break)

Svarūpa Dāmodara: . . . conference place in Vṛndāvana, they said the selection is ideal. Said this type of conference should start from Vṛndāvana. They feel that way, many of them. Yesterday Mishra, Dr. Mishra . . . He's the head of the Biophysics Department in the All-India Institute, Medical Sciences. He called me to his home, and I went and we had about half an hour discussion. He told me that he wanted to do this by himself for a long time several years ago. Then somehow, when he saw our flyer, his wife told him that "You've been trying to do like this for so many years, but somebody has started doing it." So she told him, "You must join them." So actually he wanted to come from tomorrow, but some people are coming from Germany, 'cause he has a big grant. He's actually internationally well known scientist. But he's coming on Sunday, and he's also going to speak about half an hour.

Tamāla Kṛṣṇa: Is he bringing his German friends?

Svarūpa Dāmodara: No. His German friends are busy touring all over India to make sure that when they get grant, everything goes okay.

Tamāla Kṛṣṇa: It sounds like this Bhaktivedanta Institute might get a . . . maybe get some grant sometime, eh?

Svarūpa Dāmodara: Yes. Once we get incorporated in Bombay, then we can also get some grants from the government, also in the United States when we get it properly established. And the word bhakti-vedānta is so important that it seems that everybody knows what it means, at least in India. When they say bhakti, "Oh," they say, "Oh, that's different from Maharishi Yogi. That's different from anybody else. You have to start with bhakti." So the word is so nice also.

Tamāla Kṛṣṇa: And Prabhupāda is very famous also. So people think about Prabhupāda and Hare Kṛṣṇa movement when they hear it also.

Tamāla Kṛṣṇa: Your lectures in Delhi drew the most intelligent class of people, Śrīla Prabhupāda. The other svāmīs, when they would lecture, they would get just the typical pious Indian people, but yours also drew very intelligent group of people, sophisticated people. (break)

Prabhupāda: They danced. (laughter) With coat-pant, I have seen.

Prabhupāda: What is the time?

Kīrtanānanda: Is there a spoon here? Get the spoon.

Prabhupāda: I'll not sit up.

Prabhupāda: No. That much, warm glucose. That much, and nothing more possible. You don't increase. And decrease. Little in that ladle(?). That's all. And preserve those sweet lemon.

Tamāla Kṛṣṇa: Should we have some chanting now, Śrīla Prabhupāda?

Upendra: Śrīla Prabhupādajī? I would like to change your dhotī. It won't take but five minutes. I have everything.

Upendra: Yes, Prabhupāda. And by morning it will be too dry. It's not that much, so it's very easy. You're already on your side, so that's good. (break)

Bhavānanda: And you could take little bit spoon, half spoonful, every half an hour or twenty minutes, I think.