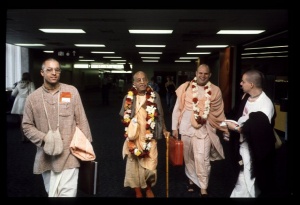 Prabhupāda: (Hindi about Jayānanda) . . . glorious death. (Hindi) What was his age?

Prabhupāda: (Hindi) I was very anxious to print my books. So he was the first one to come forward, a five hundred(?) dollar check. (Hindi conversation) What is this cloth is hanging?

Prabhupāda: Oh. Where is Gopāla?

Tamāla Kṛṣṇa: He went back to Bombay.

Tamāla Kṛṣṇa: He was in Delhi the day before yesterday.

Tamāla Kṛṣṇa: He was in Delhi only about two days ago. He'll be coming back here, he said, in about one week from now—one week to ten days.

Prabhupāda: (aside:) You can keep here. When Mr. Bose has come?

Akṣayānanda: He wants to stay.

Prabhupāda: He wants, but I don't think he wants. (laughs) It is known to me.

Prabhupāda: You promised them? (laughter)

Prabhupāda: This time little advanced he has become there, Bose . . . Shaven-headed. (Hindi) His father was sannyāsī. He's the first sannyāsī of Gauḍīya Maṭha.

Akṣayānanda: Everything Prabhupāda does is . . . (indistinct)

Prabhupāda: He is ideal sannyāsī. I think he's younger than you.

Indian man (2): Yes. As I am engrossed in this way. It is only through his grace I got extricated. It was impossible. I have got all opportunity. Still, the world has attract me in such a way that several times I promised to him; I could not extricate myself. But this time, I really strict and I last only . . . That strictness I found because I know it now.

Indian man (2): Kavi. In the mission only he is to poet, no other sannyāsīs and nobody, even not Prabhupāda, any sannyāsī. But he realized it. How much love he saw, Prabhupāda. Yesterday I spoke, yesterday night. The greatest living export that has been brought down by God, it is what Bhaktivedanta Prabhupāda has . . . He's such a living export, Indian culture . . . (Hindi) . . . in the world.

He is the literary living translator and implemented and carried out by single person. And that single person is so much infested and imbued with such a divine power. None of us can do. It is impossible. Practically it is impossible. The Prabhupāda's unfulfillment mission has been fulfilled by this Vedānta Prabhupāda. Śrīmad-Bhāgavata, all quotes, quotations, praising this all types of the power, all propagating the hari-nāma. And it is all-powerful by him. So there is a medium of literature, medium of professor, medium of the cinema, but still, medium of the personality who in . . . (indistinct) . . . presented it himself. And you, all people, that attracted by his transcendental personality. What with these social religions; there are many authorities and leaders have gone there, and social-religious reformers who practice the yoga, jñāna, karma, etcetera, etcetera. But the one person imbued and empowered fully, transcendental form, by Lord Caitanya Mahāprabhu Himself, and by his guru, Prabhupāda. I realized it. It is not that . . . Nobody can empower. And as a result our this Vaiṣṇava culture installing the Supreme as Kṛṣṇa pronounced as the mantra to worship Him. (Hindi) The nāma . . . If he fulfills the propagation of this out of the nāma, and then more powerful . . . Means that he is the more loved. This kīrtana, and more, this saṅkīrtana. These three things themselves teach us, though in one word—kṛṣṇa-nāma-saṅkīrtana is one faith. But still it has the three aspects—Kṛṣṇa, then nāma, then kīrtana, then saṅkīrtana. So he has, in his life, he exhibited, he translated, and in the world he has given this Kṛṣṇa. He has given this Kṛṣṇa. He has given the nāma. He has given the kīrtana, the saṅkīrtana which we have seen this morning, the saṅkīrtana, bahubhir militvā. Wonderful. In the Caitanya-caritāmṛta . . .

Prabhupāda: So you have got assets. You have got parentage. Everything you have got. Now do something. You have come. It is a good association. Satāṁ prasaṅgān mama vīrya-saṁvidaḥ (SB 3.25.25). (break) But they have dedicated their life to Kṛṣṇa. That is their qualification. Bhajate mām ananya-bhāk sādhur eva sa man . . . (BG 9.30). So their association is sādhu-saṅga .

Tamāla Kṛṣṇa: Is there any good cow's milk available?

Viśvambhara: Oh, so much brāhmaṇa has brought so many cows.

Prabhupāda: He has now kept some.

Viśvambhara: Many cows we have got now. One Dhanañjaya bought, she is giving thirteen kilos, fourteen kilos.

Viśvambhara: Yes. I bought it from Govardhan, from Dhanañjaya. She is giving thirteen, fourteen kilos.

Viśvambhara: Transcendental standard, in each and every thing. (Hindi conversation)

Tamāla Kṛṣṇa: That judge is making?

Tamāla Kṛṣṇa: That has to be sent. We don't have it yet.

Prabhupāda: (Hindi conversation) (break) "It is folly to be wise where ignorance is bliss." So restaurant is going on in Jalni(?) building? No.

Akṣayānanda: Evening, up till ten o'clock.

Tamāla Kṛṣṇa: In the new building? In this building.

Tamāla Kṛṣṇa: It's in the guesthouse. There weren't many people there, though. Only about five people at lunch.

Prabhupāda: People are not coming.

Akṣayānanda: It's up and down, Prabhupāda. Sometimes it's full. One day it's full; one day it's nothing. It's not steady. This is the problem. We always invite them. We go to the people personally and invite them, and they come.

Tamāla Kṛṣṇa: I think the waiters could have been better. They're not very . . .

Akṣayānanda: I can snap them up.

Tamāla Kṛṣṇa: They should be a little more businesslike. (background discussion) (break)

Akṣayānanda: That would be nice.

Tamāla Kṛṣṇa: Maybe tomorrow, if this Jayaśacīnandana goes the first time, I can go with him. I know Gauracānda a little bit, so I can, you know, just, as your secretary, send your greetings to him. He'll appreciate that.

Tamāla Kṛṣṇa: I think what I'll do is I'll go at the time when I know they're supposed to be making that offering. That way, I'll see if it's being done. Little spy work. What time is that offering made? Noontime?

Prabhupāda: Then have them bring little prasādam from there.

Tamāla Kṛṣṇa: Okay. From the plate that's offered to you?