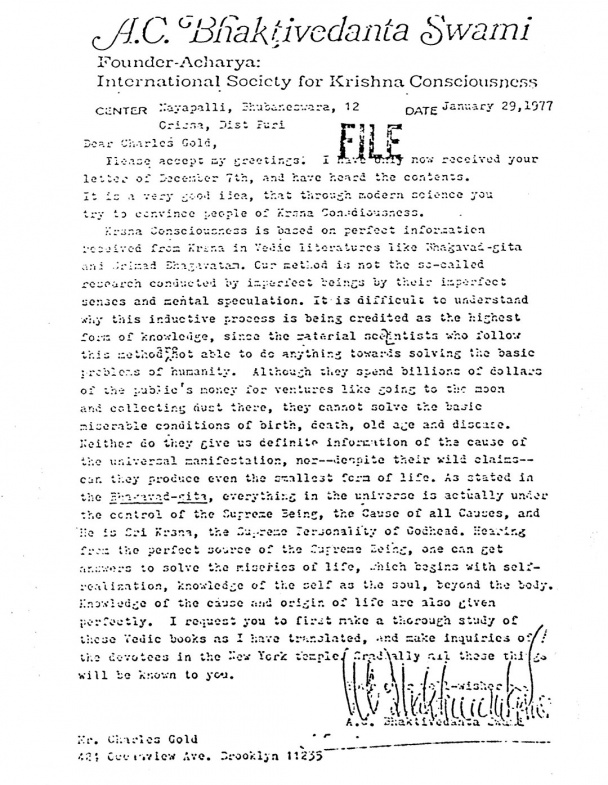 DATE January 29,1977
CENTER   Hayapalli, Bhubaneswara, 12
Orissa, Dist Puri
INDIA
Dear Charles Gold,
Please accept my greetings. I have only now received your letter of December 7th, and have heard the contents. It is a very good idea, that through modern science you try to convince people of Krsna Consciousness.
Krsna Consciousness is based on perfect information received from Krsna in Vedic literatures like Bhagavad-gita and Srimad-Bhagavatam. Our method is not the so-called research conducted by imperfect beings by their imperfect senses and mental speculation. It is difficult to understand why this inductive process is being credited as the highest form of knowledge, since the material scientists who follow this method are not able to do anything towards solving the basic problems of humanity. Although they spend billions of dollars of the public's money for ventures like going to the moon and collecting dust there, they cannot solve the basic miserable conditions of birth, death, old age and disease. Neither do they give us definite information of the cause of the universal manifestation, nor--despite their wild claims--can they produce even the smallest form of life. As stated in the Bhagavad-gita, everything in the universe is actually under the control of the Supreme Being, the Cause of all Causes, and He is Sri Krsna, the Supreme Personality of Godhead. Hearing from the perfect source of the Supreme Being, one can get answers to solve the miseries of life, which begins with self-realization, knowledge of the self as the soul, beyond the body. Knowledge of the cause and origin of life are also given perfectly. I request you to first make a thorough study of these Vedic books as I have translated, and make inquiries of the devotees in the New York temple. Gradually all these things will be known to you.
Your ever well-wisher,