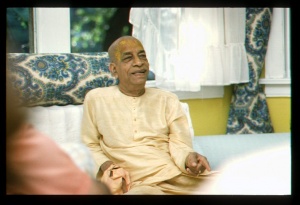 Prabhupāda: . . . and European temples, Deity worship, kīrtana. It will go on increasing, more and more centers. And make such a policy—pickpocket $250 and give them books. $250 for an American is nothing. Is it not?

Prabhupāda: Not at all! Any common man can pay $250—once. Not that we are getting every month or every few year. Once, 250 even ordinary worker can pay.

Hari-śauri: Yes. They do like that with those sets of books.

Satsvarūpa: They don't have to pay all at once.

Hari-śauri: Most things are done in America are on credit.

Satsvarūpa: "Book of the Month Club," they have. Very popular.

Prabhupāda: So you . . . we have to organize like that. And actually this is greater valuable for their life, changing life.

Prabhupāda: So now you all GBC make a plan how to introduce the books in every home. The same policy in other languages also. America is English language. Similarly, we can do here also in Hindi language, in Oriya language, or in Europe. So we have got much work ahead. Don't think our business is finished. No. Simply very intelligent we have to do it.

Hari-śauri: Practically speaking, we've hardly got any books translated into any other languages except for English.

Prabhupāda: No. We shall gradually do. When the English language there, from English you can do any language.

Prabhupāda: Yes. Sanskrit is very difficult. But when I have given in English language, you can convert into any other. English is known everywhere. This is international. So far I have seen—I've traveled all over the world—English language is understood. Sometimes they purposefully avoid. Otherwise, they understand. I have seen in Germany. They understand English, but they hate talking.

Satsvarūpa: In France, too. In France they don't speak English.

Satsvarūpa: They don't want to.

Prabhupāda: Yes. There is agitation in Canada.

Prabhupāda: Just like here it happened, Hindi and English. That enviousness is always there. I have seen in Montreal, all the officers, they are speaking in French. Don't talk in English. (chuckles) The airport. Purposefully. And there was fight, regular fight between these French-speaking and English-speaking. Riot. People are so foolish. So it is bilingual. In everything, English and French. If you put one notice, it must be in English and French, as here (chuckling), in the provincial 04:01 language, Oriya and Hindi, state language and English for outsiders—three languages. You'll see in the railway station the local language and the Hindi language and English. Actually people take advantage of the English language, a little more from the Hindi. Local language nobody knows. Just like we do not know what is Oriya.

Hari-śauri: (laughing) The people that speak the local language can't read it. So the signs are useless. Anybody who is educated enough to read it can read . . .

Prabhupāda: English language is understood. English . . . they speak in English. In big, big cities like Bombay, Calcutta, Delhi, even the girls, young girls, they would like to speak in English. They don't like to speak in their . . . at home even, with their father and mother, they're speaking in English. Especially in Bombay, everyone speaks. Not now. I have connection with Bombay since 1927. In 1927 I first went to Bombay. So how many years? Fifty years? I have seen it. They speak in English. They are sending their children where education is given by medium English. High-class men, they send their children to learn through medium of English. There is Calcutta, St. Xavier's College, near our temple.

Satsvarūpa: I think you wrote somewhere that Sanskrit should be the national . . .

Prabhupāda: That is very difficult. No, I . . . they wanted to make a national language. There was fight, great fight. Therefore I suggested, "Why not make Sanskrit language?" Everyone will adore.

Satsvarūpa: Because English is the language of the invaders; Sanskrit . . .

Prabhupāda: Yes. I have no objection, English. But if they wanted that national language, why not take Sanskrit? I am international. I don't believe in this national or statewise. I never believed. This is very good idea, īśāvāsyam idaṁ sarvam (ISO 1). God is the proprietor. He is the original father. Ahaṁ bīja-pradaḥ pitā (BG 14.4). Why do they not take this philosophy? They have attempted this United Nation organization. And where is this philosophy how to make one state? That is cheating them. Why not make one state?

Hari-śauri: They actually don't desire that.

Prabhupāda: Yes. It is actually a type of Chinese people. That, our Bali-mardana's wife, belongs to that stock. But in order to elevate her she represents that "I belong to the Japanese." (laughs) But I have studied. She belongs to that Hawaii. Maybe her father or somebody was respectable or rich man in that Hawaii, but she does not belong to Japan. She is that Hawaiian-Chinese stock. So the United States, they have included this, and going on nice. Their position is now secure. Nobody can invade. The Japanese tried to invade Pearl Harbor. Then finished. Atom bomb. The atom bomb was dropped on account of their attempt to invade this Pearl Harbor. In Honolulu there is Pearl Harbor.

Hari-śauri: Yeah. They would never entered the war unless . . . they weren't going to enter the war . . .

Prabhupāda: These poor Japanese, in two, three wars they attempted to expand. They are very poor in their land. Practically they have no place. Very poor. Only by some technical knowledge they are maintaining. Otherwise they have no food, no shelter. Very poor country. I have studied. The Dai Nippon directors, they are living in a thatched house. And their system is: big company, they supply everything—food, cloth, medicine, children's education, and little salary—so people do not leave the post.

Hari-śauri: Yes. Because their whole life is there.

Prabhupāda: They are not independent. Fully dependent on the employer. So they give poor salary. Dai Nippon has their own hospital, own education and everything—big industry. And little salary, that's all. So whatever house they allot, they have to accept. And I have seen the director living in a cottage like this almost. So Japanese, actually they are poor. Only the capitalists, they have got . . . therefore their yen value . . . you go to purchase—"Two thousand yen." You'll be surprised, "So much paying!" But it has no value. "One million yen." (laughs) In the beginning I . . . "What is this nonsense? So much?"

Hari-śauri: Our devotees, Gurukṛpā's party, they're talking about they collect a hundred thousand, eighty thousand, but it means . . . that means . . .

Prabhupāda: In taxi in the beginning, I saw, "Three hund . . . three thousand dollar." So (laughs) . . . and "Three thousand yen." So I did not know. I have got . . . they changed. Not dishonest. Honest or dishonest, I did not know. Whatever they took and returned, that's all. But I know they are not dishonest. They are nice people, hard worker, honest. But Japanese . . . this Tojo attempted that, "This is the time for our expand with German help." Bad luck. They could not do. They wanted to keep China under their control. That also failed. They fought with the Russians in the beginning, when we were children, to expand—failed. This time they wanted to occupy Hawaii.

Hari-śauri: They had many, many islands. They took a lot. But gradually the Americans won them all back.

Hari-śauri: They're very much wanted in other countries as well. They're technicians.

Prabhupāda: So if you can educate people, they will be united. This is actually United Nation movement. Actually see how these Europeans, Americans and Africans and others, without any artificial allurement, how we are keeping together. Nobody is dissatisfied with humble eating, humble living, humbly, plain living. So it is possible. There is possibility. We live simple life, high-thinking—United Nation. We can possibly. And there will be no scarcity. If we live simple life with Kṛṣṇa conscious thinking, there will be no scarcity.

Hari-śauri: Just like India has so many villages. Because they are living simply, then there's enough for everyone.

Prabhupāda: No scarcity. Population increasing? You increase your food. So much land everywhere vacant, all over the world. But that they will not do. They will keep the cattles and eat. Cattle also, they want vegetable. Otherwise how you'll get cattle? But therefore in the Bhagavad-gītā, annād bhavanti bhūtāni (BG 3.14). Produce food grains. Just like this is. How nice it is, from paddy. So you take the paddies, rice, eat, and the grass you can utilize in so many ways. Anywhere you can till the ground, you get paddy and the grass. Make your cottage. So shelter is there. And the animals also like this grass. You can make home. Where is the scarcity? Plain living, high thinking, and prepare for next life. Go back home, back to Godhead. Finish this hellish life of repeated birth and death. There is no knowledge. And when we try to give them this knowledge, they say: "You are brainwashed. You have imported some new way of life, style of life. Brainwash." (pause) So our European, American devotees, they like rice? No.

Prabhupāda: Japan also, same thing like Bengal and Orissa. They take rice and fish. That is their staple.

Hari-śauri: In the West they regard rice as the poor man's food.

Prabhupāda: But Japanese are very intelligent, Bengalis are intelligent, by taking fish and rice. In Bengal ninety percent people, they take fish. Here also, Orissa, cent percent, even the Jagannātha pūjārīs. In Bihar also, fifty percent. The more you go towards western part of India, you get more wealthy province, just like Uttar Pradesh—very wealthy province, enlightened. All the big cities are there: Allahabad, Kanpur, Agra, Lucknow. Every hundred miles you get a very nice city in UP, the best province in India. All the holy places—Vṛndāvana, Prayāga, Hardwar, Ayodhyā, many celebrated holy places. Ganges and Yamunā flowing, two sacred rivers, both of them through in Uttar Pradesh. And all the cities are either on the bank of the Yamunā or Ganges. And that is the best province, state, in India. It has got fifty districts. And fifty districts means fifty towns, little more or less important. But the Kanpur is the third important city in India. First Calcutta, Bombay, and next, Kanpur.

Prabhupāda: No. Delhi has become important account of capital.

Prabhupāda: From business point . . . now they're making Delhi industrially developed. That is new attempt. But Calcutta, Bombay, Kanpur is old . . . Calcutta is manufactured by the British. Bombay also manufactured. But Kanpur is older, very old. Kanyakubja. That Ajāmila upākhyāna? Ajāmila?