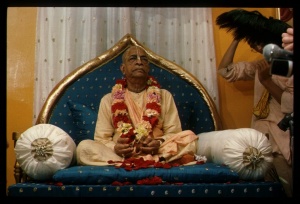 Rāmeśvara: This is a very bad picture. It makes the devotee look very strange. And they have this elaborate ghee holder.

Prabhupāda: This is our men?

Rāmeśvara: Yes. This is at an ārati. You can see the donations that people have put on the tray. But it makes it look very strange, this picture, with the lighting. They have deliberately selected this.

Rāmeśvara: Yes. Yes. I have just been reading it.

Hari-śauri: What newspaper is that?

Prabhupāda: Bad propaganda is going on.

Gargamuni: Some good, some bad.

Prabhupāda: Yes. There are two. Any movement will have such.

Gargamuni: I have mentioned this morning about Sumati Sarvadetra(?), Mr. Moksa Buddhi(?), that he was considering becoming a devotee. So I told him you were here, so he immediately came tonight. He's waiting now.

Prabhupāda: Oh. So then bring him. That's all right.

Rāmeśvara: So I can read this and summarize it . . .

Rāmeśvara: . . . if there is anything interesting. But this is something that's nice. (break) . . . this one first. This is the total sales.

Prabhupāda: This is the largest sale. (chuckling)

Gargamuni: It's only English.

Rāmeśvara: This is just English.

Indian guest: Sure, sure.

Rāmeśvara: Now the next two reports. First of all, for the month of December there's the ratings for the whole Society. So in the top ten, number one was New York, Rādhā-Dāmodara, with $170,000.

Prabhupāda: (Bengali with guest)Give him some book to read.

Indian guest: I should have some basic knowledge about.

Rāmeśvara: Number two was Los Angeles, with $87,000. Number three was Berkeley with $85,000. Number four was San Diego, $62,000; Caracas, 60,000; Brazil and England tied—$48,000; Germany 33,000; Denver 32,000; and Pittsburgh 30,000. And the medium temples weren't so outstanding, but the small temple, Houston, little Houston, $25,000. They only have about twelve men. I cannot understand how hard they worked to do this; very hard. Plus it shows Gurukṛpa's donation, ISKCON food relief donation. Then the outstanding zones for the month. Number one is Tamāla Kṛṣṇa, with $200,000. Number two was my zone. Actually it's your zone, but you've made me manage it a little. $182,000. Very close to beating him. (Prabhupāda chuckles) Actually, I have noticed that if the West Coast was not divided this year into two zones . . . Formerly it was just one zone. All Berkeley . . . it was one zone. Now it is two zones. So I noticed that if it had not been divided, then every month the West Coast would have been number one. (laughs)

Rāmeśvara: Yes. Then Hṛdayānanda was number three, with $155,000. That is very good for Latin America.

Rāmeśvara: And number four was the northwest West Coast—that's the other half of the West Coast—with $122,000. Then fifth was Jayatīrtha, $89,000, which is very good for three temples.

Rāmeśvara: My zone is all gṛhasthas, (laughs) with a few brahmacārīs. Anyway, next year we can beat Tamāla Kṛṣṇa. (Prabhupāda chuckles) He has only beaten us by a few hundred thousand dollars.

Rāmeśvara: Or it may be ruined.

Prabhupāda: He may be very careful.

Rāmeśvara: I think we should send him a congratulations letter.

Prabhupāda: (laughing) Yes. To entice him.

Prabhupāda: No, no. I purchased some hand press?

Prabhupāda: So that, it has got special name. I forget now. I purchased two presses, $150.

Prabhupāda: Mimeograph. Ha, ha, ha. So we were selling about five hundred copies, and gradually . . . But still, Tamāla Kṛṣṇa was selling almost major portion. Then I asked Brahmānanda that "Why not print?" So he took quotation from different printers, and Dai Nippon, we gave them, printing, this Teachings of Lord Caitanya. So he took quotation, ten cent per copy. But they want twenty thousand. So we were selling about one thousand, and it is a question of twenty thousand. So I consulted Tamāla in San Francisco. So he gave me some encourage. I asked Brahmānanda, "Yes, print twenty thousand." So (chuckles) from five hundred to twenty thousand—great jump. Somehow or other, it began like that. Now what we are printing per month?

Prabhupāda: No, no, this Back to Godhead.

Prabhupāda: So the first attempt was only 20,000. I calculated. Anyway, Kṛṣṇa is giving us all facility. Let us utilize it to the best of our capacity. We have no other ambition. We want to see that everyone may accept the Supreme Personality of Godhead and be happy. This is our mission. We have no other ambition, not to make any cost-profit. But when we see that so many people are reading Kṛṣṇa book, that gives us very good encouragement. Otherwise what . . .? Two cāpāṭis we can get anywhere.

Rāmeśvara: We wrote in the newsletter to the Society that even though our movement is being attacked in so many ways, the best counterattack is through book distribution.

Prabhupāda: Yes. That is the best answer to this opposition. And when the case is there, put all the books before the judge: "Now you read and give your judgment. Don't . . . You are learned lordship. Please read these books and give your judgment. We have got already judgment from the scholars." Present like that. "But still, because in your court it is presented, so we pray that you give your judgment after understanding our method of brainwash." That will make him flat.

Rāmeśvara: We gave this proof, another proof that our movement is transcendental to all material obstacles and impediments, that this year there was, in America, spiraling inflation and unemployment, and the cost of living was therefore rising like anything, but our books, in defiance of all these material trends, were being printed in larger quantities, but the temples were paying less for the books than ever before. And even though all the major airports were closed for a minimum six months or more, the hardbound book distribution—we just looked at the numbers—actually increased by one hundred percent.

Prabhupāda: So it is Kṛṣṇa's mercy. "You can do all kinds of opposition, but we shall go forward. The caravan will pass. You may bark." So take all these things as Kṛṣṇa's mercies and engage more enthusiastically. Why should we be defeated? Yuddhyasva mām anusmara (BG 8.7). Just remember Kṛṣṇa and fight. Bās. Fighting is . . . This material world is fighting. Manaḥ ṣaṣṭhānīndriyāṇi prakṛti-sthāni karṣati (BG 15.7). The karṣati is struggle, but struggle for Kṛṣṇa. That is perfection. That's all.

Prabhupāda: Thank you. Work very hard for Kṛṣṇa, one life.

Rāmeśvara: You may like to see these, so I can leave them here?

Rāmeśvara: When these come out, I frame them on my wall.

Prabhupāda: Our method is iti śuśruma: "I have heard it." That's all. (end)