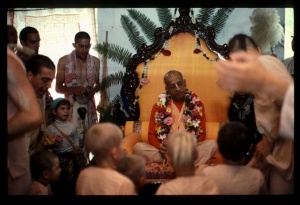 Prabhupāda: In Durban. South Africa. Fighting with General Smuts to give Indians equal rights. They are very conservative. At heart they want "Indians may go away." They don't want Indians. And if they want, it is for their own benefit. The Indians are given some place to develop as marketplace, and as soon as they develop, they ask, "Go there. Leave this place. Go away, other place." This is going on. And they know very well, politicians. The Indians have been given a place where nearby there is a slaughterhouse. They know Indians are sentimental, at least for cow slaughtering. Whole night slaughtering is going on, and there are screaming of the animals. Whole night. Even those who are meat-eaters, they will be disturbed. So the purpose is that, "Let them live near the slaughterhouse, so by sentiment they are disgusted, leave this country." They don't want the Asians, especially Indians, and especially due to Gandhi, because they know, due to Gandhi . . . at least Gandhi organized the public opinion against the Britishers by this non-cooperation movement. They were not affected by the . . . affected in this way, that public opinion was against them. That is also organization. Otherwise Gandhi's method was not harmful to them, this noncooperation, nonviolent. That did not help. But he influenced the public opinion against them.

Rāmeśvara: All over the world.

Prabhupāda: Yes. That Hitler also did. Panch lage to bhut bhage: "If five men combine together, even the ghost will go away." (laughs) So everyone was against the Britishers, how they can keep their . . .? And nature's law also. They exploited the whole world for the benefit of few persons in London, and that is very bad.

Gurudāsa: You told me they wanted to be paid in gold by the Home Bill, just to deplete the economy.

Prabhupāda: Yes. Yes. Home Bill. Because I was student of economics. So Home Bill, Home Bill means all the Englishmen were engaged in India, either government, railway, industry, factory, and so on, so on, so on. Whatever . . . they have got some charges. So all the bills were sent to London, and they made a Home Bill. Their home is in England, so they won't take payment here, they'll take payment at home. And the government there, they'll present the whole bill to India and debit India's account in gold. That means, other words, all the payments which were to be made to the Englishmen in India, they were paid at home in gold.

Gurudāsa: So that means they would spend at home instead of India, for the benefit of themselves.

Prabhupāda: Yes. No Englishmens were allowed to domicile in India. No. Strictly. But if . . . as soon as they make home, it will be America. The Americans made their home in America, so a war of independence was . . . they have experienced that, so did not allow the Englishmen to make India home. "You come here, work and take your payment. Can't come down." This was the policy, Home Bill. And India's gold was kept in London. So gradually all the gold finished. Very, very crooked policy they followed. They . . . they . . . in Muhammadan period there was no such peaceful exploitation. These Muhammadans, they wanted to become lamma, kukum. Bās. That's all. They were satisfied. But their princely expenditure was done in India. When Shah Jahan constructed the Taj Mahal, heavy expenditure, but the payment was received by the Indians. And here a railway . . . very smart railway bridge is constructed, that . . . the payment was paid in England. This was the policy. Every even screw, iron screw, was imported from England.

Gurudāsa: Yes. India was dependent on tea and cloth from England.

Prabhupāda: But tea, they also produce it.

Gurudāsa: Was it introduced by the English?

Prabhupāda: Yes. India did not know what is tea. They started the tea gardens, and they recruited laborers from India. We have seen in our childhood that Mahatma Gandhi Road. When I was standing on the gate, five hundred, six hundred laborers recruited from Bihar. Bihar and Orissa, these two provinces are very poor. Even all these colonies, just like Trinidad . . . where is Englishmen? If the laborers and Indians were sent . . . therefore we find in Mauritius, in Africa, so many Indians. Their kingdom, first of all it was conquered by Indian soldiers. Then, when it was to be organized—Indian coolies, Indian laborers, Indian guards. They have got men and money, but they expanded empire. So I am doing the same business: American money, American . . . (laughs) I am also a great politician.

Prabhupāda: Yes. But I am not for home. I am for the whole world. It is not . . . I have no such idea (laughs) that "I shall exploit American men and money for India." That is not my ambition. For the benefit of the whole world.

Gurudāsa: You are doing "Back to Home" bill.

Prabhupāda: Yes. Jaya. But actually I am exploiting American men and money, from this point of view. But what can I do? I do not make any national distinction, either American or Indian.

Gurudāsa: You are not exploiting . . .

Gurudāsa: They were exploiting; you are uplifting.

Prabhupāda: Yes. (loud sounds of train horn) This is train?

Prabhupāda: No, practically I am spending America's money in a proper way. They would have used it in a different way.

Gurudāsa: No distinction. Any money will do. So our movement is . . . (break)

Prabhupāda: There is no exploitation. America has enough money, and India has got enough culture. So they should combine for the benefit of the whole world.

Prabhupāda: That is always. Now they've got enough money, but how they will utilize? That is the only source, outlet.

Rāmeśvara: So as the Kṛṣṇa consciousness movement increases its influence, then American culture will gradually change?

Prabhupāda: Oh, yes. As you have changed. You are American. Why not others?

Rāmeśvara: So the nightclubs and the cinema, this will be gradually . . .

Prabhupāda: They simply produce anxiety. When they will come to understand that they will get better engagement, automatically these nonsense things will be stopped.

Prabhupāda: They can be utilized.

Gurudāsa: Yes, they can be utilized.

Prabhupāda: In a different way.

Rāmeśvara: Formerly civilization did not have so many technological devices.

Prabhupāda: No. Why monarchy? You can continue democracy, but the legislators should be first-class men who has knowledge, not these rascals.

Rāmeśvara: But the real problem is the businessmen, because they can influence the mass of people by advertising.

Prabhupāda: The mass of people should be educated. Just like we are educating, "No meat-eating." So automatically the meat-selling, slaughterhouse will be stopped.

Rāmeśvara: There must be some controls. Otherwise . . .

Prabhupāda: Yes. Control must be there, that . . . this is very easy. The state cannot support or maintain slaughterhouse. If you want to eat meat, you kill animal at your home. But state cannot. So mass sinful activities, state cannot. So if the legislators and the head of the state are Kṛṣṇa conscious, they will understand the importance of this. So they can stop slaughterhouse. And the public agitation? "You can slaughter animal at your home. You have got the liberty, but state cannot maintain." What is the wrong there?

Rāmeśvara: What about buying books? There are so many books with nonsense ideas. That will have to be controlled also.

Prabhupāda: Yes. If the government is Kṛṣṇa conscious, they can control everything.

Rāmeśvara: That means the government will have direct controls over all different fields of business.

Rāmeśvara: But in America the government cannot tell the publishing house, "You can only have Kṛṣṇa conscious books." They are tolerating books about sex, books about crime . . .

Prabhupāda: No, if you educate public that these are nasty things, in the school, colleges, where government has control, then automatically sale will be stopped.

Prabhupāda: If you educate people, "Don't waste your time," then they will stop. They are controlling in Russia, publication.

Rāmeśvara: But that's why I said . . . that is not possible, it seems, in a democracy. They have to have dictatorship.

Prabhupāda: No, democracy means people elected. If public wants that the election should be amongst the Kṛṣṇa conscious person, then it will be done. One man's ruling will not be possible unless there is dictatorship.

Prabhupāda: Yes. (train horn sounds) So this is the train.

Rāmeśvara: Yes. Still, in some people there will always be some greed how to make money by sinful means.

Prabhupāda: No, everyone is greedy. Therefore education required, spiritual. They should be greedy for Kṛṣṇa. That is Kṛṣṇa consciousness. Paraṁ dṛṣṭvā nivartate (BG 2.59). When they will see this is better position, so their greediness will be for Kṛṣṇa, and other thing will be left away.

Rāmeśvara: And the state will not tolerate . . .

Prabhupāda: Four classes of sinful activities should be stopped by the state.

Rāmeśvara: That must be stopped.

Rāmeśvara: But you said they can do it at their own home.

Prabhupāda: Liberty. "If you like, you can do at your home."

Rāmeśvara: They can make their own alcohol.

Prabhupāda: What is Thela?

Gurudāsa: He said that we should drive a little forward. (break) (sounds of train starting)

Hari-śauri: (devotees attempting to get luggage on train before it starts) Those two go with the women, actually. Leave them down . . .

Abhirāma: Where should I leave them?

Abhirāma: Who is this for? Prabhupāda's? (doors opening and closing)

Gurudāsa: No, they won't leave.

Abhirāma: Please, nobody come in the hallway unless necessary, because we've got to get everything in. (background noise and discussion as devotees load luggage)

Hari-śauri: This is a table. This is not coming in here.

Rāmeśvara: Not in this room. That is to be stored.

Arundhatī: Our stuff has been put somewhere else. (more background discussion about paraphernalia being loaded)

Devotee: Would everyone get out of the room? (voices and shuffling)

Hari-śauri: Is that your typewriter?

Rāmeśvara: Yes, you'd better get off.

Rāmeśvara: Gurudāsa, you better just jump right off. It's going to start any second.

Gurudāsa: I think we're stopping the train. We stopped the train.

Hari-śauri: We didn't even move, did we?

Hari-śauri: We started to move.

Gurudāsa: All the devotees pulled these things.

Rāmeśvara: These buckets don't need to be in here.