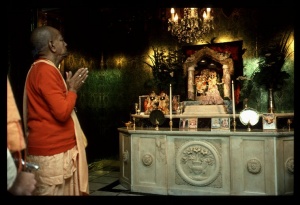 Guest (Indian man): Could it be that there may be different interpretations?

Prabhupāda: No, that is not possible. That is not the process. You cannot interpret Bhagavad-gītā. If you want to preach Bhagavad-gītā, you must preach what Kṛṣṇa has said. If you have got a different philosophy, you can say differently. You don't cheat people that you take Bhagavad-gītā and interpret in your own way and cheat others and be cheated yourself. You cannot do that.

Prabhupāda: Tilak may be, Gandhi may be, whoever may be. But the point is that you have to understand Bhagavad-gītā according to the direction of the author. Because you are Mr. Tilak or Mr. Gandhi, you can do everything on Bhagavad-gītā . . .

Guest: No, no, that is not the idea. But there are different type ślokas.

Guest: Yes, but who is decided what exactly the meaning . . .

Prabhupāda: Exactly the meaning is there.

Prabhupāda: Literally, yes. The thing is, the interpretation is required when you cannot understand. If . . . if I say, "This is a stick," everyone knows it is a stick. So I say, "Here is a stick." So if you say, "No, I do not accept it is stick," so what is that interpretation? Everyone knows it is stick. Similarly, Kurukṣetra means that the place, still existing. And in the Vedic śāstra it is ordered, kurukṣetre dharma yajayet. You go . . . From time immemorial it is a place of pilgrimage. Even Kṛṣṇa, during solar eclipse, Kṛṣṇa with His family, He came there, Jagannātha. The ceremony is there, Ratha-yātrā. Because Kṛṣṇa, Balarāma and Subhadra came in the same chariot, that is being performed. So Kurukṣetra, dharmakṣetra, at least five thousand years ago the system was that people used to come to Kurukṣetra as a place of pilgrimage, dharmakṣetra. And Kurukṣetra, the place is there. And the two family members, the Kurus and the Pāṇḍavas, they fought. The Battle of Kurukṣetra took place. These things are evident. Then why there is need of interpreting? That is the first point.

Guest: Those points are very clear.

Prabhupāda: No, I mean to say, instead of collecting so many hundreds and thousands of literature on the Bhagavad-gītā, why not take Bhagavad-gītā as it is? What is the difficulty? Kurukṣetra is this position is fact. Mahābhārata, Mahābhārata means greater India. And that is, it is itihasa. It is called itihāsa. Itihāsa, if you don't believe that there was a battle in the Kurukṣetra . . . But that is the fact. It is the history. Then how you can finish(?) Bhagavad-Gītā? Every point of Bhagavad-gītā, it is clear. It is clear. There is no need of interpretation. That is the first thing. If you interpret you spoil the whole thing. Because interpretation is required when the things are not clear. If everything is clear, why should you interpret?

Guest: No, it is explanation I think.

We are presenting, "Here is God." You are searching after God, Kṛṣṇa, and they are accepting. They do not . . . (indistinct) . . . what is Kṛṣṇa. What is this? How they are accepting? Because it is the real thing, there is no interpretation. They are not Hindus, they are not born in India. How they have come to Kṛṣṇa consciousness? They have given up bad habits, no illicit sex. Because you cannot understand Kṛṣṇa unless you are free from all sinful activities. Anyone who is sinful, he cannot understand Kṛṣṇa. Na māṁ duṣkṛtino mūḍhāḥ prapadyante narādhamāḥ (BG 7.15). We test him. We test like this, that Kṛṣṇa says this, that anyone who does not surrender to Kṛṣṇa as the Supreme Lord, he is under the four groups: duṣkṛtina, mūḍhāḥ, narādhamāḥ, māyayāpahṛta-jñānā. That's it. We are fools and rascals, we have no such education. But we take Kṛṣṇa's word that "Here is a fool, here is a sinful man, here is a narādhamāḥ, here is māyayāpahṛta." So unless you stick to this point, that we shall preach Bhagavad-gītā . . . (indistinct) . . . then there is no meaning of it. You are misled, you will mislead others. But if you take Bhagavad-gītā as it is, as Kṛṣṇa said, then . . . If you are not prepared to do that, then however . . . (indistinct) . . . interpretation, thousands of literatures, the result is . . . (indistinct) . . . This is practical.

Prabhupāda: If there is no reason, then why there are so many interpretations of Bhagavad-gītā?

Prabhupāda: So why you shall go to so many leaders? Why not go to the supreme leader, Kṛṣṇa?

Prabhupāda: If you explain, that is another . . . But interpretation.

Prabhupāda: That is already there. What Kṛṣṇa says, you say.

Guest: No, that is all right. Not to go further. As an organization we want to know your views on those points.

Prabhupāda: Now what is the first point?

Jagadīśa: "To collect all available materials and survey all institutions in India and abroad who are doing work based on Bhagavad-gītā so that we will have completely up-to-date library."

Prabhupāda: So I say what is the need of collecting? What Bhagavad-gītās you have got?

Guest: Now, for example, we should have literature on Gītā.

Devotee: If I want to go to Bombay, I must have the correct timetable, not a false timetable.

Prabhupāda: Therefore I say, what Kṛṣṇa directs, evaṁ paramparā prāptam imaṁ rājarṣayo viduḥ (BG 4.2). Paramparā means to hear the truth from the spiritual master. You take this. Kṛṣṇa . . . Arjuna accepted, when he was puzzled whether to fight or not to fight, he accepted Kṛṣṇa as guru. Śiṣyas te 'ham: "Now I don't want to talk or argue with You," because as soon as you become a śiṣya you have to accept the statement of the guru. That is the relationship between guru and śiṣya. You cannot talk with guru from the same level. Whatever guru says, you have to accept. Otherwise don't accept guru. Don't make a fashion of taking guru just like you keep a dog. Guru, first of all you have to select. Tad viddhi praṇipātena paripraśnena sevayā (BG 4.34).

You have to select such a person where you can fully surrender. So Kṛṣṇa is accepted by Arjuna like that. Śiṣyas te 'haṁ śādhi māṁ prapannam (BG 2.7). First of all, "I have surrendered to You." This is the first instance (instruction?). That means whatever He says, and at last He says, sarvam etad ṛtaṁ manye yad vadasi (BG 10.14). This is . . . Not that you make cut-cut(?). That is the process. Here is the paramparā. Kṛṣṇa is speaking Arjuna, and Arjuna is accepting, sarvam etad ṛtaṁ manye yad vadasi. This is . . . Not that you make cut-cut(?). "Whatever You have said." Paraṁ brahma paraṁ dhāma pavitraṁ paramaṁ bhavān (BG 10.12). "You have said that You are the Supreme, paraṁ brahma. I accept it." This is paramparā.

So we have not seen Kṛṣṇa talking, but the words are there. So Arjuna has accepted Kṛṣṇa as the paraṁ brahma. How we have change of, "Kṛṣṇa is . . ."? So first of all we have to accept by the paramparā system. Sa kāleneha yogo naṣṭaḥ parantapa. "That paramparā is now gone," Kṛṣṇa says. "Therefore I am speaking to you again age-old system." Not that new. Purāṇa. And now you take. How Arjuna is accepting? Arjuna said, sarvam etad ṛtaṁ manye (BG 10.14). (Hindi) That is not Bhagavad-gītā understanding. You take paramparā system, you try to understand Kṛṣṇa as Arjuna has understood. That is bhakti. Otherwise it is . . . (indistinct) . . . There is no meaning. But if anyone has accepted the paramparā system as Arjuna has understood, then he can speak on Bhagavad-gītā. Otherwise he has no right to speak anything. That is paramparā.

Prabhupāda: But All-India Conference, it is not for mass understanding. Kṛṣṇa said yad yad ācarati śreṣṭhaḥ. Śreṣṭhaḥ means the leaders of society, rājarṣayo. Not ordinary persons. Rāja, he must be just like Mahārāja Yudhiṣṭhira, Mahārāja Parīkṣit, Lord Rāmacandra, Mahārāja Ambarīṣa. They are rājarṣi. They are saintly persons, but they are governor. Such persons should understand. Yad yad ācarati śreṣṭhaḥ tad tad evetaro janaḥ (BG 3.21). If the śreṣṭha person understands Bhagavad-gītā, it is not for the mass of people. Because,

You cannot make a mass meeting and pass resolution and you'll understand Kṛṣṇa. It is not like that. Workers must be also very śreṣṭhas, not ordinary workers. He must understand Kṛṣṇa. Then he can . . . It is not foolish, what kind of . . . (indistinct) . . . So if you want to prove Bhagavad-gītā, find out the śreṣṭhas of the country, sit down. Not that at mass conference—you bring meeting(?). And preaching. Select! If you understand, then you can preach. But if you do not understand what is Bhagavad-gītā, how to understand Bhagavad-gītā, what is Kṛṣṇa . . . And Kṛṣṇa says that,

So to understand Kṛṣṇa is not so easy job. First of all one has to become siddha. And not only you become siddha, yatatām api siddhānām (BG 7.3), even one is siddha it is very difficult for him to understand tattvataḥ. What Kṛṣṇa means, to understand, it is not so easy job. And again He said, He explains that bhaktyā mām abhijānāti yāvān yaś cāsmi tattvataḥ (BG 18.55). Only the devotees can understand. It is not the business of the karmīs, jñānīs, yogīs. He has strictly specified, bhaktyā. Bhakto 'si priyo 'si. When He wanted to instruct Arjuna . . . Arjuna was a householder, a kṣatriya, not even a brāhmaṇa, not a Vedāntist. The question may be why He selected Arjuna to preach Bhagavad-gītā, which is so . . . (indistinct) . . . and . . . (indistinct) . . . That Kṛṣṇa says: bhakto 'si. "Without being bhakta nobody can understand Me." And again He confirms, bhaktyā mām abhijānāti yāvān yaś cāsmi tattvataḥ (BG 18.55). If we interpret Bhagavad-gītā in a different way, karma, jñāna, yoga, you'll never get Kṛṣṇa.

So these things are there. So to understand Bhagavad-gītā one has to become a devotee, pure devotee. Not because he's learned scholar, he's a big politician or a big yogī or big jñānī. Because He plainly says, bhaktyā mām abhijānāti yāvān yaś cāsmi tattvataḥ (BG 18.55). If you do not understand Kṛṣṇa tattvataḥ, what He is, then it is natural he'll interpret in his way, his own philosophy. That is not . . . (indistinct) . . . If you take jñāna, yoga, karma, or other . . . But it is not possible. You have to receive it through the paramparā system. The paramparā system is clear. As Arjuna understood, you have to take it. And if you preach, that will be effective. I . . .

Prabhupāda: If you say my idea, then I become one of you. (laughter) So I don't want that. I say I am foolish man. I have no idea. Whatever Kṛṣṇa says, that is idea. Just like a child, he speaks the words of the father. If the father . . . The child asks, "Father, what is this?" The father says, "This is a stick." So if the child says, "That is a stick," so that is correct. He may be a child; because he repeats the words of the father . . . (Hindi) If the people are fools and rascals, then other will be fool and rascal. Śva-viḍ-varāhoṣṭra kharaiḥ saṁstutaḥ puruṣaḥ paśuḥ (SB 2.3.19). (Hindi) If you accept Kṛṣṇa as the Supreme, then where is the question of interpretation? (Hindi conversation) But who accepted? This is a fact. You try to understand that before me for two hundred years so many svāmīs, yogīs were there—not a single man became Kṛṣṇa conscious. (Hindi conversation) He is not teacher, he is cheater. Why should you change Kṛṣṇa's words? That is Caitanya Mahāprabhu: yāre dekha, tāre kaha 'kṛṣṇa'-upadeśa (CC Madhya 7.128). Don't manufacture. What Kṛṣṇa has said, you say. Just as a child he can say, "This is a stick." "How you have learned?" "Father said." That's all. (Hindi) I started this business with forty rupees. (laughter) (Hindi) Yes. When I went to New York they allowed me only forty rupees. (Hindi) (end).