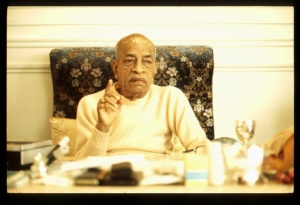 Prabhupāda: . . . education, devotion, activities. Who can take more care than the father and the mother? So you combine together, make a batch of good character, ideal character in the whole world. There is no ideal character. Everyone is drunkard and meat-eater or woman-hunter. What is the civilization? Hog civilization. (break) . . . civilization. Work hard, get some money, and spend it for intoxication, illicit sex. This is civilization. Is it not? They have no idea how to make civilized.

Mahāvīra: I was hearing that before I left England there was some trouble in Scotland over the rules about the bars and drinking. And now they want to make a rule, a law, that the children can be allowed into the bars under their parents' . . . they make it a big social . . .

Prabhupāda: They allow the children sit down. They take soda water, and the father, mother drinking. I have seen it. They are learning from the father and mother from the begin . . .

Hari-śauri: My father used to . . . every Sunday they used to go to the pub, and then for Sunday afternoon, as a special treat, they would all get . . . we'd be given a glass of beer.

Prabhupāda: Just see. Father, mother take . . . because they think it is civilization. Elderly boys, the father, mother tell, "What is the wrong, illicit sex? Take woman, take car. Enjoy life." I have seen it. They know, "This is life. Why . . .?" Therefore they say: "Brainwash. This Swāmījī is controlling their minds and brainwash." That is their charge.

Prabhupāda: Wash, ne. The brain should be operated, surgical, to take out all the rubbish things from the . . . it is called membrane?

Mahāvīra: Always keep it simple: purīs, one, and one other thing?

Prabhupāda: No, one kind. Either purī or puṣpānna or khicuṛi, like that. You cannot make.

Mahāvīra: Tonight I made sabjī and purī.

Prabhupāda: Yes. That is easiest, purī and sabjī Similarly, khicuṛi and sabjī, puṣpānna and chutney, like that. Temple means feeding them with prasādam. In Bombay the Sunday Feast going on?

Saurabha: We don't have so much facility to feed them, because there's only the temple floor, so there's always a big crowd and we have to do two shifts. So sometimes . . .

Prabhupāda: When it will be complete, more facility.

Prabhupāda: Take prasādam, see drama, read books, chant Hare Kṛṣṇa. Bās. And if you like, you can live with us. So where is the difficulty? Ānandamayo 'bhyāsāt (Vedānta-sūtra 1.1.12). Ānanda-cinmaya-rasa-pratibhāvitābhis tābhir ya eva nija-rūpatayā (BS 5.37).

Prabhupāda: That American politician has predicted that "This Hare Kṛṣṇa movement, within ten years, they will capture our government." (laughs) So do it actually. (laughter) Then it will be very nice. It is not . . . simply take the people in your favor—the government is yours. That they are afraid of. The young boys, they are taking Hare Kṛṣṇa movement seriously, so the government can be changed in their favor. After all, it is democracy, you can do it. You become president; you'll become senator. In America it is possible. And if America accepts . . . what about this new president? Or . . . formerly I heard about him that he is religious man.

Saurabha: His mother is . . . she was working in India.

Saurabha: So she's very favorable towards India. She was some type of social worker in India.

Prabhupāda: His mother? Oh. Then at least he has got some good thinking.

Saurabha: They said . . . there's a movie star in Bombay, and he is . . . he's a friend of this Carter. So Jagat-puruṣa is going to approach him. He's a very good friend of . . . because his mother, she was working in India and she knew this family. So they have a lot of friends in India.

Pradyumna: Did Balavanta meet him?

Jagadīśa: I think so. Balavanta's . . . there was one man, a black man who was running for mayor at the same time that Balavanta was, for Atlanta. And that black man dropped out of the race and supported Balavanta.

Jagadīśa: Yes. Then later on, that man, he was appointed Lieutenant Governor under Carter. So Carter and this man are close, and through this man, Carter knows about Balavanta and the movement.

Prabhupāda: You have written one letter?

Prabhupāda: Balavanta is very intelligent boy. He can do that.

Prabhupāda: Bring that spring water, little. You can type this?

Jagadīśa: Śrīla Prabhupāda, one of the students is just about fifteen, and he's been initiated now for a year, and I'd like to recommend him for second initiation. (break)

Prabhupāda: . . . good hope for preaching in China. I have received letter from Trivikrama Mahārāja. What she is doing, Carter's mother, here? He's in India?

Jagadīśa: She must have been a missionary.

Hari-śauri: Part of the Peace Corps or something?

Jagadīśa: Oh, that's it. She worked with the Peace Corps.

Jagadīśa: That's an American organization. It sends out people all over the world to help the . . .

Mahāvīra: Like when they have earthquakes and hurricanes in countries, the Peace Corps will go there, and they will do all the nursing and doctoring and helping people get homes . . .

Prabhupāda: So unless there is earthquake, they will not work.

Jagadīśa: No, that's not the Peace Corps.

Hari-śauri: He knows about that?

Pradyumna: Yes, he knows all about agriculture.

Hari-śauri: Why don't we send him to Hyderabad?

Pradyumna: He worked there for about . . .

Prabhupāda: Let him go to Hyderabad.

Pradyumna: He knows all about agriculture.

Hari-śauri: And he speaks the language, too.

Saurabha: It has lost its popularity now.

Saurabha: It is not very popular now.

Saurabha: In fact, in India they have ordered to leave, practically.

Saurabha: They say they had some connection with the CIA.

Prabhupāda: That is politics.

Prabhupāda: He was a politician. That you cannot blame. Politics require all these things. A politician cannot be a saintly person. That is not possible. For politics he has to do so many things. That is necessary. Just like Arjuna wanted to be a nonviolent. Immediately it was condemned by Kṛṣṇa, "What is this nonsense? You are a military man. Nonviolent?" And similarly, politician, they require all this. Businessman must deal in black market. It is inevitable. Otherwise he cannot improve. Because the world is bad, you, if you become honest, then you cannot make pros . . . cannot become prosperous. Sate sārtham samācaret. Brāhmaṇa's dealing must be very straight and honest. They are not meant for politics or business. They are for transcendental knowledge. Kṛṣṇa conscious person should be all-inclusive. He must be a politician, he must be a Brahmin, he must be a kṣatriya, he must be a śūdra—everything, all-inclusive. Because he is transcendental. In otherwise, he is neither a Brahmin, neither a śūdra, neither a . . . yes. Nāhaṁ vipro na ca nara-patir na yatir vā (Padyāvalī 63). Neither of these. In other side he is everything. That is Kṛṣṇa conscious. As Kṛṣṇa is sometimes cowherd boy, politician, sometimes dancing with, artist—He is everything, not one-sided.

Prabhupāda: So all food is finished?

Mahāvīra: All vegetable, all purīs.

Devotee: I think there were some other books also. I didn't check that.

Prabhupāda: Something he must take. He will read, understand our philosophy.

Saurabha: Yes. I got a letter from Dharmādhyakṣa up in Surat two months ago. He was invited to the White House after our . . . he had an exhibition at Vancouver, that Habitat. So it was a world conference of solution to life, living. So he was invited. He met some of the officials there. He was invited to Washington, but he had to wait for Carter to become the President, because then it would be fifty percent more favorable because they have a relationship. And there these people . . . they . . . he said there's a great chance they will help us in India. So he is going to go there and speak with the . . .

Saurabha: No, Washington, D.C. That's in America. They invited one of our devotees there to discuss this Māyāpur and all this social type of . . .

Saurabha: Dharmādhyakṣa. He's writing for that Back to Godhead magazine. He worked with Gurudāsa together.

Prabhupāda: His article, one is there?

Prabhupāda: So he met him.

Saurabha: He met . . . not Carter. He met the government officials who were representing the United States Government at that exhibition, and they were very favorable. They were one of the most favorable, he said, the United States.

Hari-śauri: Actually, it's the only practical solution.

Jagadīśa: That's how he gained his money.

Pradyumna: He started out in the military. He was in the Navy. Then afterwards . . . his father had a peanut farm, and then his father became sick, so then he gave up his Navy thing. He came back to take care of the family. Then he began that peanut business. Now he doesn't have to do it any more because now he has made millions. I think he's very . . . he is wealthy man, very wealthy. (break)

Prabhupāda: . . . capture American government. Then all world will follow. As they are known as Communist, we should be known as Hare Kṛṣṇas. We are already known as such, Hare Kṛṣṇas. Keep that name. People at least chant Hare Kṛṣṇa.

Prabhupāda: This is already well advertised all over the world. So keep this name, Hare Kṛṣṇas. "Vote for Hare Kṛṣṇas." Anywhere you live, you chant Hare Kṛṣṇa. (yawns) All right, you can go. (devotees offer obeisances) (end)