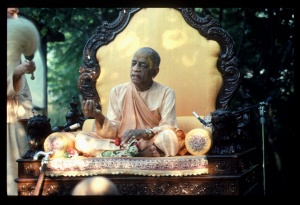 Prabhupāda: Yes. They are stoning animals.

Prabhupāda: Yes. So now civilization is not stoning the animals. "I have . . . (indistinct) . . . slaughterhouses." This is their civilization.

Prabhupāda: They remain the same thing, the animal eaters, but the process has changed. Process changed. Instead of stoning, in big, big cities . . .

(someone asks something in Hindi) (aside: Ah. All right.)

Prabhupāda: . . . you stand here, open up to the slaughterhouse, butcher. This is going on. Your standard remains the same.