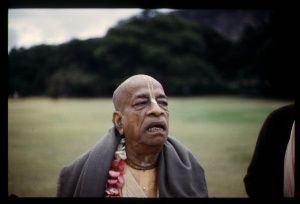 Prabhupāda: The king and the daughter went to a great muni's house, a saintly person. Cyavana Muni, Cyavana Muni. And the daughter, young daughter, out of ignorance, she committed some offense, took one, what is called, straw and pierced through one insect. The muni was sitting there as insect. So the result was, because she offended, all the men of the king—means the soldiers, the secretaries, the ministers—they stopped passing urine and stool.

Hari-śauri: The muni was there in the form of an insect?

Hari-śauri: And she pierced him. Oh.

Prabhupāda: So the result was that all of them became without any passing of stool. So the king could understand there is some offense. So . . . because formerly the kings were saintly persons. He asked all his men, "What you have done?" Then the girl said, "Father, I have done something." Then he made this plea, that "Kindly excuse this girl . . . out of ignorance . . ." He was very angry, that Cyavana Muni. His attitude was always angry. Then all of them became very much aggrieved. Then she (he) asked: "Whether your girl is married?" King could understand that "He wants to marry my daughter. Otherwise, why he's inquiring?" And he was so old . . . I have got my skin still tight. All loose.

Hari-śauri: He was all slack.

Prabhupāda: And he was old. So he had to agree. Otherwise, the whole thing was catastrophe. So the king said: "Yes. She's not married. If you like I can offer my daughter to you." Then everything was settled up. But the daughter was young, and he was like her grand . . . great-grandfather. (laughs) Match was not at all suitable, but he had to offer. So this girl also took it seriously, and she was serving the old husband very faithfully like honest, chaste wife, "Never mind." Then, some days after, the same saintly person was visited by two heavenly physicians, aśvinī-kumāras. The aśvinī-kumāras, they had some difficulty. They were not allowed in the society of the demigods while drinking soma-rasa. They had some defects, something like that. So when the physician came to see Cyavana Muni, he said that, "If you can give me young age, beautiful, you can make me by your treatment beautiful young man, which is very pleasing to young girls, then I shall give you the facility of drinking soma-rasa in the society of demigods." "Yes." So he made him very nice, beautiful-looking young man by taking him to a certain lake, and they dipped down, and all of them became fresh young men, beautiful, very beautiful. So this chaste wife, she could not recognize, "Who is my husband?" They look all very beautiful young men.

Prabhupāda: No, Cyavana became young and the aśvinī-kumāras also became . . .

Hari-śauri: Oh, they all went in.

Prabhupāda: All. They dipped down in a certain lake. In this way, he became a very beautiful young man. Then for soma-yajña, his father-in-law, the daughter's father, came. He came. So he was surprised, "How is that? My daughter is with another young man?" He became angry, "My dear daughter, what is this? You are defaming your husband's family and my family." He began to chastise like that. And just see. Because he sees that, "I got my daughter married with old Cyavana. How is that, with a young man?" Just see. Condemned like anything. And she was laughing. She knew that, "I have not changed my husband. A change of body." Then she said: "My dear father, don't be angry. He's your real son-in-law. He has become now young by treatment." Then he was very pleased and embraced her (his) daughter that, "You are so nice." This is Vedic civilization. Even one has got old, going-to-die husband, she cannot change. This is the chastity.

Hari-śauri: Once a woman was married, then that was finished. No connection with another man.

Prabhupāda: No, no. That one marriage is sufficient. She must remain very faithful to her husband, chaste. That is wanted. Not that "I do not like this husband. I'll change." That is not wanted.

Prabhupāda: Whatever your father and mother has chosen, that's all. He's your worshipable husband. This is the . . . this point I wanted to bring. And his (her) father was surprised, "How is that? I got you married with an old man. Somehow or other, circumstances, I was obliged. How is that you have picked up one young man?" He chastised her like anything. Then when he came to understand that the same old man has become now young man by medical treatment, then he was satisfied. So you cannot change. I have seen it. One, my father's friend, he was very old man. My father was also. He was at that time not less than sixty-five. But his wife died, and he was married with another young girl. But his sister forced him to marry that, "Unless you marry, who will look after you? You have no children." But I have seen that young woman who was married with that gentleman . . . in our childhood we used to called her didi. Didi means elder sister. So the relationship was very thick and thin. But that old man, not less than sixty-five, and this young woman, utmost twenty to twenty-five. She was serving the husband like anything. We have seen it. There is no question of changing or being dissatisfied.

Hari-śauri: Now they bring them up to be independent.

Prabhupāda: It is a question of culture. Culture. She was king's daughter, royal, and married her with a muni, and old, rotten—older than me. All the skin has become slackened. But still she was serving him just like worshipable lord. The age difference is great-grandfather and great-granddaughter. You'll find in Bhāgavatam. Lord Śiva, he could not construct even a house. He was living underneath a tree. And his wife, Durgā, sṛṣṭi-sthiti-pralaya-sādhana-śaktir ekā (BS 5.44). She can create a new world, so powerful, Durgā. She's living with her husband underneath a tree. Never claims, "My dear husband, if you cannot, I can make one." There is a story about that, that "People criticize us. All right, let us have some house." So Lord Śiva, Durgā, both of them capable to do anything. So they constructed a very nice gold house. "Now we shall live." So there is new house entering ceremony. So one Gargamuni was invited as brāhmaṇa. Many other brāhmaṇas. So they began to eat so much . . . that story I'm now forgetting. Then whatever stock they have finished, then when after eating, when they wanted, "Give us dakṣiṇā," because after eating there is . . . so "Lord Śiva, where shall I get everything? I have finished." Then they became puzzled what to do. So Lord Śiva said, "All right, you take this house." (laughs) Again they became underneath a tree. "All right, as dakṣiṇā you take this house. Don't bother." Their house entrance ceremony was there. As a result of that ceremony they became again underneath a tree. (aside to someone else) What they're doing? (end)