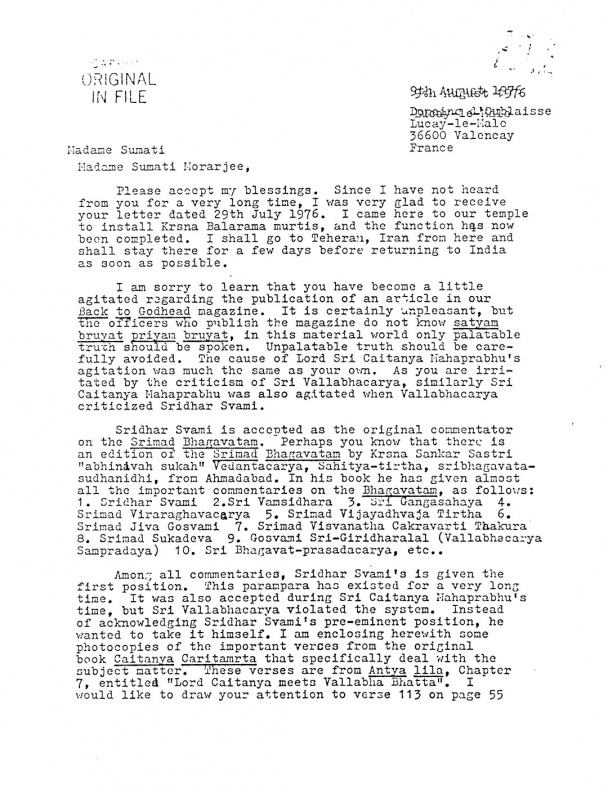 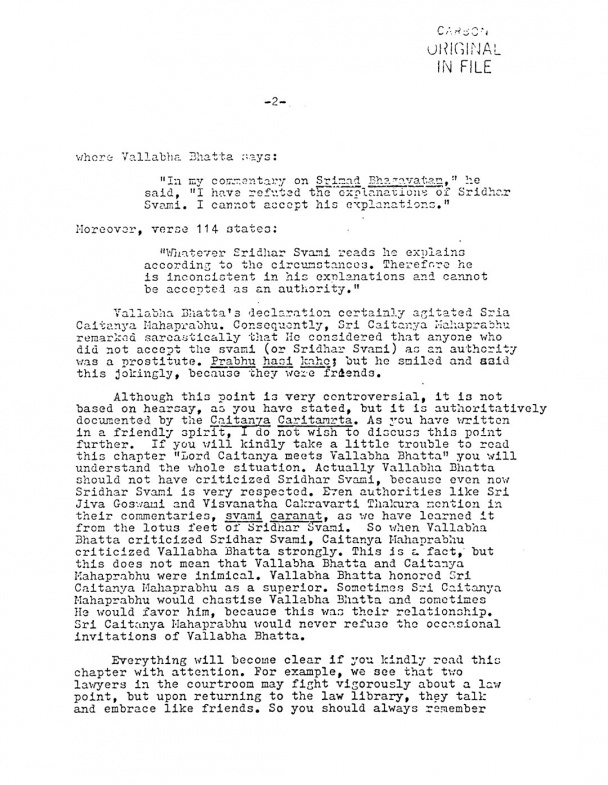 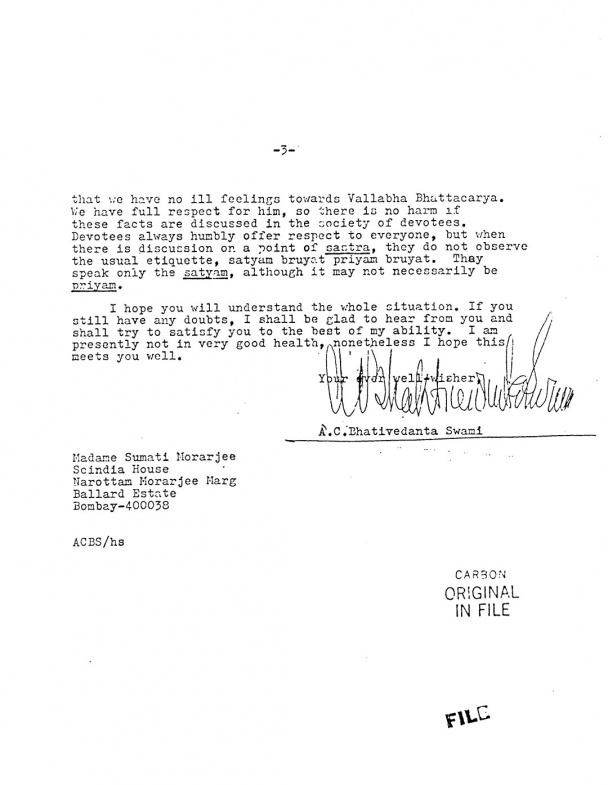 Please accept my blessings. Since I have not heard from you for a very long time, I was very glad to receive your letter dated 29th July 1976. I came here to our temple to install Krsna Balarama murtis, and the function has now been completed. I shall go to Tehran, Iran from here and shall stay there for a few days before returning to India as soon as possible.

I am sorry to learn that you have become a little agitated regarding the publication of an article in our Back to Godhead magazine. It is certainly unpleasant, but the officers who publish the magazine do not know satyam bruyat priyam bruyat, in this material world only palatable truth should be spoken. Unpalatable truth should be carefully avoided. The cause of Lord Sri Caitanya Mahaprabhu's agitation was much the same as your own. As you are irritated by the criticism of Sri Vallabhacarya, similarly Sri Caitanya Mahaprabhu was also agitated when Vallabhacarya criticized Sridhara Svami.

Sridhara Svami is accepted as the original commentator on the Srimad Bhagavatam. Perhaps you know that there is an edition of the Srimad Bhagavatam by Krsna Sankara Sastri "abhinavah sukah" Vedantacarya, Sahitya-tirtha, sribhagavatasudhanidhi, from Ahmedabad. In his book he has given almost all the important commentaries on the Bhagavatam, as follows: 1. Sridhara Svami 2. Sri Vamsidhara 3. Sri Gangasahaya 4. Srimad Viraraghavacarya 5. Srimad Vijayadhvaja Tirtha 6. Srimad Jiva Gosvami 7. Srimad Visvanatha Cakravarti Thakura 8. Srimad Sukadeva 9. Gosvami Sri-giridharalal (Vallabhacarya Sampradaya) 10. Sri Bhagavat-prasadacarya, etc..

Among all commentaries, Sridhara Svami's is given the first position. This parampara has existed for a very long time. It was also accepted during Sri Caitanya Mahaprabhu's time, but Sri Vallabhacarya violated the system. Instead of acknowledging Sridhara Svami's pre-eminent position, he wanted to take it himself. I am enclosing herewith some photocopies of the important verses from the original book Caitanya Caritamrta that specifically deal with the subject matter. These verses are from Antya lila, Chapter 7, entitled "Lord Caitanya meets Vallabha Bhatta". I would like to draw your attention to verse 113 on page 55 where Vallabha Bhatta says:

"In my commentary on Srimad Bhagavatam," he said, "I have refuted the explanations of Sridhara Svami. I cannot accept his explanations."

"Whatever Sridhara Svami reads he explains according the circumstances. Therefore he is inconsistent in his explanations and cannot be accepted as an authority."

Vallabha Bhatta's declaration certainly agitated Sri Caitanya Mahaprabhu. Consequently, Sri Caitanya Mahaprabhu remarked sarcastically that He considered that anyone who did not accept the svami (or Sridhara Svami) as an authority was a prostitute. Prabhu hasi kahe; but he smiled and said this jokingly, because they were friends.

Everything will become clear if you kindly read this chapter with attention. For example, we see that two lawyers in the courtroom may fight vigorously about a law point, but upon returning to the law library, they talk and embrace like friends. So you should always remember that we have no ill feelings towards Vallabha Bhattacarya. We have full respect for him, so there is no harm if these facts are discussed in the society of devotees. Devotees always humbly offer respect to everyone, but when there is a discussion on a point of sastra, they do not observe the usual etiquette, satyam bruyat priyam bruyat. They speak only the satyam, although it may not necessarily be priyam.

I hope you will understand the whole situation. If you still have any doubts, I shall be glad to hear from you and shall try to satisfy you to the best of my ability. I am presently not in very good health, nonetheless I hope this meets you well.