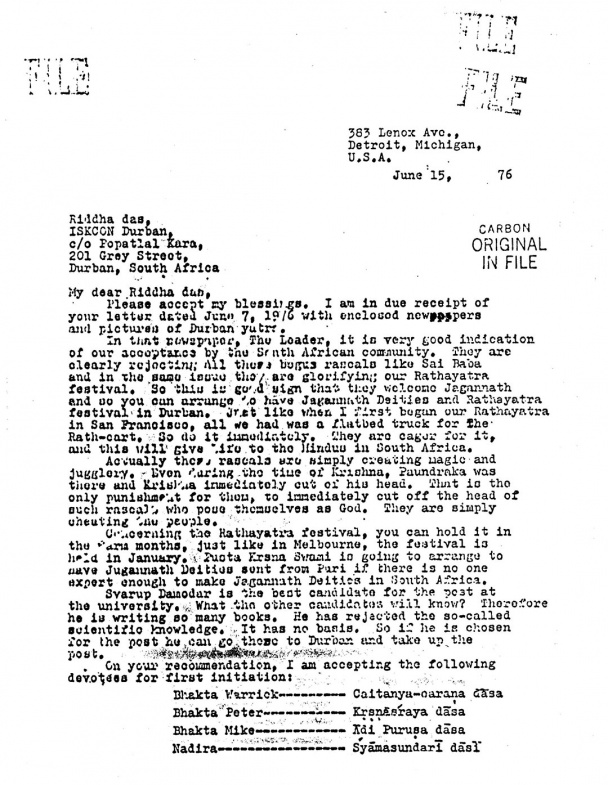 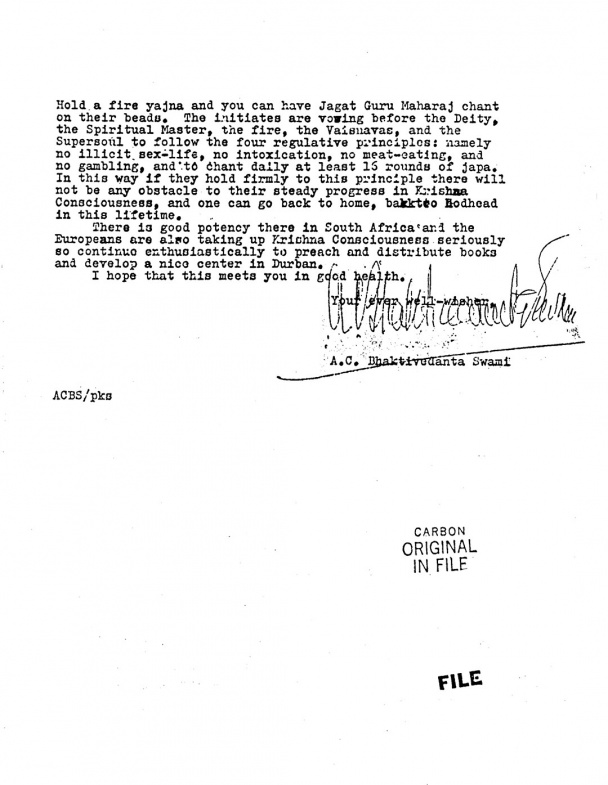 My dear Riddha das,
Please accept my blessings. I am in due receipt of your letter dated June 7, 1976 with enclosed newspapers and pictures of Durban yatra.

In that newspaper, The Leader, it is very good indication of our acceptance by the South African community. They are clearly rejecting all these bogus rascals like Sai Baba and in the same issue they are glorifying our Rathayatra festival. So this is good sign that they welcome Jagannath and so you can arrange to have Jagannath Deities and Rathayatra festival in Durban. Just like when I first began our Rathayatra in San Francisco, all we had was a flatbed truck for the Ratha-cart. So do it immediately. They are eager for it, and this will give life to the Hindus in South Africa.

Actually these rascals are simply creating magic and jugglery. Even during the time of Krishna, Paundraka was there and Krishna immediately cut of his head. That is the only punishment for them, to immediately cut off the head of such rascals who pose themselves as God. They are simply cheating the people.

Concerning the Rathayatra festival, you can hold it in the warm months, just like in Melbourne, the festival is held in January. Pusta Krsna Swami is going to arrange to have Jagannath Deities sent from Puri if there is no one expert enough to make Jagannath Deities in South Africa.

Svarup Damodar is the best candidate for the post at the university. What the other candidates will know? Therefore he is writing so many books. He has rejected the so-called scientific knowledge. It has no basis. So if he is chosen for the post he can go there to Durban and take up the post.

On your recommendation, I am accepting the following devotees for first initiation:

Hold a fire yajna and you can have Jagat Guru Maharaj chant on their beads. The initiates are vowing before the Deity, the Spiritual Master, the fire, the Vaisnavas, and the Supersoul to follow the four regulative principles: namely no illicit sex-life, no intoxication, no meat-eating, and no gambling, and to chant daily at least 16 rounds of japa. In this way if they hold firmly to this principle there will not be any obstacle to their steady progress in Krishna Consciousness, and one can go back to home, back to Godhead in this lifetime.

There is good potency there in South Africa and the Europeans are also taking up Krishna Consciousness seriously so continue enthusiastically to preach and distribute books and develop a nice center in Durban.