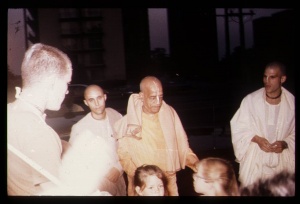 Rāmeśvara: Yes. He spoke with me for another one hour, very interested. He writes for many different magazines also, not just one magazine. He's called "freelance writer." (break)

Rāmeśvara: He understands our philosophy, but he is not ready to surrender. He very much appreciated the dioramas that Baradrāj is working on. We took him over to see them. Every one of the newspapermen is anxious to get a story on the opening of the museum.

Rāmeśvara: Then, eventually, Baradrāj wants to have big museum in the city, not necessarily in our building, because the building may not have enough space. Śrīla Prabhupāda, I think it will be more prestigious if we use the art paintings to be displayed in museums or art galleries.

Rāmeśvara: That way, wealthy, upper-class people will get a chance to appreciate. (break)

Prabhupāda: . . . said that beef-eating is the cause of cancer.

Prabhupāda: Which is correct?

Hṛdayānanda: Too much addicted. (Prabhupāda laughs)

Rādhā-vallabha: This cancer problem seems to be increasing. Previously only old . . . we would only hear of old people getting it. Now young people are getting it also. It is becoming very common.

Rādhā-vallabha: Yes, two . . . one girl here got it. Another girl was suspected of having it.

Prabhupāda: What is the symptom?

Rādhā-vallabha: Generally, with women, they get some lump . . .

Rāmeśvara: Pain. The symptom is lump and great pain. Cancer is said to be some bacteria or virus cells that are inside the body, eating the body organs.

Rāmeśvara: And the only idea they have for curing cancer is to cut out the diseased area from the body, remove that part of the body.

Devotee: Kill it with X-ray.

Rādhā-vallabha: Yeah. They also try to bombard it with radiation, and that has its very bad effects. Their hair falls out. They get burns, sick.

Rāmeśvara: Many modern sociologists, they are predicting that in twenty or thirty years the population will increase so much on this planet that the cities will be very, very crowded, and there will be many, many new problems: no room for so many cars and not enough food, not enough housing. They predict very, very . . . and then the result will be rioting. So many people will not have enough food and good places to live that they will . . .

Prabhupāda: So why don't you go back to home, back to Godhead? (laughs) We are trying to save them. Why you are rotting in this problem? (out of car) That reporter?

Hari-śauri: "Death is not a problem."

Prabhupāda: They are predicting so many problems, and still the rascals will say there is no problem. Padaṁ yad vipadām (SB 10.14.58). Material world is so made that in every step there is problems. (break) . . . na teṣām.

Rāmeśvara: They say that as the population increases in the cities, there must be rioting and fighting. There will be so many people without the minimum necessities of life, so much exploitation of the rich and upper class.

Prabhupāda: Why not go to New Vrindavan? That they will not do.

Rāmeśvara: There is no training how to live in New Vrindavan. They are educated only to live in the cities and work like mūḍhas. Even now, one of the biggest problems that they're predicting is unemployment. They cannot . . .

Prabhupāda: Yes. In America it has begun, what to speak of other countries.

Hṛdayānanda: Worse in other countries.

Rāmeśvara: Today there are many articles in the papers that college students graduate and cannot find any jobs, so that their degree is useless.

Prabhupāda: This . . . this was the problem in India, and now it is also in America. (break)

Mahendra: . . . graduating with Ph.D.'s and then becoming truck drivers.

Candanācārya: Śrīla Prabhupāda said years ago that our colleges are producing beggars. They get a degree and then they beg.

Rādhā-vallabha: . . . reporter that he was liberated. Later on, he was asking whether you were joking. (laughter) (break)

Duryodhana-guru: It says in the Śrīmad-Bhāgavatam, āruhya kṛcchreṇa paraṁ padaṁ tataḥ patanty adho 'nādṛta-yuṣmad-aṅghrayaḥ (SB 10.2.32). So this refers to someone who has attained Brahman realization, that he must fall down because he does not take shelter at Kṛṣṇa's lotus feet. Does this also refer to someone who has attained Paramātmā realization?

Baradrāj: What did he say?

Rāmeśvara: He said that's all right, because the fish are happy.

Prabhupāda: And why did you not say that "I'll eat you"? (laughter)

Rāmeśvara: We told him it would take him one million years to get human birth again, and he was shocked.

Prabhupāda: Yes, it's a fact. (break)

Rāmeśvara: . . . say that when the unemployment problem becomes very great, it will cause the government to start wars with other countries just to engage the men.

Prabhupāda: Where the government will get money?

Jagannātha-sūta: . . . cutting off the head when you have a headache.

Prabhupāda: Yes. (break) . . . of the age of Kali-yuga, difficulties will increase. That's a fact. Very, very difficult. We have passed only five thousand years, and there is balance of 427,000. Hundreds of years, thousands. (break) . . . only go back to home, back to Godhead. (break) . . . has therefore advised that "Don't be engaged in all this nonsense activities, economic development. Simply become Kṛṣṇa conscious." (break) . . . promises that, "For such persons who are in Kṛṣṇa consciousness, I'll take charge for their maintenance directly." yoga-kṣemaṁ vahāmy aham (BG 9.22). (break) . . . envious of one another. They see that, "These people, they do not do anything, and living so comfortably."

Rāmeśvara: They say that in the future, because of the overpopulation problem, there will not be sufficient foodstuffs, so they will have to develop eating simply by taking pills.

Prabhupāda: The scientists will do that, but we shall take milk preparations.

Hari-śauri: We will drink milk, and they can drink their urine.

Candanācārya: . . . scientist, Buckminster Fuller, who doesn't agree with the other scientists. He says that with proper organization the entire population of the planet could live in California.

Prabhupāda: In Los Angeles we find so many houses: "Now Renting." (break)

Rādhā-vallabha: They told us . . . (indistinct) . . . in school that in India there are so many people, practically you cannot even move. But when we go to India we see there is miles and miles of empty land, simply a few cities where it's crowded.

Nalinīkaṇṭha: . . . there were so many people just in India that Mahārāja Ugrasena had ten quadrillion bodyguards alone . . . (indistinct) . . . 20 feet tall.

Prabhupāda: At that time the India was whole planet.

Rādhā-vallabha: . . . the body moves because of the presence of the soul. The scientists say that the body moves due to electronic impulses from the brain that cause the muscles to contract.

Prabhupāda: Rascal, why don't you produce it? Why you talk nonsense?

Rādhā-vallabha: I can't produce. It has happened by evolution over many millions of years. I don't have that long.

Prabhupāda: So why you are dreaming? Do it practically.

Rādhā-vallabha: We are not saying that we can do it. We are just explaining it.

Prabhupāda: Who cares for your explanation?

Rādhā-vallabha: We have so many followers.

Candanācārya: One day we will do it.

Rāmeśvara: There is one famous movie or a book called Frankenstein, and in that . . . (break)

Candanācārya: Prisoners, they spend so much of their life in the prison house that when they are given an opportunity to leave, they refuse. (Prabhupāda laughs) They say: "No, I'm so accustomed to stay here, I'd rather just stay in prison, please." So they beg the governor to let them stay in prison.

Prabhupāda: If he comes out, he faces unemployment. Better to remain here. (break)

Jagadīśa: . . . how to prolong life and stop death. So Dr. Frog has a recent theory that (Prabhupāda laughs) if a person fasts on every third day, he can prolong his life, twice as long. They are experimenting with rats on this basis. (break)

Trivikrama: And here also, Śrīla Prabhupāda, in the ocean they're surfing, extreme cold.

Rādhā-vallabha: It's so cold that they sit in the water and they just tremble.

Prabhupāda: That is also another punishment, voluntary.

Hari-śauri: Everybody's doing tapasya, but for their own cause.

Rādhā-vallabha: . . . people also do that. They wake up at two or three in the morning and drive and stand in the water for eight or ten hours, just freezing, waiting to catch a fish.

Rādhā-vallabha: Just for fun, not even for eating.

Candanācārya: There are some fishermen that spend six months out of the year far out at sea just fishing. They sleep only three or four hours a day. They don't see any other people. They just live together on a big boat. (break)

Baradrāj: So the only way to break that cycle is ajñāta-sukṛti?

Prabhupāda: Why ajñāta? Why not jñāta? You rascal, you take Kṛṣṇa conscious. Why ajñāta? Be informed. This is the only way.

Baradrāj: He can take it directly, without having performed some pious activities?

Prabhupāda: He'll take . . . no, if he accepts, that is pious. And Kṛṣṇa comes personally to canvass, "You rascal, take this and be happy." But he'll not do. Although it takes millions of years to come to that understanding, Kṛṣṇa personally comes, "You take it. I assure you, I shall give you all protection," but they'll not take it.

Prabhupāda: Yes. When He comes here, so He comes for everyone. When He teaches Bhagavad-gītā, is it for Arjuna? Everyone. (break) . . . mṛdaṅga play is not distinct in the record.

Kṛṣṇa-kānti: Not distinct enough? I can make it louder.

Indian devotee: Prabhupāda, do you want me to send it to you?

Prabhupāda: Eh? You have translated?

Indian devotee: Yes, I have here the first chapter.

Prabhupāda: Oh, you go on reading.

Prabhupāda: Oh, this is . . . (says something in joking disgust, devotees laugh loudly)

Jayādvaita: I can read like that, too. (more laughter) (break)

Rāmeśvara: . . . that to do the book Scientific Basis would take two weeks.