760520 - Letter to Revatinandana written from Honolulu 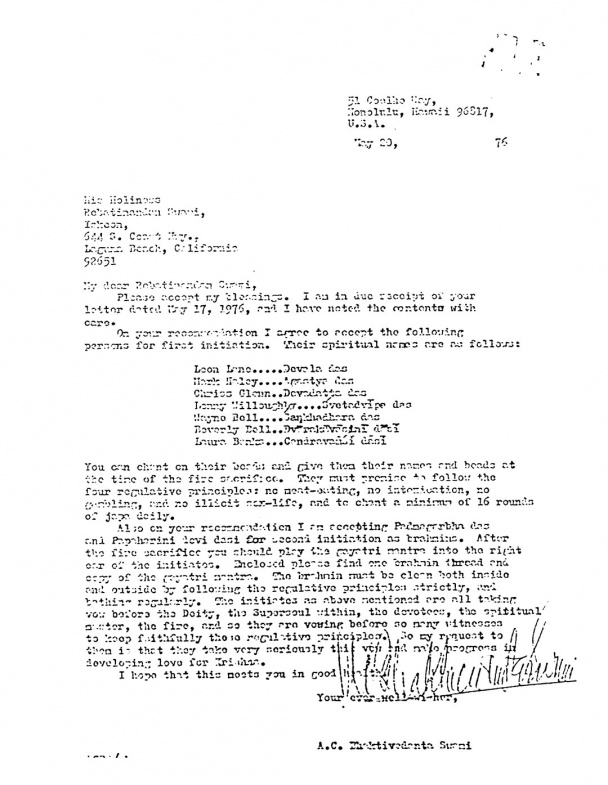 
Please accept my blessings. I am in due receipt of your letter dated May 17, 1976, and I have noted the contents with care.

On your recommendation I agree to accept the following persons for first initiation. Their spiritual names are as follows:

You can chant on their beads and give them their names and beads at the time of the fire sacrifice. They must promise to follow the four regulative principles: no meat-eating, no intoxication, no gambling, and no illicit sex-life, and to chant a minimum of 16 rounds of japa daily.

Also on your recommendation I am accepting Padmagarbha das and Papharini devi dasi for second initiation as brahmanas. After the fire sacrifice you should play the gayatri mantra into the right ear of the initiates. Enclosed please find one brahmana thread and copy of the gayatri mantra. The brahmana must be clean both inside and outside by following the regulative principles strictly, and bathing regularly. The initiates as above mentioned are all taking vow before the Deity, the Supersoul within, the devotees, the spiritual master, the fire, and so they are vowing before so many witnesses to keep faithfully these regulative principles. So my request to them is that they take very seriously this vow and make progress in developing love for Krishna.