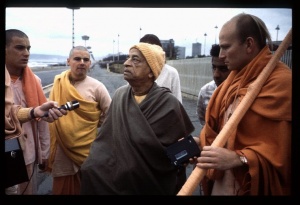 Govinda dāsī: May I put a little flowers around the, erm, you know, the little topknot? I don't know what it's called. The bunch of hairs on the Deities?

Devotee: (discussion between Govinda dāsī and devotee) What time is Gaurasundara coming?

Devotee: But are you going to call him? He could bring me that other typewriter. You need to remind him, or he'll forget.

Prabhupāda: Now already he has admitted. "Yeah, finally my presence in New Vrindavan is more needed now that we are being requested by Your Divine Grace to make an attempt for self-sufficient." The hint is already given.

Devotee: He's doubtful that they can do it. I think the next sentence?

Prabhupāda: "We trust in your higher wisdom that self-sufficient can be realized somehow or other, and we will try for it." Yes, sometimes you can . . . (indistinct)

Devotee: He doesn't sound like he is very hopeful.

Prabhupāda: Hopeful, then how it can be?

Devotee: Someone else should manage, who has enthusiasm.

Prabhupāda: It's not possible if they . . . (indistinct) . . . they . . . if they think that they can do some business, let them do it. What can be done? If they cannot produce food, then let them do business.

Prabhupāda: Anything can be done. For doing business, there are so many things.

Devotee: There is something that can be arranged on that farm.

Devotee: There must be some craft or various . . .

Prabhupāda: But the whole New Vrindavan idea was that milk and production, something from that, that's all. And that is possible. But they don't work.

Prabhupāda: That's the trouble. So you can see it that is why. They think, "Now we have become devotee of Kṛṣṇa, why we shall work?"

Devotee: And most of the men who live there, they only stay a short time, and they go away. Then someone else comes, and go away. So there is no one to maintain it.

Prabhupāda: They come and eat and go.

Govinda dāsī: We have one married couple here that came from New Vrindavan, but they're not living in the temple—they're living on the big island. But whenever the devotees went to the big island, they wouldn't even feed them, the devotees on the preaching mission.

Govinda dāsī: There was, there was one family of devotees that came from New Vrindavan. They were sort of semi-hippy, semi-devotee. And . . . and so they got, and they moved to Hawaii—not to this island but to another island in the country. And we sent one party of devotees there for starting a temple, for doing preaching work. And they were just getting started, so they asked: "Can we stay at your house just temporarily?" And they said: "Oh, all right. You can stay there for a few days." But they wouldn't even feed them. They would go into the other room and eat; they would . . .

Govinda dāsī: They wouldn't even feed the devotees. It was not very nice. And then the children were performing āratik, and they were saying, "Oh, how cute. How sweet," and everything. But when it came to practical . . . practically helping to start our temple there, there was no help at all. It was . . . it wasn't very helpful.