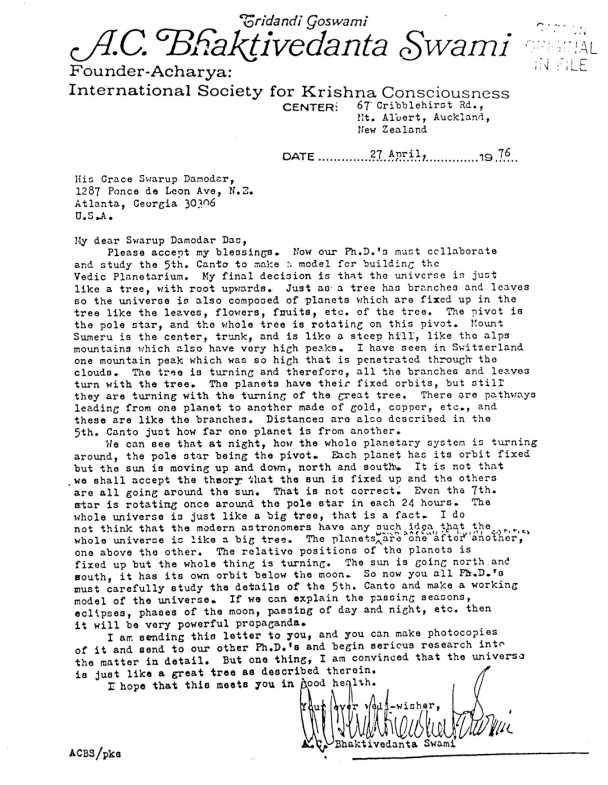 Please accept my blessings. Now our Ph.D's must collaborate and study the 5th Canto to make a model for building the Vedic Planetarium. My final decision is that the universe is just like a tree, with root upwards. Just as a tree has branches and leaves so the universe is also composed of planets which are fixed up in the tree like the leaves, flowers, fruits, etc. of the tree. The pivot is the pole star, and the whole tree is rotating on this pivot. Mount Sumeru is the center, trunk, and is like a steep hill, like the alps mountains which also have very high peaks. I have seen in Switzerland one mountain peak which was so high that is penetrated through the clouds. The tree is turning and therefore, all the branches and leaves turn with the tree. The planets have their fixed orbits, but still they are turning with the turning of the great tree. There are pathways leading from one planet to another made of gold, copper, etc., and these are like the branches. Distances are also described in the 5th Canto just how far one planet is from another.

We can see that at night, how the whole planetary system is turning around, the pole star being the pivot. Each planet has its orbit fixed but the sun is moving up and down, north and south. It is not that we shall accept the theory that the sun is fixed up and the others are all going around the sun. That is not correct. Even the 7th star is rotating once around the pole star in each 24 hours. The whole universe is just like a big tree, that is a fact. I do not think that the modern astronomers have any such idea that the whole universe is like a big tree. The planets which are full of living entities are one after another, one above the other. The relative positions of the planets is fixed up but the whole thing is turning. The sun is going north and south, it has its own orbit below the moon. So now you all Ph.D.'s must carefully study the details of the 5th Canto and make a working model of the universe. If we can explain the passing seasons, eclipses, phases of the moon, passing of day and night, etc. then it will be very powerful propaganda.

I am sending this letter to you, and you can make photocopies of it and send to our other Ph.D.'s and begin serious research into the matter in detail. But one thing, I am convinced that the universe is just like a great tree as described therein.