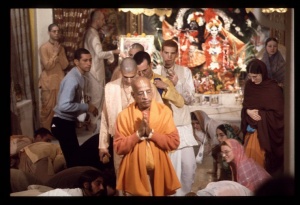 Prabhupāda: Anyway, so he was the father of the Yakṣas, this Kuvera. So Dhruva Mahārāja was a great devotee. You have heard the name of Dhruva Mahārāja. He was insulted by his stepmother. When he was young, very young child, so his father had two wives. So the junior wife was very pet to the husband, and the senior wife was not so much pet. So, but both of them had two sons. So the junior's wife son was sitting on the lap, a small child. So Dhruva Mahārāja was the son of the senior wife. As a child, he was also trying to sit down on the lap of the father. The other brother, he does not know stepbrother is brother. But the junior wife, she said, "My dear son, you cannot sit down on the lap of your father because you are not born in my womb. And that boy, the other boy, he is sitting on the lap of your father because he is born in my womb." So it was sarcastic remark, but Dhruva Mahārāja, although he was a child, four or five years old, he took it very seriously. A kṣatri . . . kṣatriya . . . (Hindi) He became very angry. So he immediately left the place and went to his own mother, that "Stepmother has insulted me like this." He began to cry, and the mother said, "My dear son, what can I do? Your father does not treat me even as a maidservant, so I cannot take any step." "So how I can take revenge on it?" She said, "If Kṛṣṇa likes, then you can take revenge. Otherwise there is no possibility." "Where is Kṛṣṇa? I want to see Him." (Hindi) She said, "I have heard that Kṛṣṇa is in the forest. Big, big saintly persons go there and meet Him, so far I know, my dear son." "So I'll go there."

So this four-year, five-years-old boy went to the forest, and he saw Kṛṣṇa within, Viṣṇu, within six months by his austerity, by meditating and observing austerity, living on water, on folio (foliage), air, in this way, six months, he got the opportunity of seeing Viṣṇu directly. And there is a big story. Later on he was enthroned on the father's seat. He became very big king. But his younger brother, the same brother, was killed by the Yakṣas in the fight. So he wanted to take revenge on the Yakṣas, and he was killing the Yakṣas like anything. Then the Yakṣas' father, Kuvera, he came to him with other . . . recommendation of other demigods, that "You are a Vaiṣṇava. It is not good for you that you are killing so many Yakṣas indiscriminately. Now, whatever is done, you stop it." Then this Kuvera was very much pleased because his descendants were being killed and the fight is stopped, so he was very pleased. This is our point to understand. The Kuvera was very pleased, and he offered Dhruva Mahārāja that "You have become so kind. You could kill all my descendants, but you have stopped, so I am very much pleased upon you that you saved my family. So I want to give you some benediction. Whatever benediction you want, you can take from me." Now this benediction . . . He is Kuvera. He is the treasurer of the demigods, unlimited wealth. And he offered him that "Whatever you like, you can take." But what Dhruva Mahārāja did? Dhruva Mahārāja said that "Kuverajī, I am very much obliged to you that you are offering me benediction and you are the treasurer of the demigods; I can take money from you as much as I like. But my prayer to you—that I don't require any money. Kindly give me your blessings that I'll remain a devotee of Kṛṣṇa."

Prabhupāda: So I have got now the Punjab National Bank, (laughter) so you are ready to give me money, but I request you that you bless me that I may remain a servant of Kṛṣṇa.

Indian: Should I say a story about the present Kuveras?

Indian (1): Please. Now Mahārājajī has told you the story about the Kuvera of the old days. I will tell you the story of the Kuveras of the today. That is us. In fact, it was in a paper. There was a cartoon. A bank manager, means today's Kuvera, was sitting in an office, and he received a call, such and such big Dalmia or Birla, "We want two lakhs of rupees just now." He said, "Yes, come along. Here is our Swāmījī. He'll pay you two lakhs." Then there was another call. There was some industrialist or a small-scale industrialist man. He said, "I want to start an industry. Could I get a lakh of rupees as a loan from you?" He said, "Yes, yes. Please do come along and we'll make some arrangements." Then he also . . . And ultimately the third picture in the cartoon, that the manager—that is today's Kuvera—he goes out of the bank. He is standing on the gate, and he says to that caukidāra, (Hindi punchline; something about a rickshaw) (laughter). It is today's Kuvera you see is not in any position to give anything. He also wants your blessings, you see, in fact.

Indian (1): So if about the bankers, if you permit me, I'll give you another interesting story. There was a man who was very ill in America, and he had a heart trouble. In fact he had no heart, I would say. So, you know, they can replace the hearts nowadays. He went to a hospital, and the doctor offered him, "Here are three hearts. Which one would you like? One is of the general, the other is of a big businessman, and the third is of a banker. What would you like?" So he thought, "Let me have the heart of a . . ."

Indian (2): (Hindi—about opening a branch of the bank)

Indian (1): There seem to be little misunderstanding, not that we are short of any space or any accommodation or anything for which we can't open, but there's a little technical thing that bank license does not permit, and we are immediately taking or for amending the license, and as soon as it is, we'll start. We have no problem of this.

Gurudāsa: Prabhupāda, did you want to tell another story?

Prabhupāda: (laughter) The story is that one poor man was informed by his friend that "Money draws money." That's a fact. If you have got money, you can draw money. So he went to the bank, and the cashier was counting huge amount of money, and he threw his coin on the cash . . . (laughs) and he was waiting: "When the whole money will come to me?" Then the cashier saw this man is standing: "What is it? Why you are standing?" "Sir, I heard that money draws money, so I had one coin. I have dropped with your money. I am waiting when it will come to me." So he said, "No, no. The fact is that: money draws. Now my money has drawn your money." (laughter) So . . . (Hindi)

Indian (1): Perhaps it is in the Bible that "Those who have shall be given more. Those who have not shall be taken of what they have already." I don't whether it's right or not, but more money draws the lesser money.

Indian (1): The new license will be . . . (Hindi conversation with Prabhupāda; much laughter) (end).