760123 - Letter to Ramesvara written from Mayapur 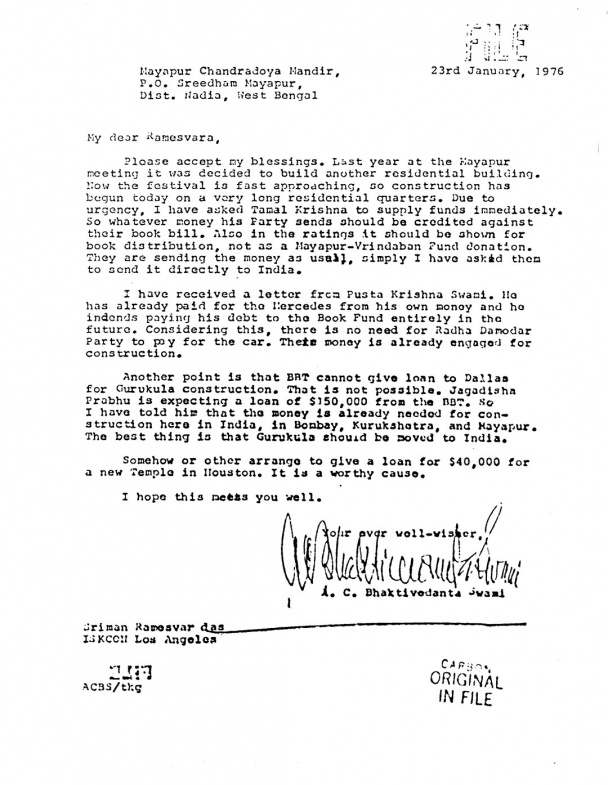 Please accept my blessings. Last year at the Mayapur meeting it was decided to build another residential building. Now the festival is fast approaching, so construction has begun today on a very long residential quarters. Due to urgency, I have asked Tamal Krishna to supply funds immediately. So whatever money his Party sends should be credited against their book bill. Also in the ratings it should be shown for book distribution, not as a Mayapur-Vrindaban Fund donation. They are sending the money as usual, simply I have asked them to send it directly to India.

I have received a letter from Pusta Krishna Swami. He has already paid for the Mercedes from his own money and he intends paying his debt to the Book Fund entirely in the future. Considering this, there is no need for Radha Damodar Party to pay for the car. Their money is already engaged for construction.

Another point is that BBT cannot give loan to Dallas for Gurukula construction. That is not possible. Jagadisha Prabhu is expecting a loan of $150,000 from the BBT. So I have told him that the money is already needed for construction here in India, in Bombay, Kurukshetra, and Mayapur. The best thing is that Gurukula should be moved to India.

Somehow or other arrange to give a loan for $40,000 for a new Temple in Houston. It is a worthy cause.

I hope this meets you well.