760106 - Letter to All Governing Body Commissioners from Tamala Krsna 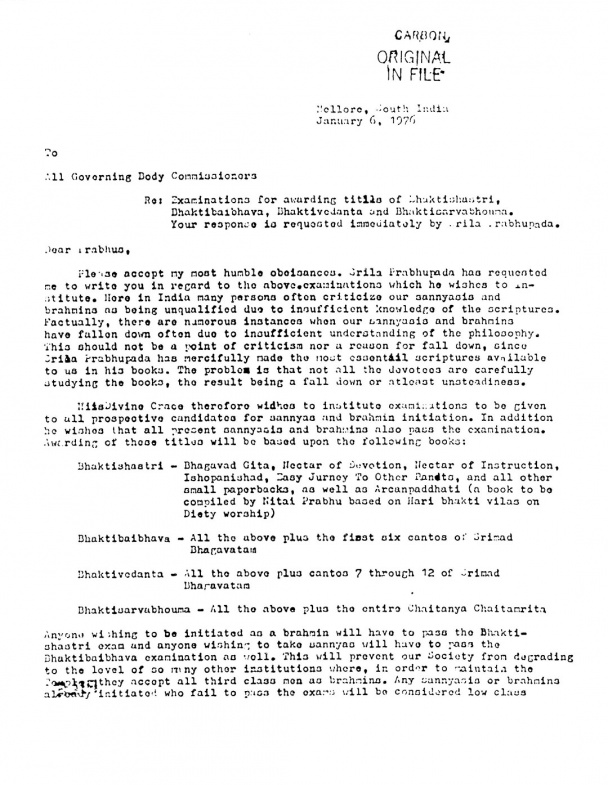 Letter to All Governing Body Commissioners (Page 1 of 2) 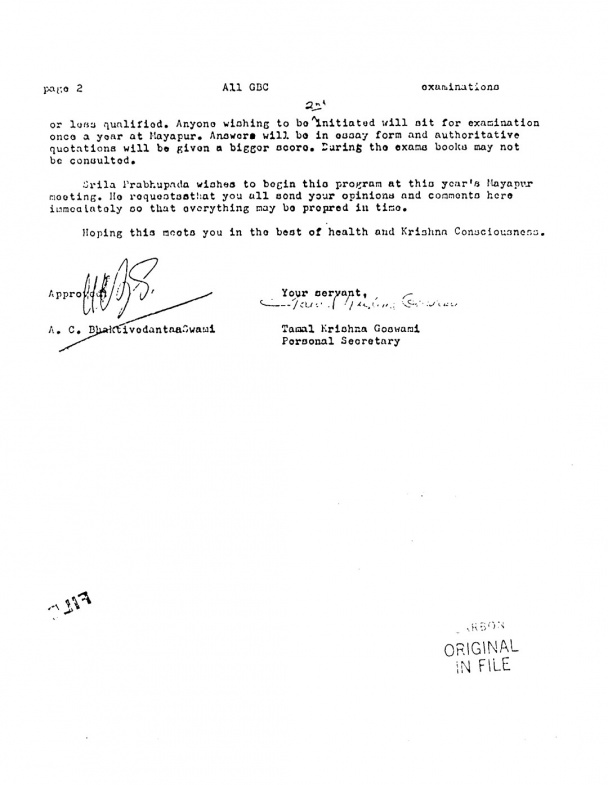 Letter to All Governing Body Commissioners (Page 2 of 2)

Re: Examinations for awarding titles of Bhakti-sastri, Bhakti-vaibhava, Bhaktivedanta and Bhakti-sarvabhauma. Your response is requested immediately by Srila Prabhupada.

Please accept my most humble obeisances. Srila Prabhupada has requested me to write you in regard to the above examinations which he wishes to institute. Here in India many persons often criticize our sannyasis and brahmanas as being unqualified due to insufficient knowledge of the scriptures. Factually, there are numerous instances when our sannyasis and brahmanas have fallen down often due to insufficient understanding of the philosophy. This should not be a point of criticism nor a reason for falldown, since Srila Prabhupada has mercifully made the most essential scriptures available to us in his books. The problem is that not all the devotees are carefully studying the books, the result being a fall down or at least unsteadiness.

His Divine Grace therefore wishes to institute examinations to be given to all prospective candidates for sannyasa and brahmana initiation. In addition he wishes that all present sannyasis and brahmanas also pass the examination. Awarding of these titles will be based upon the following books:

Bhakti-sastri - Bhagavad-gita, Nectar of Devotion, Nectar of Instruction, Isopanisad, Easy Journey To Other Planets, and all other small paperbacks, as well as Arcana-paddhati (a book to be compiled by Nitai Prabhu based on Hari-bhakti-vilasa on Deity worship)

Anyone wishing to be initiated as a brahmana will have to pass the Bhaktisastri exam and anyone wishing to take sannyasa will have to pass the Bhaktivaibhava examination as well. This will prevent our Society from degrading to the level of so many other institutions where, in order to maintain the Temple, they accept all third class men as brahmanas. Any sannyasis or brahmanas already initiated who fail to pass the exams will be considered low class or less qualified. Anyone wishing to be 2nd initiated will sit for examination once a year at Mayapur. Answers will be in essay form and authoritative quotations will be given a bigger score. During the exams books may not be consulted.

Srila Prabhupada wishes to begin this program at this year's Mayapur meeting. He requests that you all send your opinions and comments here immediately so that everything may be prepared in time.

Hoping this meets you in the best of health and Krsna Consciousness.