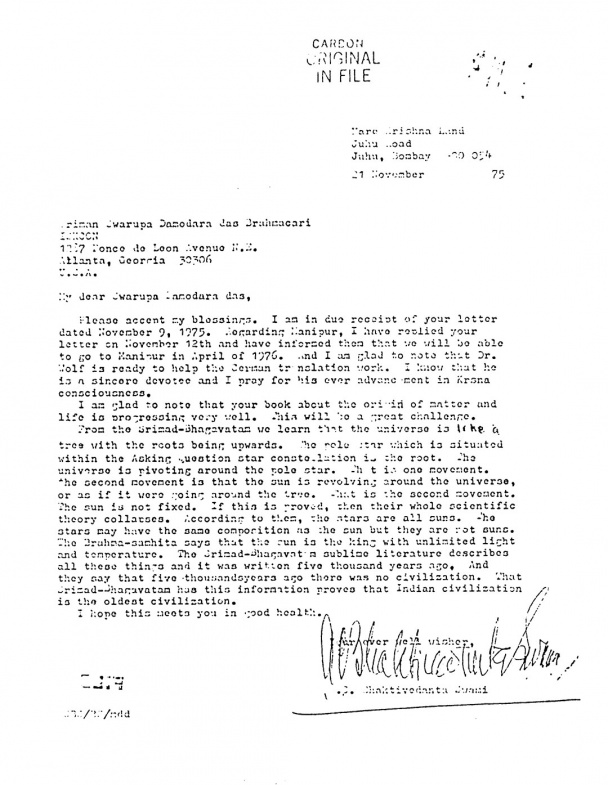 Please accept my blessings. I am in due receipt of your letter dated November 9, 1975. Regarding Manipur, I have replied your letter on November 12th and have informed them that we will be able to go to Manipur in April of 1976. And I am glad to note that Dr. Wolf is ready to help the German translation work. I know that he is a sincere devotee and I pray for his ever advancement in Krsna consciousness.
I am glad to note that your book about the origin of matter and life is progressing very well. This will be a great challenge.
From the Srimad-Bhagavatam we learn that the universe is like a tree with the roots being upwards. The pole star which is situated within the Asking question starts constellation is the root. The universe is pivoting around the pole star. That is one movement. The second movement is that the sun is revolving around the universe, or as if it were going around the tree. That is the second movement. The sun is not fixed. If this is proved, then their whole scientific theory collapses. According to them, the stars are all suns. The stars may have the same composition as the sun but they are not suns. The Brahma-samhita says that the sun is the king with unlimited light and temperature. The Srimad-Bhagavatam sublime literature describes all these things and it was written five thousand years ago. And they say that five thousand years ago there was no civilization. That Srimad-Bhagavatam has this information proves that Indian civilization is the oldest civilization.
I hope this meets you in good health.