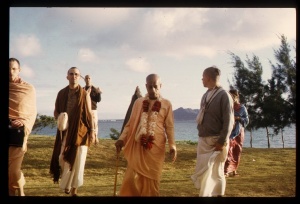 Akṣayānanda: Because there is no other religion.

Prabhupāda: Yes. There is no religion.

Akṣayānanda: That is actual religion, surrendering to Kṛṣṇa. Everything else is cheating.

Prabhupāda: Yes. Cheating others, cheating himself. Just like this animal sacrifice. The man who is sacrificing, he is cheating himself, and he is cheating others also. (break) . . . cheating, envious. Just like a man who is killing another man. So he is envious to himself as well as the man whom he is killing. Both. I am killing somebody; he is being killed. I am envious. And I forget that I'll be killed. Then I am envious to me also.

Brahmānanda: Yeah. Even one's own self-interest he is not taking care of.

Prabhupāda: So Upendra has not come?

Brahmānanda: He said he had to take a laxative last night.

Prabhupāda: Some way or other, he avoids. Eh? (break) . . .therefore forbidden to make one steady in Kṛṣṇa consciousness. So if one does not follow this thing, then his mind, he cannot control. It is not possible. Unless one can control the mind and the senses, he cannot be steady. That is māyā's trick, to become guided by the mind. That is māyā's trick. (break)

Prabhupāda: Yes. So let him go to hell. What can be done? (break) So his friend said, "Oh, you are drinking. You will go to hell." "Oh, my father is drinking." "Oh, he will go to hell." "My mother is also drinking." "Oh, she will go." Then brother, sister. . . "Then where is hell? We are going all there. If we can live together, where is hell? Let us go to hell. Doesn't matter." So your argument is that. "Because everyone is being cheated, then where is fault? I have been cheated, that's all. It is not hell. It is heaven." (laughter) Hare Kṛṣṇa.

Prabhupāda: No. That cannot be. You are one cheated and he is one cheater. How they can be one? (laughter) (break)

Trivikrama: The mind is cheating us.

Dhanañjaya: So all these cheaters are māyā's agents.

Prabhupāda: No, no, they are agent of Kṛṣṇa. (to passerby:) Hare Kṛṣṇa. Jaya. But because you want to cheat Kṛṣṇa, therefore they are cheating you. They are not your servant. Mama māyā: "My servant." Just like the police. Police is punishing you not on their own account. Because you are disobedient, you must be punished. Daivī hy eṣā guṇamayī (BG 7.14).

Brahmānanda: The moment we stop cheating Kṛṣṇa, then we can. . .

Prabhupāda: Then, immediately, he becomes friend. This is the way, going on. The whole arrangement is like that. So long we shall not surrender to Kṛṣṇa, we have to suffer so many ways, different species of life, different condition, different planets. This is going on. (break) . . .indirectly forcing that "You be Kṛṣṇa conscious. Otherwise you'll be punished." Why police is so unkind? Because the indirect way is that "You become lawful; otherwise you'll continue to be suffering by us." So intelligent person thinks of it, and he becomes Kṛṣṇa conscious. And those who are rascals, fools, bewildered, they think, "We shall adjust it by manufacturing every year new type of motorcars." Although there is accident. . . The increase of motorcar means increasing the death rate of public. Huh? And still they'll do that. It is becoming problem in cities in Europe and America. All roads and streets are always congested. They cannot drive even at ten miles speed. Still, they are increasing. Still, they are increasing motorcar.

Brahmānanda: They are passing laws now that you're not allowed to drive your car in the center of the cities.

Prabhupāda: Just see. They are keeping two miles away the car and coming to the office.

Brahmānanda: They make them come by trains and buses. Even though they have a car, they cannot use.

Guṇārṇava: And they park all the cars on top of the roofs of the buildings, Śrīla Prabhupāda.

Guṇārṇava: They're using all the roofs of the buildings as car parks to park the cars.

Trivikrama: And they are very much proud of making so many cars. Just like we were in Detroit. Remember, you were there? They had a big sign, "Seven million cars produced this year."

Brahmānanda: Yeah. They have a board with numbers, and each time a car is produced, it is put on the board. And it's a big board displayed in the city.