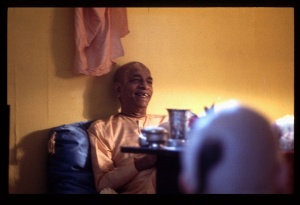 Prabhupāda: They make analysis: "This is good; this is bad." The whole thing is bad, they do not understand. Dvaite bhadrābhadra sakale samana, ei bhala ei manda saba manodharma. A mental concoction we analyze: "This is good; this is. . ." And because the whole population is such rascals, therefore we see whole world they are creating government, they are making this advancement, taking. . . Everything is spoiled. That they do not understand, that "We have tried so far, scientifically, and this way and that way. Why there are so many things disturbing and miserable?" The whole policy is to give you trouble.

That is the material nature. You must be always in trouble—ādhyātmika, ādhibhautika. "No." They will say, "No, this trouble is better than that trouble." (laughter) This is the. . . "This trouble is better than that trouble." Hare Kṛṣṇa. This Dr. Ghosh, he said. . . When he was student in Calcutta he was doctor of tropical medicine. So one English doctor was his professor, Colonel Mellar(?). So he was lecturing and. . . Now the friends have come to greet. He said that "In our country seventy-five percent, at least, students are infected with syphilis."

Prabhupāda: Syphilis, yes. So in India the syphilis is a very horrible disease. So he exclaimed, "Oh, it is horrible!" The doctor, that Colonel Mellar?(?), he was astonished: "Why you say it is horrible? In your country they suffer, ninety percent, from malaria. That's not horrible?" So the example is that when you are suffering, for a doctor, either you are suffering from malaria or from syphilis, we are suffering from disease. Why you say, "This disease is horrible than that disease"? Actually, this is the fact. Why should you discriminate? So he chastised him, that "As a medical man, you cannot say this disease is more dangerous than that. Every disease is dangerous." Actually you should take that. Suffering, three kinds of suffering—ādhyātmika, ādhibhautika . . . The suffering is there. If you say ādhyātmika suffering is better than ādhibhautika suffering, that is foolishness. Atyantika-duḥkha-nivṛttiḥ. Spiritual life means to end all kinds of suffering. That is spiritual life. Not that I get free myself from this kind of suffering and I accept that kind of suffering. This is not good conclusion. Atyantika-duḥkha. Duḥkhālayam aśāśvatam (BG 8.15). This place is duḥkhālayam, full of miseries. And Kṛṣṇa is canvassing, "Why you are suffering? Come to Me." This mercantile community, they are earning money for mitigating suffering, but for earning money they are accepting any means. In future he is creating field of another suffering. That he does not know. He thinks, "Now, if I get money somehow or other, my present sufferings will be mitigated." But he does not know that he is creating another field of suffering.

Brahmānanda: In the next life.

Brahmānanda: In the past. They have done something in the past and now they are suffering.

Prabhupāda: "In the past" means in this life.

Prabhupāda: So as soon as you do something wrong, you must suffer, either by government's laws or by nature's law.

Brahmānanda: They're thinking that "If I earn much money now, then later on in my life, everything will be very comfortable."

Prabhupāda: That's all right, but this is the fact. If you earn money by black market and if you are arrested, then your all comfort will be finished.

Aksayananda: He says, "I worked so hard for enjoyment, but I have no time to enjoy."

Prabhupāda: (chuckles) This is going on. They do not understand that this world is meant for suffering. We have discussed little in that topic with Śyāmasundara. Just like they invented the communistic idea. Does it mean the Communists are not suffering? They are suffering more. They have no liberty. They have lost their liberty, the whole people. They are so much pressed by the government that there is no liberty at all. The younger generation, they cannot go out, so much suffering. I may live even in a big house, but if you say, "You cannot go out. Then you'll be punished," that idea will be suffering—"Oh, I cannot go out."

Brahmānanda: We have one devotee, he escaped from Communist Hungary, and he was telling me all the story, how on the borders how much they keep the people from trying to escape. Even in Berlin, in Germany. . .

Brahmānanda: They have a system, automatic shooting, that if you cross a certain line, they have these rays of light, and if you break the ray of light, then automatically all machine guns start firing in the whole area. It's all done. . .

Prabhupāda: This is their scientific advancement.

Brahmānanda: They've made such a nice place that they're afraid the people will escape from it.

Prabhupāda: And they are thinking, "This system is for happiness."

Brahmānanda: If it's for happiness, then why prevent people from leaving?

Dhanañjaya: But even if they cross the line successfully, they'll only suffer misery on the other side too.

Brahmānanda: Yes. This is another point.

Dhanañjaya: They'll only suffer another kind of misery.

Brahmānanda: Some boys, they escaped from one country, I think Romania, and they came to our temple. They had heard about our movement, so they came to our temple. They stayed for a little while, but then they were wanting to leave. So they left, and immediately they were apprehended by the authorities in. . . I think it was in Sweden. And now they are put into camps, they cannot leave, they have to be processed, and practically they are again in jail. They have no freedom. They cannot get a job. They have no passport. It will take them years to get all the papers in order. They have to be investigated to see that they are not spies. So again they are still in the miserable condition.

Prabhupāda: So miserable condition. . . That is our conclusion, that either you remain this side or that side, it is miserable. By mental concoction you think that "This is better than that." Therefore Kṛṣṇa says frankly, sarva-dharmān parityajya (BG 18.66). That is only shelter. Mām upetya kaunteya duḥkhālayam aśāśvatam nāpnuvanti (BG 8.15). Take Kṛṣṇa's words as it is. Everything is there. He said, "This material world is duḥkhālayam; it is the place of suffering." (break) Industrialist, businessman, anyone, even ordinary man, actually everyone is suffering, but everyone is thinking, "I am happy." (break)

Brahmānanda: . . . because there is some sex pleasure, that makes it tolerable.

Prabhupāda: "Oh, yes. What is the wrong? It is pleasure." They take it as pleasure.

Brahmānanda: The priests. They're in the theological seminary, and they are priests, and they are saying that "It is pleasurable, so why not do it?"

(break) . . .he has disciple, guru, but he knows that he is suffering whole life for this institution. Still he'll not give it up.

Brahmānanda: He still has hope against hope.

Prabhupāda: Yes. He thinks that "I shall die peacefully if I expand the laboratory house, that I have given something to Vṛndāvana." Did he not say like that?

Prabhupāda: As if Caitanya Mahāprabhu asked him to give this institution to Vṛndāvana. Such a foolish person.

Brahmānanda: Yet he also admits that any boys who have intelligence, who are good students, they will go to Mathura and Agra and other places for education. Here only the village boys come.

Prabhupāda: Oh. Because he was criticized by our students in USA. (sound of bell) See? The bell is ringing nice. There was no such ringing in this quarter.

Prabhupāda: . . .fixed up so that thieves may not take it away? Not so securely.

Dhanañjaya: Well, they have. . . I'll make sure it is done today.

Prabhupāda: Oh. When I say? That means no brain. I am asking without seeing, and you are seeing for the last one week. You do not know it, that what is secure, what is not secure. That is the defect. Here thieves are very expert.

Dhanañjaya: But the chaukīdār is there at the front, guarding all night, and the bell is situated very high inside the dome.

Prabhupāda: Still should be secure. (indistinct discussion among devotees about bolts and soldering them) (break) . . .that in the temple these bells are stolen even it is secure. Therefore we shall be very careful.

Dhanañjaya: But there are always devotees, twenty-four hours.

Prabhupāda: (to passerby:) Jaya. Hare Kṛṣṇa. But our devotees, the first-class devotee, (chuckles) he is not very intelligent. He does not know what is secure, what is not secure. (break) . . .character that we are not very much concerned, but we have to live in a world which is very, very cunning. (pause) It is not yet half past six. (aside:) Hare Kṛṣṇa. (end)