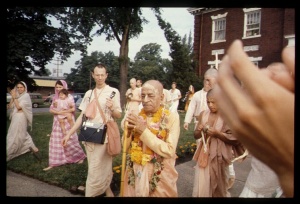 (translated into Spanish throughout)

Hanumān: Fraternity of yoga. Universal fraternity here in Mexico. They're the biggest. . . probably the biggest yoga society in South America. Their following one . . . (indistinct) . . .. . . guru, which is a European, he's called Dr. la Ferriere, and he's very interested to have your darśana.

Prabhupāda: (indistinct question aside) We are worshiping Kṛṣṇa, Yogeśvara. . .

Hṛdayānanda: (translates questions and answers throughout)

Hanumān: This is Mr. Coruna Cortez. He's the, the administrator of the Institute of Science and of Education. He said he is a philosopher.

Hanumān: And the lady here is a psychologist.

Hṛdayānanda: I can explain to them what I'm doing. (Spanish)

Prabhupāda: So Kṛṣṇa is the topmost yogī, Yogeśvara. (break)

Prabhupāda: And this girl is psychologist?

Hṛdayānanda: (asks her what her speciality is)

Hṛdayānanda: She works in an institute of psychology, and she is particularly studying human conduct, why people act the way they do, and she's also interested in learning something about our philosophy.

Prabhupāda: If you have studied about the subtle body of living entity?

Prabhupāda: First of all, this, this gross body made of five material elements—earth, water, air, fire, like that. This we can see with our eyes, but we cannot see the mind, intelligence and ego, although everyone knows there is mind, there is intelligence. So when this body is annihilated, the subtle body—mind, intelligence, ego—carries the soul to another gross body. This is the process of transmigration of the soul. Now, what do you think of this process?

Hṛdayānanda: She says in her. . . In the field of psychology also they admit the existence of forces beyond the gross elements, and although ordinarily they do not deal with that, she is very interested to know about it.

Prabhupāda: Yes. This is the law. Therefore in the Bhagavad-gītā it is said, "The soul is not annihilated after the destruction of the body." You find out that verse, na jāyate na mriyate va kadacit. Read it.

Prabhupāda: So the soul transmigrates to another body. That is the evolutionary process for anthropology, basic principle of anthropology. So in Darwin's theory there is no admission of the soul. Therefore it is imperfect. The soul transmigrates from one type of body to another type. And then there are 8,400,000 forms of body. So when we get this human form of body we get all intelligence. And we should utilize this intelligence how to stop this transmigration of the soul from one body to another. So what is their opinion?

Hṛdayānanda: (translating) If there's a certain criteria of proof or a certain evidence that we can know for certain that there actually is such transmigration of the soul?

Prabhupāda: Yes. Just like the baby is. . . the soul is transmigrated from baby's body to child's body, child's body to boy's body, boy's body to youthful body, so the body vanishes, and because the soul remains, he gets another body. Now I am old man. I remember I had a child's body, I was lying down. I quite remember it. But that body is not existing. So this is the example. Everyone has experience. This is transmigration of the soul from one body to another. And at the time of death, the psychological condition of the mind will carry me to a suitable body, and I shall enter into the womb of my mother through the semina of the father, and the mother will give that a particular type of body, and when it is completely manufacture, then I come out and begin my . . . (indistinct) . . .. . . again. Therefore we find varieties of forms, but in each and every form there is the soul.

Now, in the human form of life, we should utilize our intelligence that "This constant change of body, how it can be stopped?" And we should remain in our eternal body, because I am eternal, but psychologically I am simply changing different forms of body, and at the time of change of body I have to undergo so many sufferings. To remain within the womb of the mother for ten months in packed-up condition, it is very terrible punishment. But for each new birth, we have to undertake this terrible suffering. Sometimes nowadays they're being killed. So to avoid all these dangers, one should try to remain in his spiritual body so that there will be no more chance of accepting material. . . Find out this, janma karma me divyaṁ yo jānāti tattvataḥ, tyaktvā dehaṁ punar janma naiti mām eti kaunteya (BG 4.9).

Prabhupāda: What is the purport?

Hṛdayānanda: She wants to know what disciplines we have, what practices we have. Also, she had a misunderstanding. She said "for the beginners," so I was explaining it was the same for the beginners.

Prabhupāda: The main principle is, to understand spiritual subject matter, one must be sinless. You find that verse,

(break) . . .ess, more we can understand spiritual matter. Therefore among our students, the four principles. . . (break)

Hṛdayānanda: He says if to be sinless is not something more profound than simply restricting the body from some things; if there's not a more profound aspect of sinlessness.

Prabhupāda: The body is considered. . . Just like if you have got high fever, you cannot act your brain.

Prabhupāda: Act your brain. Similarly, this is also like fever, sinful fever, so you cannot act your brain for understanding higher, spiritual matters.

Hṛdayānanda: He's saying, "What is sin, then?"

Prabhupāda: That sin you have explained. These are the four principles of sinful life. This can be avoided. Just like these European, American boys, they were also addicted to these sinful activities, but now they have given up, and they are understanding Kṛṣṇa consciousness very nicely. Material life means sinful life. Therefore we have to act materially under regulation. Just like a man suffering from some disease, he has to live under the direction of the physician. Otherwise his sufferings will continue. (break)

Hṛdayānanda: I'm going to translate piece by piece so I can tell you exactly what he's saying. He's saying that he understands perfectly well that a human being should look for a way for self-control and to control the physical force within him, but there's also another dimension in the human being which is a social dimension, which also has to be taken care of.

Prabhupāda: Social platform, there must be four classes of men, divisions. Just like this body is divided into four departments—the brain, the arm, the belly and the leg—so the society should be divided into four divisions: the brain division, the arm division, the belly division and the leg division. Leg division means ordinary worker. And all of them should cooperate for keeping the body fit. If this system is followed, then the whole human society will be working very nicely. At the present moment there is no brain; therefore everything is chaotic.

Prabhupāda: Chaotic. So our Kṛṣṇa consciousness movement is creating some brain. If they follow, the whole society will be happy. A man may be very stout and strong, but if he has no good brain, it is useless. Similarly, at the present moment there is education, there is money and everything, but because there is no brain, the whole thing is in chaotic condition. The first defect is, in education, that the present leader, he does not know what is the aim of life. Neither the people know that there is reincarnation, or transmigration of the soul after death. They do not know. So basically they are brainless. So they cannot give guidance, and therefore the whole society is in chaotic condition. (long pause)

Hṛdayānanda: (translating) If our chanting is a form of prayer?

Prabhupāda: Yes. Chanting is a spiritual method for cleansing our heart. Because all dirty things are there in the heart, if the heart becomes cleansed, then we can understand things as they are. The first misunderstanding, that everyone is thinking that he is this body, this is due to ignorance. So when one is cleansed he can understand that he is not this body; he is separate from the body; he lives within this body. Therefore when the person leaves this body it is dead lump of matter. So people are giving more importance to the lump of matter than to the real person within the body. Just like a bird is within the cage, the cage is being washed very nicely and no food to the bird. Therefore the bird is in disturbed condition, and he's crying, khaa-khaa-khaa-khaa. This is going on. They're giving stress on the cage, not the bird within the cage. Neither do they know that the living being is within this material body.

Hṛdayānanda: (translating) Can someone achieve self-realization without a guru, or does he need a guru?

Prabhupāda: How do you think like that? Is there anything within this world which can be learned without guru? Even if you become an ordinary carpenter, you have to learn from an expert carpenter. So how you can imagine to learn the topmost subject matter without guru? This is. . . The Vedic injunction is, therefore, tad-vijñānārthaṁ sa gurum evābhigacchet śrotriyaṁ brahma-niṣṭham, samit-pāṇiḥ (MU 1.2.12), like that. We must have a bona fide guru to train us in the understanding of spiritual matter. Guru means who knows the thing, who can teach you. That is guru—not a humbug guru, but guru means one who knows. Tattva-darśinaḥ, one who has seen the truth, he can become guru. Find this verse,

Prabhupāda: So I have to go, bathroom. Give them prasādam.