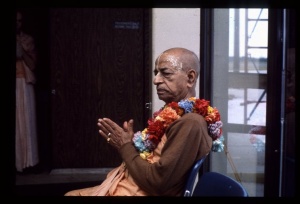 You can play Hari hari biphale janama. I shall. . . I'll sing before you.

Devotee: If they cannot stay still, they must be taken out.

Prabhupāda: Otherwise how it is happening that this place was a church and nobody was coming, so much so that they had to sell it to others? We purchased it. When I first came here to see this church, there was nobody. The place is the same. The people is the same. I have not brought men from India. Why it is crowded now? This is the proof that in everyone's heart Kṛṣṇa consciousness is there. Nitya-siddha kṛṣṇa-bhakti sādhya kabhu naya. It is not artificial way of taking something sentimentally. Otherwise, how in my absence all these boys and girls are maintaining the status quo very nicely? I am very glad. That is required. This is the proof that in everyone's heart there is Kṛṣṇa consciousness.

Udaya means awakening. It is not an artificial way of giving something, imposing something to become Kṛṣṇa conscious. No. The Kṛṣṇa consciousness is there, in everyone's heart. It has to be awakened by certain process. That process is śravaṇa-kīrtana, nine different types of devotional service.

So anywhere. . . It doesn't matter, either in India or outside. People thought like that, that Kṛṣṇa consciousness is the monopoly business for the Indians or for the Hindus. They were thinking like that: "It cannot be preached. Nobody will take it." But I thought, "If Kṛṣṇa is God, why it will not be taken by everyone? It must be taken." So I was not very much hopeful to become successful. When I was in Boston port, I wrote one poetry that "I do not know why I have been brought here. How these people will take to Kṛṣṇa consciousness? As soon as I will say these four regulative principles, they will ask me to go away." (laughter) It is very difficult for this country or this part of the world to follow the four principles of regulative life: no illicit sex, no gambling, no meat-eating and no intoxication. Even Lord Zetland, when he was given this formula for becoming advanced in spiritual consciousness, he flatly replied, "It is impossible for us." Yes. But impossible thing can be made possible by the grace of Kṛṣṇa. That is possible—Kṛṣṇa is all-powerful—provided we are serious and sincere. That is the main business. We must be very serious and sincere. Then Kṛṣṇa will give you intelligence.

That is said in the Bhagavad-gītā:

Anyone who is engaged very seriously, satata-yuktānām, twenty-four hours, thinking, "Kṛṣṇa, how can I serve you. . .?" This is the only business. Man-manā bhava mad-bhakto mad-yājī māṁ namaskuru (BG 18.65). Four things: Always think of Kṛṣṇa. . . This Hare Kṛṣṇa means, "O the energy of Kṛṣṇa, O Kṛṣṇa, please engage me in Your service." I have given service to this material world so much, but I could not satisfy the master, neither I am satisfied. Everyone is serving: society, friendship, love, family, country. But none of them are satisfied. None of them sat. . . Even your President, he could not satisfy you. You had to drag him down. Neither he could satisfy himself. Even Gandhi could not satisfy his countrymen. Although he gave so much service, he was shot dead. So this is the material world. You cannot satisfy anyone, neither you become satisfied, materially engaged. This is called material world. We may show some artificial satisfaction, but there cannot be satisfaction in the material world. First of all you have to take it as axiomatic truth that there is no happiness and there cannot be any satisfaction in this material world. Then you'll make. . ., spiritually advance. If you have got little faith still that "I can be satisfied; I can be happy materially," then that is māyā's influence. That is māyā's influence. There is no possibility.

So if you want satisfaction, then you have to take to Kṛṣṇa consciousness. Compulsory: "You must." There is no other alternative. Therefore Narottama dāsa Ṭhākura sings, hari hari biphale janama goṅāinu: "My dear Lord Kṛṣṇa, I have simply wasted my time." Actually, anyone who has not taken Kṛṣṇa consciousness—simply wasting time. This is fact, scientifically true. But they do not know it. Māya-mohita. Mohitaṁ nābhijānāti mām ebhyaḥ param avyayam (BG 7.13). Being covered by the illusory energy, they do not know the background of this gigantic cosmic manifestation. That is Kṛṣṇa.

So intelligence means to find out Kṛṣṇa. In the Īśopanisad it is stated, that "My dear Lord, please wind up Your these dazzling rays so that I can actually see Your face." Within brahma-jyotir the Kṛṣṇa is there. So Kṛṣṇa can be seen only by service. You cannot challenge Kṛṣṇa, "Kṛṣṇa, come here. I shall see You." No. That is not possible. You have to submit. Therefore Kṛṣṇa says, sarva-dharmān parityajya mām ekaṁ śaraṇaṁ vraja (BG 18.66). That is the way. You have to surrender. So long you don't surrender, that is up to you. Kṛṣṇa will not force you. He is almighty, He can force you, but He does not do that. He says, "You do this. If you do not do it, that is your business. But I say you do it."

So Kṛṣṇa says everything in the Bhagavad-gītā. People are simply misled by so-called rascals, yogīs, svāmīs, incarnation, magician, juggler, bluffer. But they come and go. They cannot do anything, because they are themself cheated. They are themself cheated, so how they can do good to others? So don't be members of the society of cheaters and cheated. Then the life will be spoiled. Our only request, this Kṛṣṇa consciousness movement, is, "Take to Kṛṣṇa consciousness." Kṛṣṇa kṛṣṇa kṛṣṇa kṛṣṇa kṛṣṇa kṛṣṇa kṛṣṇa he. This is our. . . Caitanya Mahāprabhu has taught, always chant Kṛṣṇa, Kṛṣṇa or Hare Kṛṣṇa, as it is convenient. That is the way of. . ., the simple way. There is no difficulty. There is no loss. These boys and girls took "Kṛṣṇa, Kṛṣṇa," so there was no loss, but now everything is gain. So why not make an experiment that chant Hare Kṛṣṇa always?

This process, I am very glad that you are following despite all impediments. The Deity is nicely decorated, and the Deity is worshiped, and He's pleased upon you. Be blessed. Continue this process. Don't deviate. Strictly follow the regulative principle, chant Hare Kṛṣṇa at least sixteen rounds, and you'll be happy. There is no doubt about it. You can experience. It is not an imposition. Don't leave this process. Then in this life you will be able to understand Kṛṣṇa.

It is very difficult to understand Kṛṣṇa.

To understand Kṛṣṇa is very, very difficult, even for the siddhas, those who have attained perfection of life. Kṛṣṇa said, yatatām api siddhānām (BG 7.3). First of all, out of many, many millions of person, one endeavors to become siddha, perfect. That is also not very easy, siddha. Siddha means perfectly self-realized. Ahaṁ brahmāsmi. That is siddhi. That is the siddhi of human life. The dogs', cats' life, they cannot understand that "I am Brahman," ahaṁ brahmāsmi. They think, "I am dog." So if you think like that—"I am American," "I am Indian," "I am Hindu," "I am Muslim"—then you are no better than the dogs and cats, because they are also thinking like that. But when you think yourself that "I am not this body; I am spirit soul," that is called brahma-bhūtaḥ. Brahma-bhūtaḥ prasannātmā na śocati na kāṅkṣati (BG 18.54). After that, after being brahma-bhūtaḥ-samaḥ sarveṣu bhūteṣu mad-bhaktiṁ labhate parām—then bhakti life begins. After being liberated, after being self-realized, then bhakti begins. And as soon as bhakti begins, then you understand Kṛṣṇa. Bhaktyā mām abhijānāti yāvān yaś cāsmi tattvataḥ (BG 18.55).

You cannot understand Kṛṣṇa by any other process—by jñāna, by yoga, by tapasya, by karma, by sacrifice, by charity. You cannot understand. Simply, Kṛṣṇa says, bhaktyā mām abhijānāti. If you want to know Kṛṣṇa as He is, then you have to take to this process, very simple process, man-manā bhava mad-bhakto mad-yājī māṁ namaskuru (BG 18.65): "Always think of Me, become My devotee, worship Me and offer your respectful obeisances unto Me." Four things. That is here. Chant Hare Kṛṣṇa. That will be thinking of Kṛṣṇa, man-manā. And unless you are devotee, you cannot engage your time in that way. Then if you chant Hare Kṛṣṇa mahā-mantra, automatically you become devotee. Then you worship Deity. Unless you are a devotee, you cannot worship Kṛṣṇa.

The atheist will say, "They are worshiping some idol." No. That is not fact. They do not know that here is Kṛṣṇa personally; He is accepting the devotees' service in a manner in which we can serve Him at the present moment. If Kṛṣṇa shows you the virāṭ-rūpa, then you cannot serve Him. Where you'll get the dress of the virāṭ-rūpa? The whole world's cloth factory will fail you. (laughter) Therefore Kṛṣṇa is accepted, a four-feet-small Deity, so that you can acquire Kṛṣṇa's dress within your means. You can put Kṛṣṇa within your means. That is Kṛṣṇa's mercy. Therefore it is forbidden, arcye viṣṇu śilā-dhīḥ (Padyāvalī 115). If any rascal thinks that in the Viṣṇu form, as stone, as wood; vaiṣṇave jāti-buddhiḥ, devotees considered as belonging to certain nation, caste—these are nārakī-buddhi. (break) This is not to be done. It is fact that here is Kṛṣṇa. Very kindly, just to show me favor, He has come in this form. But He's Kṛṣṇa; He's not stone. Even it is stone, that is also Kṛṣṇa, because there is nothing else but Kṛṣṇa, anything. Without Kṛṣṇa, there is no existence. Sarvaṁ khalv idam brahma (Chāndogya Upaniṣad 3.14.1). So Kṛṣṇa has got the power that even in His so-called shape of stone, He can accept your service. That is Kṛṣṇa.

So you have to understand these things, and if you understand properly what is Kṛṣṇa, this much qualification will make you fit for being liberated even in this life.

So these things are to be understood properly, and one can understand properly when he's pure devotee. Otherwise not. Nāhaṁ prakāśaḥ sarvasya yoga-māyā-samāvṛtāḥ (BG 7.25): "I am not exposed to everyone." Why He should be exposed to everyone? When He's pleased, He will reveal Himself to you. Sevonmukhe hi jihvādau svayam eva sphuraty adaḥ (Brs. 1.2.234). You cannot ask the sun to appear immediately. When he is pleased, he will appear in the morning. Similarly, you have to please Kṛṣṇa so that He will appear before you and talk with you and bless you.

Devotees: Jaya! All glories to His Divine Grace!