741218 - Letter to Rupanuga written from Bombay 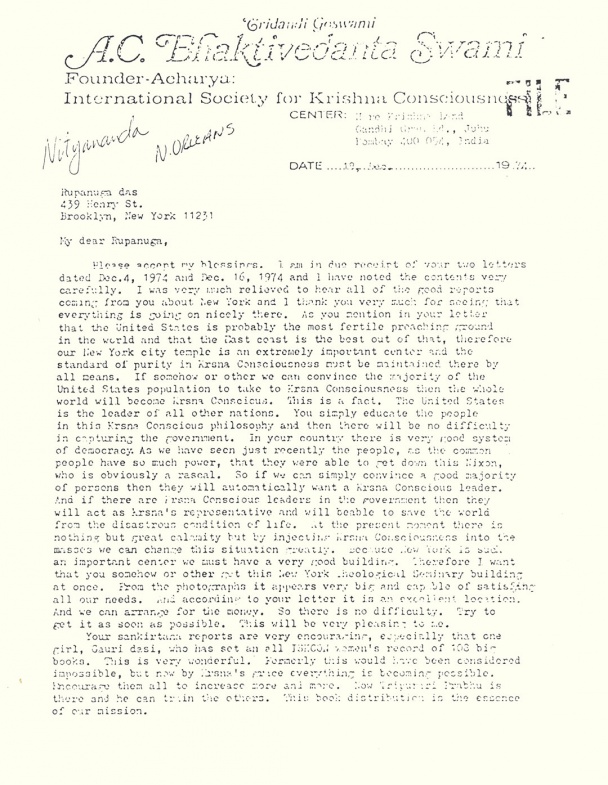 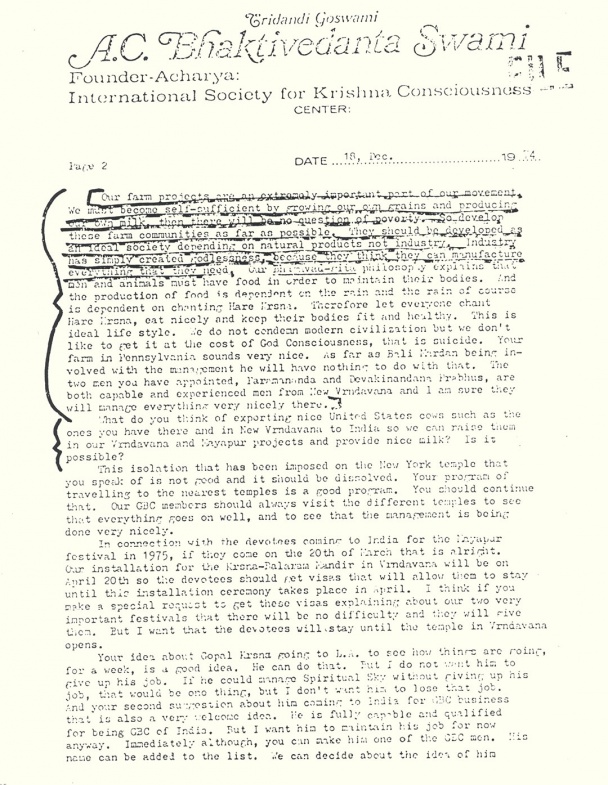 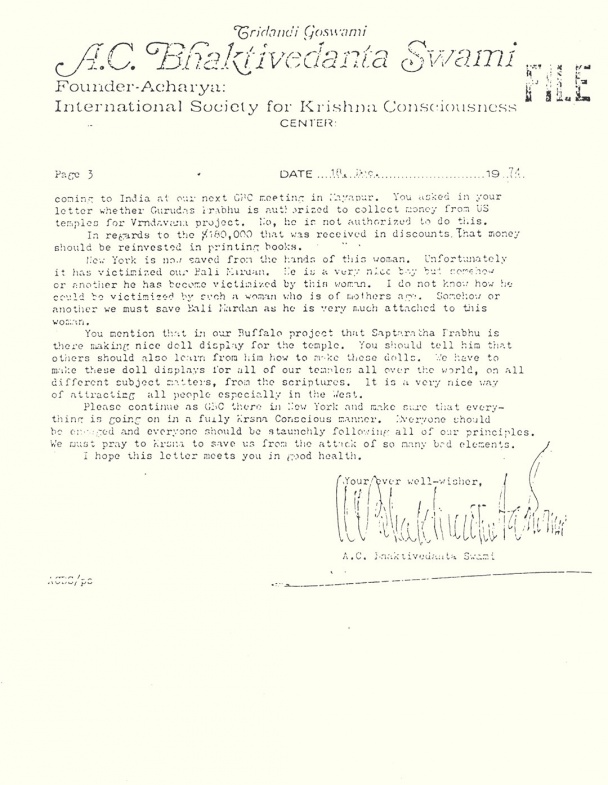 Please accept my blessings. I am in due receipt of your two letters dated Dec. 4, 1974 and Dec. 16, 1974 and I have noted the contents very carefully. I was very much relieved to hear all of the good reports coming from you about New York and I thank you very much for seeing that everything is going on nicely there. As you mention in your letter that the United States is probably the most fertile preaching ground in the world and that the East coast is the best out of that, therefore our New York city temple is an extremely important center and the standard of purity in Krsna Consciousness must be maintained there by all means. If somehow or other we can convince the majority of the United States population to take to Krsna Consciousness then the whole world will become Krsna Conscious. This is a fact. The United States is the leader of all other nations. You simply educate the people in this Krsna Conscious philosophy and then there will be no difficulty in capturing the government. In your country there is very good system of democracy. As we have seen just recently the people, as the common people have so much power, that they were able to get down this Nixon, who is obviously a rascal. So if we can simply convince a good majority of persons then they will automatically want a Krsna Conscious leader. And if there are Krsna Conscious leaders in the government then they will act as Krsna's representative and will be able to save the world from the disastrous condition of life. At the present moment there is nothing but great calamity but by injecting Krsna Consciousness into the masses we can change this situation greatly. Because New York is such an important center we must have a very good building. Therefore I want that you somehow or other get this New York Theological Seminary building at once. From the photographs it appears very big and capable of satisfying all our needs. And according to your letter it is an excellent location. And we can arrange for the money. So there is no difficulty. Try to get it as soon as possible. This will be very pleasing to me.
Your sankirtana reports are very encouraging, especially that one girl, Gauri dasi, who has set an all ISKCON women's record of 108 big books. This is very wonderful. Formerly this would have been considered impossible, but now by Krsna's grace everything is becoming possible. Encourage them all to increase more and more. Now Tripurari Prabhu is there and he can train the others. This book distribution is the essence of our mission.

Our farms projects are an extremely important part of our movement. We must become self-sufficient by growing our own grains and producing our own milk, then there will be no question of poverty. So develop these farm communities as far as possible. They should be developed as an ideal society depending on natural products not industry. Industry has simply created godlessness, because they think they can manufacture everything that they need. Our Bhagavad-gita philosophy explains that men and animals must have food in order to maintain their bodies. And the production of food is dependent on the rain and the rain of course is dependent on chanting Hare Krsna. Therefore let everyone chant Hare Krsna, eat nicely and keep their bodies fit and healthy. This is ideal life style. We do not condemn modern civilization but we don't like to get it at the cost of God Consciousness, that is suicide. Your farm in Pennsylvania sounds very nice. As far as Bali Mardan being involved with the management he will have nothing to do with that. The two men you have appointed, Paramananda and Devakinandana Prabhus, are both capable and experienced men from New Vrndavana and I am sure they will manage everything very nicely there.
What do you think of exporting nice United States cows such as the ones you have there and in New Vrndavana to India so we can raise them in our Vrndavana and Mayapur projects and provide nice milk? Is it possible?
This isolation that has been imposed on the New York temple that you speak of is not good and it should be dissolved. Your program of travelling to the nearest temples is a good program. You should continue that. Our GBC members should always visit the different temples to see that everything goes on well, and to see that the management is being done very nicely.
In connection with the devotees coming to India for the Mayapur festival in 1975, if they come on the 20th of March that is alright. Our installation for the Krsna-Balaram Mandir in Vrndavana will be on April 20th so the devotees should get visas that will allow them to stay until this installation ceremony takes place in April. I think if you make a special request to get these visas explaining about our two very important festivals that there will be no difficulty and they will give them. But I want that the devotees will stay until the temple in Vrndavana opens.
Your idea about Gopala Krsna going to L.A. to see how things are going, for a week, is a good idea. He can do that. But I do not want him to give up his job. If he could manage Spiritual Sky without giving up his job, that would be one thing, but I don't want him to lose that job. And your second suggestion about him coming to India for GBC business that is also a very welcome idea. He is fully capable and qualified for being GBC of India. But I want him to maintain his job for now anyway. Immediately although, you can make him one of the GBC men. His name can be added to the list. We can decide about the idea of him

coming to India at our next GBC meeting in Mayapur. You asked in your letter whether Gurudas Prabhu is authorized to collect money from US temples for Vrndavana project. No, he is not authorized to do this.
In regards to the $180,000 that was received in discounts. That money should be reinvested in printing books.
New York is now saved from the hands of this woman. Unfortunately it has victimized our Bali Mardan. He is a very nice boy but somehow or another he has become victimized by this woman. I do not know how he could be victimized by such a woman who is of mothers age. Somehow or another we must save Bali Mardan as he is very much attached to this woman.
You mention that in our Buffalo project that Saptaratha Prabhu is there making nice doll display for the temple. You should tell him that others should also learn from him how to make these dolls. We have to make these doll displays for all of our temples all over the world, on all different subject matters, from the scriptures. It is a very nice way of attracting all people especially in the West.
Please continue as GBC there in New York and make sure that everything is going on in a fully Krsna Conscious manner. Everyone should be engaged and everyone should be staunchly following all of our principles. We must pray to Krsna to save us from the attack of so many bad elements.
I hope this meets you in good health.