741208 - Letter to Hansadutta written from Bombay 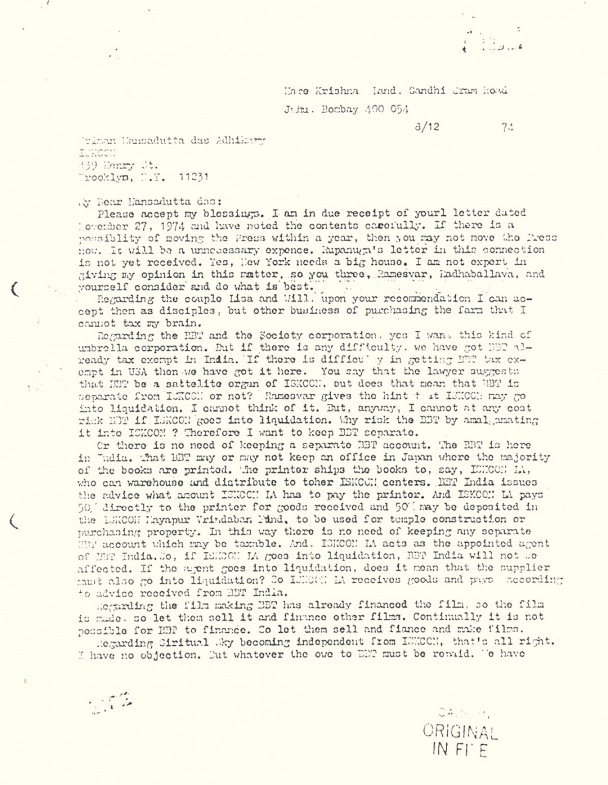 Letter to Hansadutta das (Page 1 of 2) 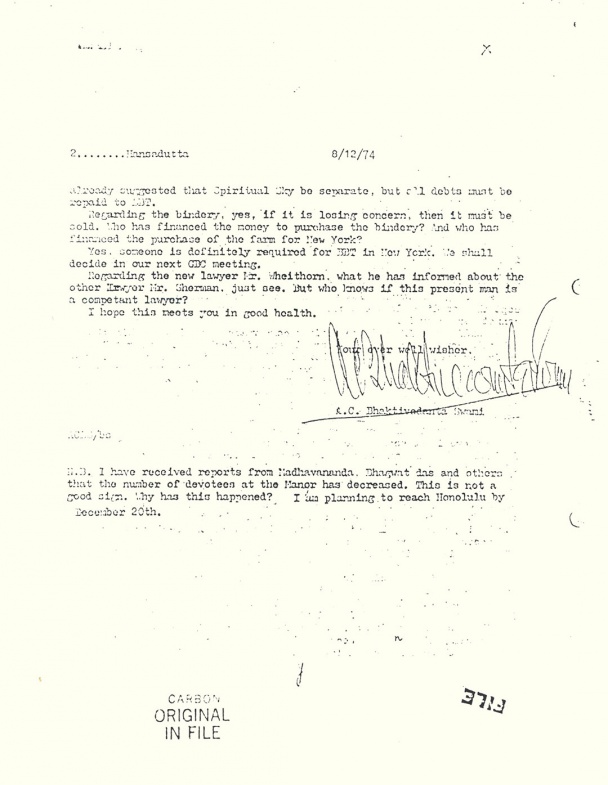 Letter to Hansadutta das (Page 2 of 2)

My Dear Hansadutta das:
Please accept my blessings. I am in due receipt of your letter dated November 27, 1974 and have noted the contents carefully. If there is a possibility of moving the Press within a year, then you may not move the Press now. It will be a unnecessary expense. Rupanuga's letter in this connection is not yet received. Yes, New York needs a big house. I am not expert in giving my opinion in this matter, so you three, Ramesvar, Radhavallava, and yourself consider and do what is best.
Regarding the couple Lisa and Will, upon your recommendation I can accept them as disciples, but other business of purchasing the farm that I cannot tax my brain.
Regarding the BBT and the Society corporation, yes I want this kind of umbrella corporation. But if there is any difficulty, we have got BBT already tax exempt in India. If there is difficulty in getting BBT tax exempt in USA then we have got it here. You say that the lawyer suggests that BBT be a satellite organ of ISKCON, but does that mean that BBT is separate from ISKCON or not? Ramesvar gives the hint that ISKCON may go into liquidation. I cannot think of it. But, anyway, I cannot at any cost risk BBT if ISKCON goes into liquidation. Why risk the BBT by amalgamating it into ISKCON? Therefore I want to keep BBT separate.
Or there is no need of keeping a separate BBT account. The BBT is here in India. That BBT may or may not keep an office in Japan where the majority of the books are printed. The printer ships the books to, say, ISKCON LA, who can warehouse and distribute to other ISKCON centers. BBT India issues the advice what amount ISKCON LA has to pay the printer. And ISKCON LA pays 50% directly to the printer for goods received and 50% may be deposited in the ISKCON Mayapur Vrindaban Fund, to be used for temple construction or purchasing property. In this way there is no need of keeping any separate BBT account which may be taxable. And, ISKCON LA acts as the appointed agent of BBT India. So, if ISKCON LA goes into liquidation, BBT India will not be affected. If the agent goes into liquidation, does it mean that the supplier must also go into liquidation? So ISKCON LA receives goods and pays according to advice received from BBT India.
Regarding the film making BBT has already financed the film, so the film is made, so let them sell it and finance other films. Continually it is not possible for BBT to finance. So let them sell and fiance and make films.
Regarding Spiritual sky becoming independent from ISKCON, that's all right. I have no objection. But whatever they owe to BBT must be repaid. We have

already suggested that Spiritual Sky be separate, but all debts must be repaid to BBT.
Regarding the bindery, yes, if it is losing concern, then it must be sold. Who has financed the money to purchase the bindery? And who has financed the purchase of the farm for New York?
Yes, someone is definitely required for BBT in New York. We shall decide in our next GBC meeting.
Regarding the new lawyer Mr. Whitehorn, what he has informed about the other lawyer Mr. Sherman, just see. But who knows if this present man is a competent lawyer?
I hope this meets you in good health.

N.B. I have received reports from Madhavananda, Bhagwat das and others that the number of devotees at the Manor has decreased. This is not a good sign. Why has this happened? I am planning to reach Honolulu by December 20th.