741125 - Letter to Ramesvara written from Bombay 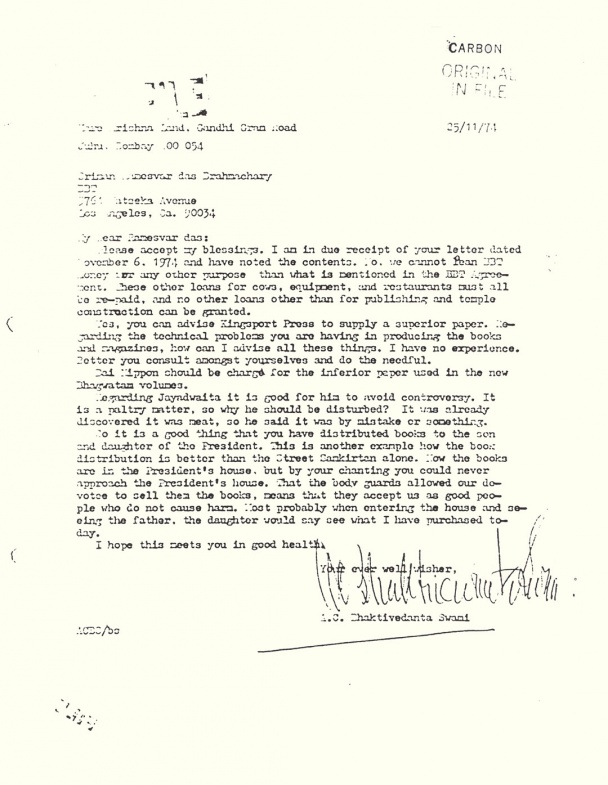 My Dear Ramesvar das:
Please accept my blessings. I am in due receipt of your letter dated November 6, 1974 and have noted the contents. No, we cannot loan BBT money for any other purpose than what is mentioned in the BBT Agreement. These other loans for cows, equipment, and restaurants must all be re-paid, and no other loans other than for publishing and temple construction can be granted.
Yes, you can advise Kingsport Press to supply a superior paper. Regarding the technical problems you are having in producing the books and magazines, how can I advise all these things. I have no experience. Better you consult amongst yourselves and do the needful.
Dai Nippon should be charged for the inferior paper used in the new Bhagwatam volumes.
Regarding Jayadvaita it is good for him to avoid controversy. It is a paltry matter, so why he should be disturbed? It was already discovered it was meat, so he said it was by mistake or something.
So it is a good thing that you have distributed books to the son and daughter of the President. This is another example how the book distribution is better than the Street Sankirtana alone. Now the books are in the President's house, but by your chanting you could never approach the President's house. That the body guards allowed our devotee to sell them the books, means that they accept us as good people who do not cause harm. Most probably when entering the house and seeing the father, the daughter would say see what I have purchased today.
I hope this meets you in good health.