741120 - Letter to Sadajeewatlalji written from Bombay 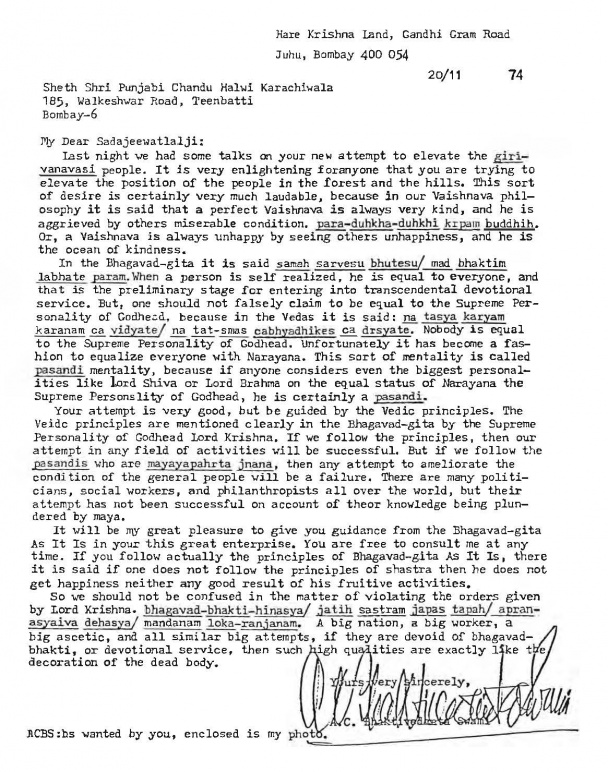 My Dear Sadajeewatlalji:
Last night we had some talks on your new attempt to elevate the girivanavasi people. It is very enlightening for anyone that you are trying to elevate the position of the people in the forest and the hills. This sort of desire is certainly very much laudable, because in our Vaishnava philosophy it is said that a perfect Vaishnava is always very kind, and he is aggrieved by others miserable condition. para-duhkha-duhkhi krpam buddhih. Or, a Vaisnava is always unhappy by seeing others unhappiness, and he is the ocean of kindness.
In the Bhagavad-gita it is said samah sarvesu bhutesu/ mad bhaktim labhate param. When a person is self realized, he is equal to everyone, and that is the preliminary stage for entering into transcendental devotional service. But, one should not falsely claim to be equal to the Supreme Personality of Godhead, because in the Vedas it is said: na tasya karyam karanam ca vidyate/na tat-samas cabhyadhikas ca drsyate. Nobody is equal to the Supreme Personality of Godhead. Unfortunately it has become a fashion to equalize everyone with Narayana. This sort of mentality is called pasandi mentality, because if anyone considers even the biggest personalities like Lord Siva or Lord Brahma on the equal status of Narayana the Supreme Personality of Godhead, he is certainly a pasandi.
Your attempt is very good, but be guided by the Vedic principles. The Vedic principles are mentioned clearly in the Bhagavad-gita by the Supreme Personality of Godhead Lord Krishna. If we follow the principles, then our attempt in any field of activities will be successful. But if we follow the pasandis who are mayayapahrta jnana, then any attempt to ameliorate the condition of the general people will be a failure. There are many politicians, social workers, and philanthropists all over the world, but their attempt has not been successful on account of their knowledge being plundered by maya.
It will be my great pleasure to give you guidance from the Bhagavad-gita As It Is in your this great enterprise. You are free to consult me at any time. If you follow actually the principles of Bhagavad-gita As It Is, there it is said if one does not follow the principles of shastra then he does not get happiness neither any good result of his fruitive activities.
So we should not be confused in the matter of violating the orders given by Lord Krishna. bhagavad-bhakti-hinasya/ jatih sastram janas tapah/ apranasyaiva dehasya/ mandanam loka-ranjanam. A big nation, a big worker, a big ascetic, and all similar big attempts, if they are devoid of bhagavad-bhakti, or devotional service, then such high qualities are exactly like the decoration of the dead body.

A.C. Bhaktivedanta Swami
ACBS:hs wanted by you, enclosed is my photo.