741107 - Letter to Rupanuga written from Bombay 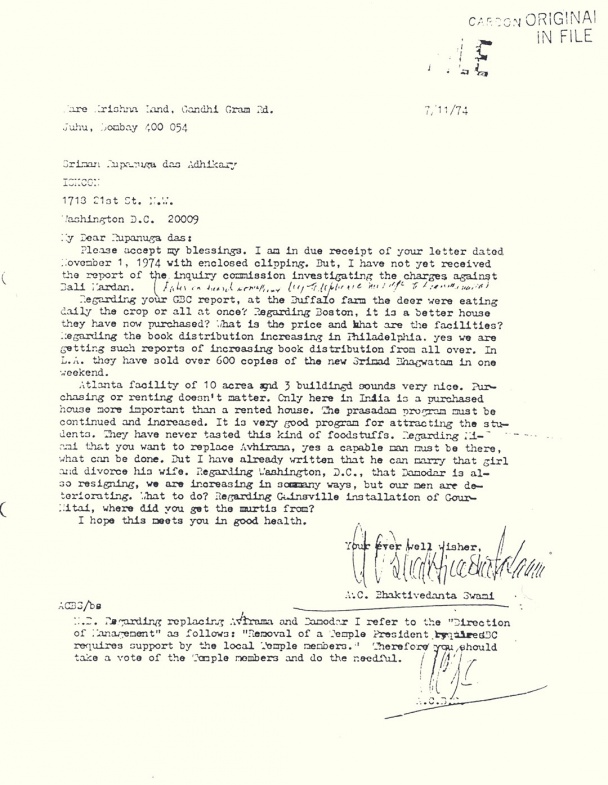 My Dear Rupanuga das:
Please accept my blessings. I am in due receipt of your letter dated November 1, 1974 with enclosed clipping. But, I have not yet received the report of the inquiry commission investigating the charges against Bali Mardan. (Later on heard something by telephone message to Brahmananda) [handwritten]
Regarding your GBC report, at the Buffalo farm the deer were eating daily the crop or all at once? Regarding Boston, it is a better house they have now purchased? What is the price and what are the facilities? Regarding the book distribution increasing in Philadelphia. yes we are getting such reports of increasing book distribution from all over. In L.A. they have sold over 600 copies of the new Srimad-Bhagawatam in one weekend.
Atlanta facility of 10 acre and 3 building sounds very nice. Purchasing or renting doesn't matter. Only here in India is a purchased house more important than a rented house. The prasadam program must be continued and increased. It is very good program for attracting the students. They have never tasted this kind of foodstuffs. Regarding Miami that you want to replace Avhirama, yes a capable man must be there, what can be done. But I have already written that he can marry that girl and divorce his wife. Regarding Washington, D.C., that Damodar is also resigning, we are increasing in so many ways, but our men are deteriorating. What to do? Regarding Gainesville installation of Gour-Nitai, where did you get the murtis from?
I hope this meets you in good health.

ACBS/bs
N.B. Regarding replacing Avirama and Damodar I refer to the "Direction of Management" as follows: "Removal of a Temple President by GBC requires support by the local Temple members." Therefore you should take a vote of the Temple members and do the needful.