741025 - Letter to Ramesvara written from Mayapur 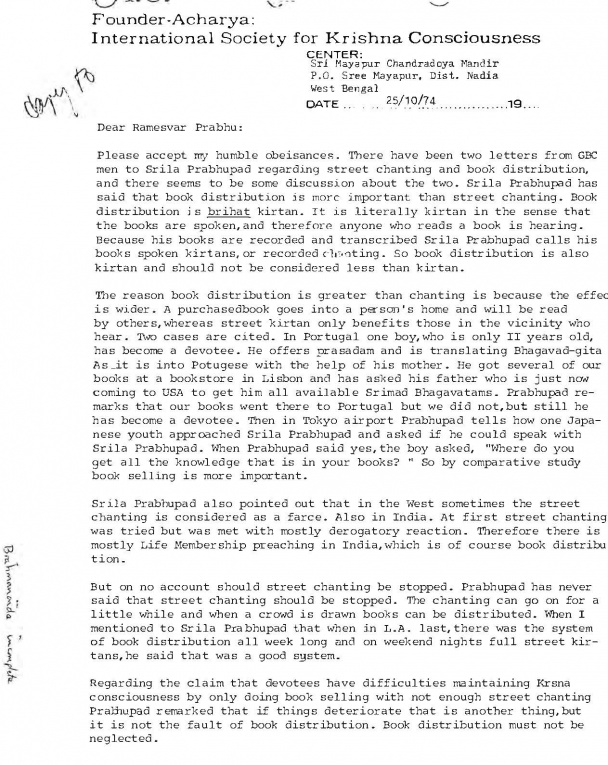 The reason book distribution is greater than chanting is because the effect is wider. A purchased book goes into a person's home and will be read by others, whereas street kirtan only benefits those in the vicinity who hear. Two cases are cited. In Portugal one boy, who is only 11 years old, has become a devotee. He offers prasadam and is translating Bhagavad-gita As It Is into Portuguese with the help of his mother. He got several of our books at a bookstore in Lisbon and has asked his father who is just now coming to USA to get him all available Srimad-Bhagavatams. Prabhupad remarks that our books went there to Portugal but we did not, but still he has become a devotee. Then in Tokyo airport Prabhupad tells how one Japanese youth approached Srila Prabhupad and asked if he could speak with Srila Prabhupad. When Prabhupad said yes, the boy asked, "Where do you get all the knowledge that is in your books?" So by comparative study book selling is more important.

Srila Prabhupad also pointed out that is the West sometimes the street chanting is considered as a farce. Also in India. At first street chanting was tried but was met with mostly derogatory reaction. Therefore there is mostly Life Membership preaching in India, which is of course book distribution.

But on no account should street chanting be stopped. Prabhupad has never said that street chanting should be stopped. The chanting can go on for a little while and when a crowd is drawn books can be distributed. When I mentioned to Srila Prabhupad that when in L.A. last, there was the system of book distribution all week long and on weekend nights full street kirtans, he said that was a good system.

Regarding the claim that devotees have difficulties maintaining Krsna consciousness by only doing book selling with not enough street chanting, Prabhupad remarked that if things deteriorate that is another thing, but it is not the fault of book distribution. Book distribution must not be neglected.

Srila Prabhupada received an advance copy of S.B. 3:4 which was printed in the USA in five weeks with the quality practically as good as Japan. Prabhupada was also informed that the index of the Third Canto will be a separate volume, as well as for the Fourth Canto which will have a separate volume index. When we mentioned to His Divine Grace that this is the system of encyclopedias to publish separate volumes for the index he said that we could advertise his Srimad-Bhagavatam as "The Encyclopedia of Spiritual Life." S.B. 4:4 has also been given to the American printer and three remaining volumes of S.B. 3:3, 4:2, and 4:3 have already been printed in Japan. That makes 13 volumes of S.B. not including the index volumes!

Prabhupada's translation of Caitanya Caritamrta is almost finished, only two more chapters left in the whole book. Then he will resume S.B. starting with Canto Five. This was Srila Prabhupada's reason for taking up C.C. by working on C.C. the Press was given time to publish all the backlog of S.B. that was piling up. By exact coincidence Prabhupada is finishing C.C. just as they have finished publishing all of S.B. through the Fourth Canto. Now as Srila Prabhupada resumes S.B., they can publish the C.C.

Here at Sridhama Mayapur, Srila Prabhupada gave further impetus to the main temple project. It will be a 30 story skyscraper temple based on the following verse of Brahma-samhita:

There will be the main temple that will extend upwards the full 30 stories, as well as different levels depicted in doll tableaus, first the material world, devi dhama; then mahesa dhama, then vaikuntha dhama, and finally goloka vrindaban. Already a competent engineering firm in Calcutta, which is the only firm in India to use an IBM computer in its calculations, has been contacted for making the foundation. "It will not be difficult", assured Srila Prabhupada. He further revealed, "I have named this temple Sri Mayapur Candrodaya Mandir, the Rising Moon of Mayapur. Now make it rise, bigger and bigger until it becomes the full moon. And this moonshine will be spread all over the world. All over India they will come to see. From all over the world they will come...Krishna will supply the money. Don't bother. The money will come either locally or from USA."

When informed that the government here will pay 2/3 of the cost for road and bridge development if 1/3 is put up locally, Prabhupada said we should immediately inform them that he will put up 1 crore (dollars 1 million), and they can give 2 crores to develop the entire Mayapur area. He wants roads parks, gardens, like the descriptions of Dvaraka in the Krishna Book. Prabhupada personally surveyed the sites for a large lake as well as the second residential building. He called for a wall with a large front gate to be built. Work on a spacious kitchen complex near the Bhaktisiddhanta Road is progressing, but Prabhupada ordered that a second story should be added so that women and householders can live there and that the kitchen operation in the present residential building be moved there so that additional guest rooms can be added in the present kitchen and women's quarters. A dollar 25,000.00 Prasadam Distribution Pavilion attached to the new kitchen complex will also be built. Gargamuni Swami has pledged half the cost, and Hamsaduta Prabhu has sent dollars 4,000.00 from Germany and promises more. 1,000 people will be able to be served prasada at one sitting.

Turning to philosophy, Prabhupada had some things to say about his godbrothers. "He is just sitting on Chaitanya Mahaprabhu's birthplace waiting for people to come and give money. He has taken that now this is his own hereditary property. He has taken it that he and Bhaktisiddhanta Saraswati Thakur were associated together in an enterprise, and now that the senior partner is gone, it is his property.

It was pointed out to Srila Prabhupada that of all the temples in Mayapur our mangol aratik at 4:15 A.M. is the first of the day and that at Chaitanya Math it is suspected to take place after sunrise. When asked if he wanted to see the new temple for Bhaktivinode Thakur that has been constructed near the entrance at Yoga Pith, Prabhupada replied, "I do not want to see how he has made Bhaktivinode Thakur the gatekeeper."

Within our movement Mayapur temple is the first. "Nowhere do we have such a nice temple in such an open place," Prabhupada remarked on one morning walk. In Bombay a shipment of 2,000 kilos of Australian ghee has been sent by Madhudvisa Maharaj. It will be sold to the Indian temples and used for the festival for the opening of the Vrindaban temple to be held after the Gour Purnima festival in April. For the Mayapur festival ghee will be supplied by each and every devotee who comes. Everyone should bring one tin of ghee. It can be brought for personal use.

I mentioned to His Divine Grace that air fares will be increased next year due to the petrol shortage, and this might affect the number of devotees who attend the Gour Purnima festival. Prabhupada asked me, "How much foodstuffs have you eaten in your whole life?" Quite a lot I had to admit, not understanding why he asked this question. "And what is the cost of all these foodstuffs?" That I could not say. "So, do you stop eating because there is so much cost? No. You go on eating and whatever is the cost, you spend. The principle is that if you have got money, then you can spend, but if you do not have money, then you cannot spend." So as many as possible should surely come if the money is there.

One evening Srila Prabhupada revealed what he said was his theory, that the moon is covered with ice, to explain why the moonshine is so pleasant. Moonrays are very soothing, and we find in many places describing the pleasing effect of the moon, nitai-pada-kamala, koti candra-susitala, ye chayaya jagat judaya. This is because the moon must be covered with ice.

In the morning after his lecture from the Prayers of Queen Kunti in Srimad-Bhagavatam, Srila Prabhupada takes great pleasure in the kirtan with the devotees singing and dancing very nicely. The large temple area affords ample space for everyone to take part in the [indistinct] dancing, and as we move to and fro up and down the temple Prabhupada pelts us with handfuls of flowers. Afterwards he circumambulates the Deity house of Radha Madhava three times, each time ringing the temple bells three times and turning around completely in front of the Deities.

On October 30 Prabhupada will start for Bombay. There on Hare Krishna Land he will stay in a flat that has been newly constructed for him. There is one report that the land there is now worth one crore, whereas we paid only 14 1/2 lakhs for it.

More in my next. I hope this meets you in good health.

N.B. Srila Prabhupada's tentative plans are to remain in India through the April temple opening in Vrindaban, and then start for the USA.

What needed to be repaired on that Adler typewriter I sent with Jayatirtha? It is a brand new one that Paramhansa Swami purchased in U.K.