740929 - Letter to Mukunda written from Mayapur 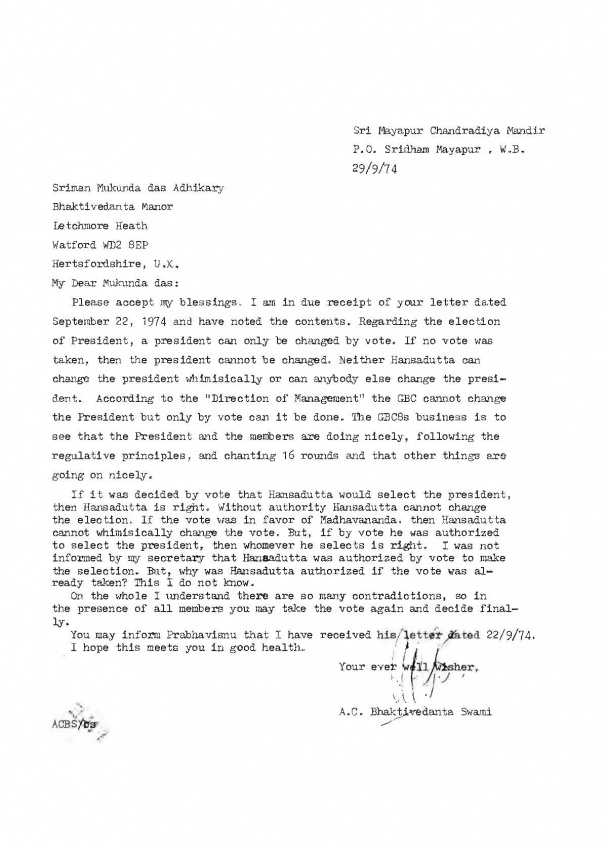 Sriman Mukunda das Adhikary
Bhaktivedanta Manor
Letchmore Heath
Watford WD2 8EP
Hertsfordshire, U.K.
My Dear Mukunda das:
Please accept my blessings. I am in due receipt of your letter dated September 22, 1974 and have noted the contents. Regarding the election of President, a president can only be changed by vote. If no vote was taken, then the president cannot be changed. Neither Hansadutta can change the president whimsically or can anybody else change the president. According to the "Direction of Management" the GBC cannot change the President but only by vote can it be done. The GBC's business is to see that the President and the members are doing nicely, following the regulative principles, and chanting 16 rounds and that other things are going on nicely.
If it was decided by vote that Hansadutta would select the president then Hansadutta is right. Without authority Hansadutta cannot change the election. If the vote was in favor of Madhavananda, then Hansadutta cannot whimsically change the vote. But, if by vote he was authorized to select the president, then whomever he selects is right. I was not informed by my secretary that Hansadutta was authorized by vote to make the selection. But, why was Hansadutta authorized if the vote was already taken? This I do not know.
On the whole I understand there are so many contradictions, so in the presence of all members you may take the vote again and decide finally.
You may inform Prabhavisnu that I have received his letter dated 22/9/74.
I hope this meets you in good health.