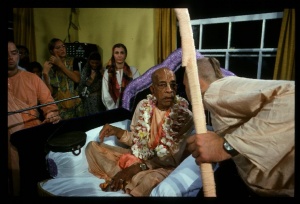 Prabhupāda: . . . the business of the representative of Kṛṣṇa to push the nipple. Because they know what is the necessity. The whole world is upset for want of Kṛṣṇa consciousness. This is the necessity. It is not a, I mean to say, whimsical sporting. It is the necessity. But they do not know. It is a very responsible task. That is called prayojana. Is it clear? What do you think? Huh?

Svarūpa Dāmodara: If they know, they'll be all bhaktas.

Prabhupāda: They do not know.

Devotee: They think it is necessary to gratify the senses.

Prabhupāda: They think that, that by gratifying senses . . . therefore they are having the same sex at home, again going to the naked dance. They think, "This thing will be able to give me happiness." But that is not giving, actually. Then they become mad.

So therefore it is advised that tṛpyanti neha kṛpanā bahu-duḥkha-bhājaḥ. By itching, by satisfying the senses, itching sensation, their troubles and miserable condition increasing. That they do not know. Increasing. Tṛpyanti neha kṛpanā bahu-duḥkha-bhājaḥ. Bahu means much; duḥkha means miserable condition. Therefore one who is sensible: kaṇḍūtivan manasijaṁ viṣaheta dhīraḥ. The dhīra, one is sober, he understands, "What I am doing? I am simply trying to eat, and the disease is increasing. Therefore it must be stopped." This is called dhīra. That is called dhīra. That is, one word is used, dhīra, in Kumāra-sambhava, that Pārvatī was induced. Lord Śiva was in meditation, and the necessity was that Kārttikeya . . . Kārttikeya means "With the semina of Lord Śiva and Pārvatī's," what is called, "semen, they mix together, the child will be born. He can kill these demons." Therefore Kārttik . . . so Lord Śiva was engaged in meditation. So Pārvatī was engaged to worship the genital of Lord Śiva. That's . . . therefore they introduced this, Śiva-liṅga is worshiped. Śiva-liṅga. So when was worshiping, a young girl touching the genital, but he was sitting without any disturbance. Therefore he has been described, dhīra. Dhīra. One who is not disturbed by the sex impulse, even in the presence of very beautiful young girl, he is called dhīra.

So kaṇḍūtivan manasijaṁ viṣaheta dhīraḥ. One has to become dhīra. That is wanted. Just like Haridāsa Ṭhākura. Twice he was induced by very beautiful young girl at dead of night. But he remained . . . "Yes, I'll satisfy you." He turned . . . that is called dhīra. There is another place. The dhīra word is used in the Bhagavad-gītā.

Brahmānanda: Even by death he is not disturbed.

Prabhupāda: Not disturbed. So one has to become dhīra. Then he'll be satisfied. Then he'll be satisfied. Then . . . that is the prayojana-siddhi, to finish this business, material business, and completely prepare for going back to home, back to Godhead. Therefore Caitanya Mahāprabhu was very strict. He therefore advised, niṣkiñcanasya bhagavad-bhajanonmukhasya (CC Madhya 11.8). Bhagavad-bhajan, devotional service of the Lord, means paraṁ paraṁ jigamiṣor bhava-sāgarasya: going to the other side of this material ocean. So one who is serious about going to the other side of this ocean, for him, two things are very dangerous. Viṣayināṁ sandarśanam atha yoṣitām ca hā hanta hā hanta viṣa-bhakṣaṇato 'py asādhu (CC Madhya 11.8). It is dangerous; it is most heinous activities than drinking poison. What are these? Viṣayināṁ sandarśanam, to mix with the . . . or . . . mix very intimately with the materialistic person and to have association with woman with sense purpose. Yoṣitām. To see woman is not bad, but as soon as one sees woman with a sensual purpose, that is very condemned. That is condemned. So unless one becomes dhīra, he cannot do that. So we have to finish this business of material sensuous engagement and become dhīra. Then we are fit candidates for going back to home, back to Godhead.

Svarūpa Dāmodara: That, that dhīra cannot be attained artificially.

Prabhupāda: No, that is not possible. Paraṁ dṛṣṭvā nivartate (BG 2.59). Unless you find something better than the sex life, you cannot be dhīra. Therefore Kṛṣṇa's name is Madana-Mohana. Madana means Cupid. Cupid is enchanting everyone. Everyone is enchanted by Cupid. Madana-dahana. And Kṛṣṇa is Madana-Mohana; He enchants Cupid. And Rādhārāṇī is Madana-mohana-mohinī, (S)he enchants Kṛṣṇa. Madana-Mohana-mohinī.

Prabhupāda: One is Madana, and Kṛṣṇa enchants Madana. Kṛṣṇa is so beautiful that Madana becomes enchanted by Kṛṣṇa. And Rādhārāṇī is so beautiful that Kṛṣṇa becomes enchanted. That is spiritual sex. That is not so ordinary. Therefore the attraction of Rādhā and Kṛṣṇa is not ordinary thing. Rādhā-kṛṣṇa-praṇaya-vikṛtir hlādinī-śaktir (CC Adi 1.5). This is the spiritual energy, display of spiritual energy. But the sahajiyās, they take as material attractions. As we are attracted, men and women, similarly, they take the Rādhā and Kṛṣṇa attraction is like that . . . (break) (end)